A New Jersey Democrat told constituents that illegal immigrants are necessary to do jobs that Americans are not willing to take (like "mowing our beautiful lawns") during an appearance at a coffee shop in his district. Rep. Tom Malinowski (D.) made the remarks Tuesday at a "Coffee With Your Congressman" event, according to the Washington Examiner.

"Because the reason this happens is there are a lot of jobs in our community that like it or not, for better or worse, Americans are not willing to take," Malinowski told the crowd. Who do you think is taking care of our seniors? Fifty percent of the elder care workers in the state of New Jersey are immigrants, most of them legal, most of them documented."

"Who do you think is mowing our beautiful lawns in Sommerset County? We don't usually ask, but a lot of those workers are undocumented. There are just not a lot of kids, sorry, from Montgomery High who are going to be doing that full time. You guys are going into robotics for goodness sakes," the freshman representative added to laughter from the audience.

"You're a bunch of elitists. You're not going to mow lawns," he said at the end of the video.

Malinowski currently represents the 7th District of New Jersey, an area in the northern area of the state. It is also the fifth wealthiest congressional district in the country by median income, according to Politico. 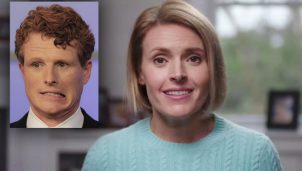 Another Kennedy Bites the Dust