A D.C.-based watchdog says J Street PAC is "skirting" FEC guidelines for the specific type of PAC it is operating.

J Street PAC is the political spending arm of the nonprofit group J Street, a Middle East advocacy organization viewed by many as being far-left and anti-Israel.

Most PACs are standalone entities, meaning they exist independently of any nonprofit, corporation, or union. As such, those PACs can also accept donations from the general public.

However, J Street PAC is different. In 2011 it filed an amendment to its organizational structure with the FEC declaring that it was a "connected" PAC, registered as a "separate segregated fund." This was a change from how the PAC was originally established in 2007.

A connected PAC operates similar to a union PAC. Unions cannot give directly to political candidates from their general fund due to campaign finance laws and so they set up a side PAC.

Connected PACs benefit from being able to use money from their "sponsor" institution to defray some of the expenses of running the PAC, such as by sharing overhead expenses.

These PACs can only accept donations from persons who are members of the connected institution.

According to FEC rules, a person is a member of a PAC if they maintain a relationship with the sponsoring organization by having a "significant financial attachment, such as a significant investment or ownership stake," in the sponsor institution, or by having the right to vote on issues like the election of board members, or the approval of an annual budget.

However, J Street PAC appears to be using the lowest possible standard of membership when allowing donations to the PAC. When one visits the PAC's website, a pop-up window appears asking the visitor to become a member by submitting only their email address. The same pop-up window also states that membership is free. 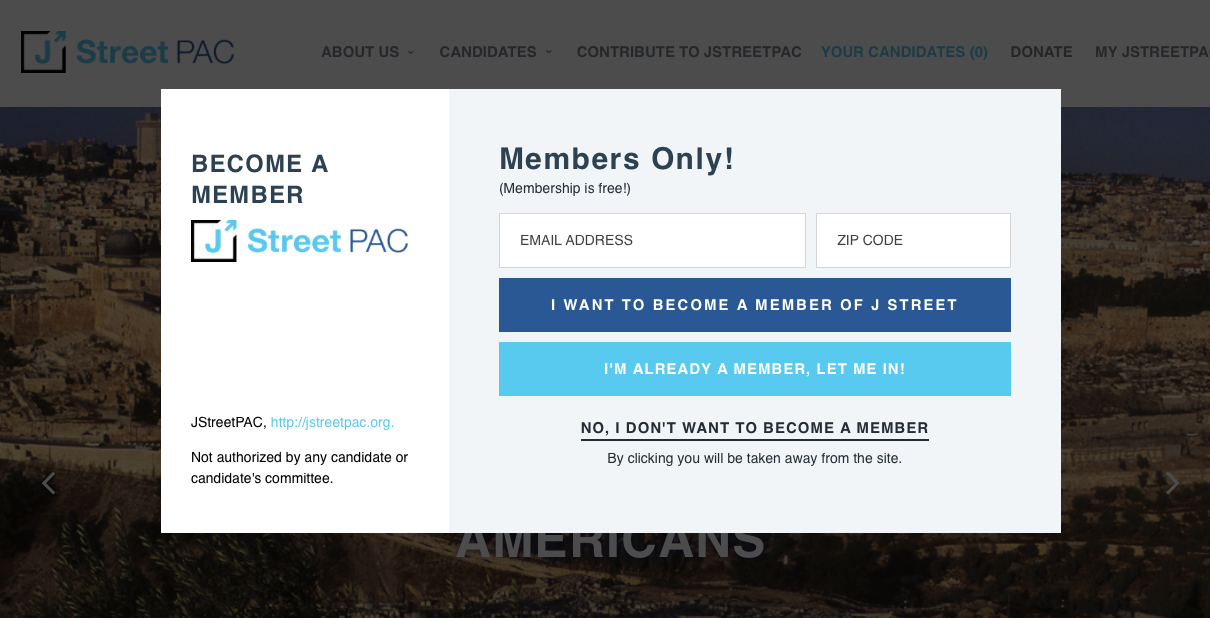 It is possible J Street PAC may have saved tens or hundreds of thousands of dollars by having the underlying nonprofit 501(c)4 organization simply known as J Street share or combine some of the expenses for the PAC's operation. At the same time, while "connected" PACs are prohibited from soliciting donations from members of the public, J Street appears to be doing essentially that, using only the email submission as the basis for membership.

"Because separately segregated PACs like J Street PAC, by law, are not allowed to solicit contributions from the public, it appears that they are trying to skirt campaign finance laws in this area—which call for strict rules related to membership requirements for connected PACs," said Kendra Arnold, executive director for the Foundation for Accountability and Civic Trust (FACT), a watchdog group in D.C.

"J Street PAC claims they only raise money from J Street members," she added. "If J Street PAC has no qualifications for membership other than an email address, they are improperly using the guise of membership to solicit donations from the general public. Such behavior completely eviscerates the membership requirement."

J Street did not return a request for comment on questions about the PAC's operation, including questions about what the PAC required for membership other than an email address.

FEC filings for the PAC show a steep reduction in operating costs once the PAC changed its status with the FEC from a standalone PAC to a connected PAC in March of 2011.

In the current 2017-18 campaign finance cycle, a recent filing by J Street PAC shows more than 3000 donations under $100, with hundreds being in the $3-$5 range. The volume of small donations may be indicative of fundraising campaigns aimed at the general public, but different only in that it first required an email address from the recipient to ensure they were a "member" in order to meet the FEC requirement.

A J Street "Leadership Manual" acknowledges that the PAC is a "membership" PAC, and then points to an appendix in the document for more information. However, the appendix makes no reference to what constitutes membership, and what rights someone might have as a member, such as voting privileges.