Pressure Grows for an Audit of Iowa Caucus Results

The Iowa Democratic Party is rejecting calls for it to perform an audit of caucus results from last week despite the discrepancies that have been reported since it declared that Hillary Clinton narrowly defeated Sen. Bernie Sanders (I., Vt.).

The pressure for an audit grew on Thursday evening when the Des Moines Register editorial board wrote that the "refusal to undergo scrutiny or allow for an appeal reeks of autocracy" and that the "Iowa Democratic Party must act quickly to assure the accuracy of the caucus results, beyond a shadow of a doubt."

The final tally announced by the Iowa Democratic Party awarded 700.59 delegates to Clinton and 696.82 to Sanders, but the results coming out of numerous precincts have been called into question.

"Too many accounts have arisen of inconsistent counts, untrained and overwhelmed volunteers, confused voters, cramped precinct locations, a lack of voter registration forms and other problems," wrote the Des Moines Register. "Too many of us, including members of the Register editorial board who were observing caucuses, saw opportunities for error amid Monday night’s chaos."

One of the paper’s reporters confirmed with an election official that Clinton was incorrectly given an extra delegate that should have been given to Sanders.

NEW: Tally for Grinnell 1 reported by @iowademocrats as Sanders 18/Clinton 8 but they now acknowledge 19/7 is correct, precinct sec tells me

Dr. Andy McGuire, chair of the state party, has maintained that the results are final and that head counts from each precinct will not be released. She has argued in her own Des Moines Register editorial that the head counts are irrelevant.

"These are not contests of popular raw votes—nor do we think they should be," wrote McGuire. "Asking for raw vote totals demonstrates a misunderstanding of our process. As does asking for a recount." 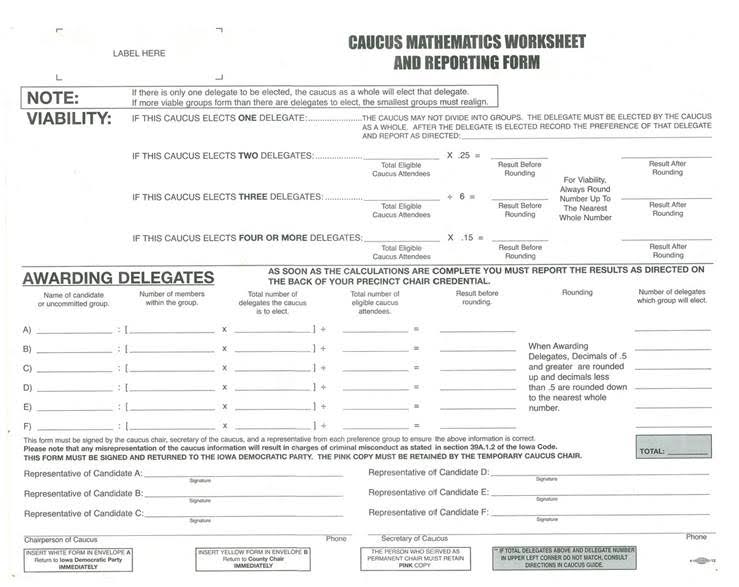 Although McGuire charged that the Des Moines Register’s call for audit stems from a "misunderstanding" of the process, a look at the caucus worksheet that was used in each precinct indicates that the raw head count from each county would have been recorded—and would be necessary knowledge for anyone trying to ensure that a mistake like the one that happened in Grinnell did not occur.

"The Iowa Democratic Party determines its winner based not on a head count, like in the Republican caucuses, but on state delegate equivalents, tied to a math formula," the editorial said. "And there was enough confusion, and untrained volunteers on Monday night, that errors may have been made."

"We feel like that there’s a very, very good chance that there is [error]," a Sanders spokeswoman said. "It's not that we think anybody did anything intentionally, but human error happens."

The Des Moines Register went as far as to accuse McGuire of favoritism toward Clinton, the party’s favored candidate.

"[McGuire's] actions only confirm the suspicions, wild as they might be, of Sanders supporters. Their candidate, after all, is opposed by the party establishment—and wasn’t even a Democrat a few months ago," wrote the editorial board. "So her path forward is clear: Work with all the campaigns to audit results. Break silly party tradition and release the raw vote totals."

The paper’s charge of favoritism is backed up by reports that McGuire is a longtime Clinton supporter who has owned a custom license plate reading "HRC2016" since at least 2013.

McGuire held a fundraiser in Des Moines for Clinton's failed presidential campaign in 2008 and has been a political donor to Clinton since 2005.

A spokesperson for the Iowa Democratic Party did not respond to a request for comment by press time.