Perk of the office occasionally becomes a political liability

House Democrats are currently outspending their Republican colleagues by a two-to-one margin on taxpayer-funded car leases despite being in the minority, according to recent expense reports published by the Chief Administrative Officer of the House.

The ability to lease a car on the taxpayer's tab is an optional perk available to members of the House, but not the Senate.

Democrats' spending on leases totaled $65,669 compared to $29,994 for Republicans in the third quarter of 2017. Nineteen Republicans expensed their lease during this timeframe, compared to 34 Democrats.

The Washington Free Beacon analyzed data going back one year. Democrats outspent Republicans by more than 2 to 1 in the last two quarters, but the gap was smaller during the two quarters prior to that. However, the Democrats still outspent the GOP in each quarter. 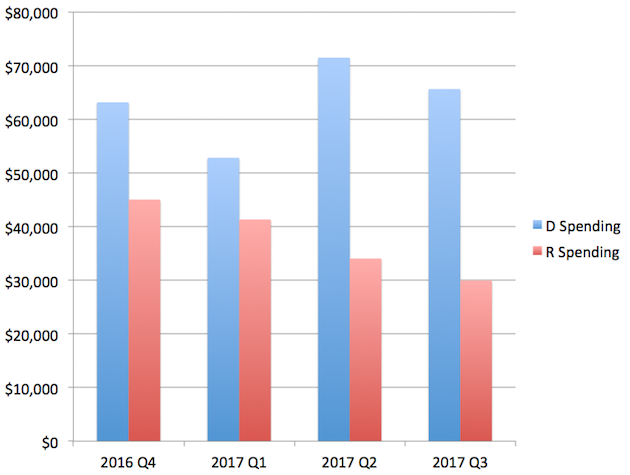 Republicans have 45 more members in the lower chamber, according to the House of Representatives Press Gallery website, as of January 16, 2018. The number fluctuates depending on resignations and other factors.

Every so often, the issue of leasing cars crops up as a political question for lawmakers.

"Members are permitted to use their member's representational allowance for any purpose that's allowed under the House rules, which include leasing cars," said Tom Schatz, president of Citizens Against Government Waste.

"However, there are many members that don't spend all of their [allowance] money and give some of it back to the treasury. That would be very difficult to do for House Democrats based on the amount of money they're spending on car leases."

"Certainly, there shouldn't be twice as much spent by one party as opposed to the other, especially when there are 45 fewer members of that party," Schatz concluded.

New York Republican Peter King said the political pitfalls outweighed the benefits for a 2008 article by the New York Times on the issue of car leases.

"There are so many ethical issues people can raise," King said at the time. "I felt it just wasn't worth the trouble or the aggravation. With the issues that people can raise against you, I just figured it didn't make sense."

King stopped expensing his vehicle through the House in 2004.

Generally speaking, the House rulebook states that leased vehicles are not to be used as the member's personal vehicle, although minor exceptions apply based on the circumstance of the use. Additionally, the House restricted the type of cars available for lease to certain low-emissions vehicles approved by the Environmental Protection Agency in 2007.

The base salary for a member of Congress is $174,000, but members in leadership make more.

Data available through the House reports only shows the amount of the lease, but not the make and model of vehicle, although the make can sometimes be determined by the lending institution.

The analysis of car leases did not account for vehicles for the Speaker of the House or the Minority Leader.

Update 1:04 p.m.: A previous version of this article mistakenly stated the expense reports were published by the Clerk of the House of Representatives.