Attorney General: 'This prosecution is about consequence and accountability. No one is above the law.'

A former Democratic congressman who served only a brief mayoral tenure after being elected last year, Filner was charged with felony false imprisonment and two misdemeanor counts of battery, the San Diego Superior Court and state prosecutors said.

"This conduct was not only criminal, it was also an extreme abuse of power," said state Attorney General Kamala Harris, who filed the complaint against Filner. "This prosecution is about consequence and accountability. No one is above the law."

Under the terms of a plea agreement, Filner will serve three months of home confinement and will be on probation for three years, the attorney general said in a statement.

Filner resigned in August as part of a settlement with the city over how to handle a lawsuit filed by his former press secretary, Irene McCormack Jackson, who was among at least 18 women who accused the 71-year-old politician of making unwanted sexual advances. She is so far the only one to sue him.

The first Democrat elected to lead the relatively conservative Southern California city in years, Filner's fall from grace raises questions about which party voters will favor in a special election to choose his successor, set for next month.

Under the terms of his plea agreement, Filner is prohibited from ever again seeking elected office and will not earn a public pension for the time between the commission of the felony, which Harris said was March 6, 2013, and the date of his resignation, August 23.

He will not be able to vote, serve on a jury or own a firearm while he is on probation, and he will be required to undergo mental health treatment, Harris said.

Filner has apologized to San Diego residents but said no sexual harassment allegation against him had been proven.
In the race to replace him, City Councilman Kevin Faulconer is now considered the presumptive Republican nominee. Former U.S. Marine Nathan Fletcher, who was a moderate Republican before switching parties after finishing third in the 2012 mayoral primary, is the presumptive Democratic nominee. 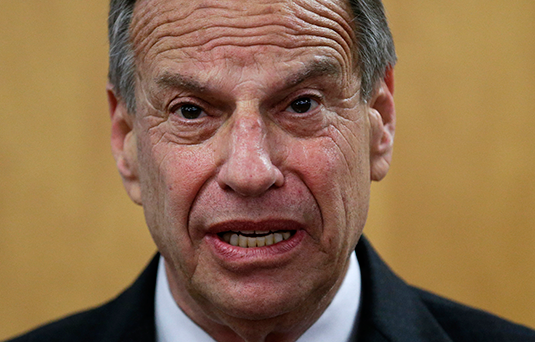