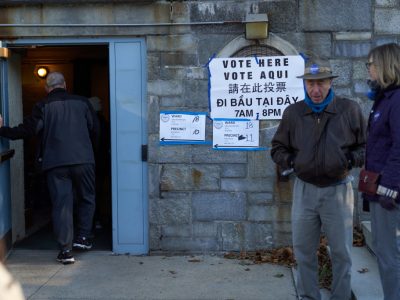 Nearly all of the money raised by Warren's joint fund has gone to her campaign committee and PAC; little to Mass. state party

Sen. Elizabeth Warren (D., Mass.), who has positioned herself on the frontlines of campaign finance reform, can circumvent campaign finance limits with the use of a joint fundraising committee that was quietly established earlier this year.

Nearly all the money raised to date by the Massachusetts senator's joint fundraising committee was transferred to her campaign committee, Federal Election Commission records show.

A joint committee, which may be established between two or more candidates, political action committees, or party committees, allows donors to write one large check for the amount they would be allowed to give if they were to separately contribute to each of the individual entities that make up a particular joint fund.

Paperwork was filed Jan. 26 to launch the Elizabeth Warren Action Fund, a joint fundraising committee that consists of Elizabeth for MA Inc., the senator's campaign committee; PAC for a Level Playing field, her political action committee; and the Massachusetts Democratic State Committee, the committee of the Democratic Party in Massachusetts.

An overwhelming majority of the money raised to date by the joint fundraising committee has been transferred to Warren's campaign war chest, records show.

Of the $1.25 million disbursed by the committee, $1,023,611.15—or 82 percent of all disbursements—ended up going to Elizabeth for MA, her campaign committee. PAC for a Level Playing Field, Warren's PAC, received $124,254.10 from the committee. The Massachusetts Democratic State Committee received only $11,665.63 from the Elizabeth Warren Action Fund.

"For Elizabeth Warren, it's always 'do as I say, not as I do,' and her fundraising practices are no different," Scott Sloofman, press secretary for America Rising PAC, told the Washington Free Beacon.

"While she lectures even those in her own party about collecting donations, she has no problem quietly bending the complicated rules of the campaign finance system to funnel the bulk of her donations back into her Senate race," he said.

Joint fundraising committees are a common practice among politicians. However, Warren, who has become a fundraising powerhouse in the Democratic Party, has repeatedly railed against money in politics and has made numerous calls for campaign finance reform.

"Thanks to the Supreme Court, our system of elections is riddled with corruption. Money floods our political system, money that lets a handful of billionaires shape who gets into Congress and may decide who sits in the White House," Warren said in January 2016.

"Washington works just great for a handful of wealthy individuals and powerful corporations that manipulate the system to benefit themselves," Warren added. "But for everyone else, Washington's not working so well. And if we don't change that, this rigged political game will break our country."

Warren's campaign did not return a request for comment by press time.