The Democratic party developed an elaborate, multi-year operation in the 1990s that deployed thousands of activists to covertly mold public opinion using talk radio, according to documents from the Clinton Presidential Library.

The Democratic National Committee (DNC), with the blessing of the Clinton White House, launched the Talk Radio Initiative (TRI) ahead of the 1996 campaign. The program trained thousands of operatives to call in to radio shows, conduct surveillance of their contents, and secretly disseminate Democratic talking points while posing as ordinary listeners.

"Volunteers must be able to keep the project confidential so as not to create the image of a 'Democratic conspiracy' to infiltrate Detroit area talk radio shows," a 1995 TRI guide prepared by Michigan Democrats said. "Democratic performance in the 1996 elections will no doubt be affected by the success or failure of this initiative."

Radio show hosts long suspected that someone was training so-called "seminar callers" to inundate their shows with sympathetic callers. Lars Larson, a host in the Pacific Northwest since the mid-1990s, recalled being on the receiving end of many such calls, but was not aware that many may have been trained by the DNC.

"You would get calls, an hour apart, from different people with different voices and different names, but they would talk the same lines. So close that you knew that this was not a coincidence," Larson said. "It was the same language on the same subject and the same arguments."

The Democrats did publicize some aspects of this secret program while it was running, praising the initiative as their first step in bringing back "truth" to radio. However, the inner workings of the TRI were kept secret for decades.

The Washington Free Beacon reviewed years' worth of previous reporting and scores of internal documents from the Clinton Presidential Library—including secret DNC communiques, confidential state party documents, and executive memorandums for the president—that together shed light on the internal workings of TRI. The materials revealed that Democrats systematically trained more than 4,000 operatives in at least 23 states to lie about their identities, deflect difficult questions from hosts, and plant pro-Democrat messages on the radio waves.

"If you are afraid that producers are beginning to recognize your name and are weary of allowing you on the air, use an alias," the Michigan Democrats' TRI guide read. "For example, be Carol today, Sue tomorrow, and Debbie on Friday!"

The records also revealed that the Clinton administration consistently kept tabs on and coordinated with TRI, considering it a crucial pillar of the administration's plan to neutralize conservative radio in preparation for the 1996 election.

"My office is now coordinating closely with talk radio shops in the White House, Federal Departments and Agencies, the House, the Senate, and [the] ones I have helped set up in the State Parties," TRI Director Jon-Christopher Bua, an acting-coach-turned-DNC staffer, wrote in an April 1996 memo to the White House Deputy Chief of Staff Harold Ickes.

Ickes forwarded the memo to President Bill Clinton, Vice President Al Gore, Chief of Staff Leon Panetta, and several other White House insiders. It was one of several TRI memos seen by White House leadership. Ickes did not respond to request for comment about the initiative.

Democrats began conceptualizing a new radio strategy after their historic defeat in the 1994 election, when the GOP, buoyed by support from popular radio hosts, captured the House of Representatives for the first time in 40 years. Operatives launched the project as an "all encompassing, nationwide grass roots effort to win back the airwaves." The multi-pronged project sought to groom pro-Democrat radio hosts by "offering them good guests, information, and access" and train Democrats to appear on these shows. The initiative targeted not just large national or regional shows, but local radio shows serving listeners in battleground districts.

"Democrats have largely ignored talk radio, and only since the last election, have we paid attention to how we can win back the airwaves and the discussion," an internal DNC report on the project read. "We have now put our frustration into action." 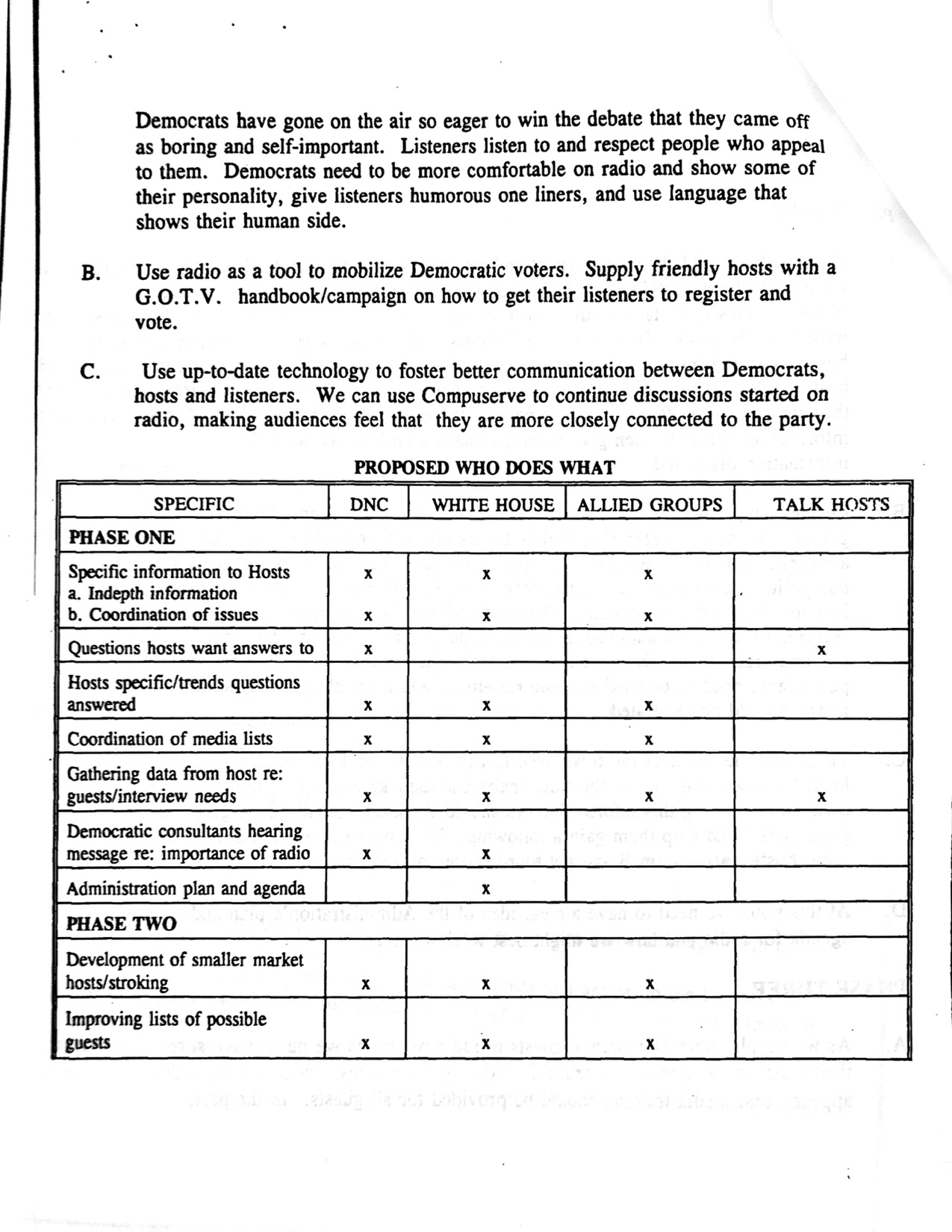 TRI was one aspect of this large-scale Democratic push to capture the airwaves. Led by Bua, a seasoned operative dubbed the "secret weapon of the DNC" at the 1996 convention, TRI organized three-hour media training boot camps for liberal activists across the United States.

"Sound dumb," a DNC-published TRI guide said. "Even though you may have indicated a difference of opinion with the host, appear to present an opportunity for him to demolish you with his 'superior' intelligence."

The guide also offered advice on how to deflect tough questions, emphasizing that "the key is that you can always just change the subject." It also said activists should "reach out to the women listeners who may not usually call in" because "you can appeal to women with children who are being hurt by the Republican budget cuts."

Larson, host of the syndicated Lars Larson Show, said he would get up to a dozen call-ins from seminar callers in one week.

"They seemed to come in waves," Larson told the Washington Free Beacon. "You would start getting seminar calls on Monday and Tuesday and you say 'we are going to start getting these all week long,' as though someone has just put out the word that this is a point that needs to be pushed."

While Democrats tried to keep TRI a secret, Larson said it was usually easy to spot seminar callers. "If you do it very cleverly, you can probably camouflage that you are a seminar caller," he said. "Most of the people were not clever enough."

There were usually some giveaways. Many pro-Clinton listeners dialed up his Portland station using Boston or New York area codes. Different callers would recite the same talking points back-to-back on a topic that Larson was not even discussing.

Bua, who did not respond to request for comment, told the Philadelphia Inquirer in 1996 that, while he estimated that roughly 50 to 70 percent of his students appeared on radio shows, the DNC does not collect data on TRI.

Internal documents showed that this was not true. The Michigan Democrats' TRI guide required activists to report the results of their call-ins to local radio shows to "assess the effectiveness of the initiative." Bua himself noted in an internal February 1996 memo to Ickes that TRI was a useful tool to "coordinate and monitor Talk Radio around the country," adding that Democrats made at least 9.5 million voter contacts through TRI.

Bua credited then-first lady Hillary Clinton with coming up with the initiative, while he was hosting a TRI seminar for feminists at the 1996 convention, according to a National Review dispatch. Clinton's approach to private actors manipulating public opinion through popular media has changed in the wake of the 2016 election. She has since claimed that "misinformation" by "domestic actors" on social media helped lead to her surprise loss to President Donald Trump.

"The big social media platforms know their systems are being manipulated by foreign and domestic actors to sow division, promote extremism and spread misinformation," Hillary said at a June commencement address.

The White House kept tabs on Bua and the TRI in at least three memorandums, on occasion applauding it as a significant pillar of the Democratic radio strategy.

In a memo to the president, Ickes wrote that TRI was "a small step, but seemingly worthwhile, and, judging by some of the letters I've received about Jon-Christopher's workshops and training sessions, gets very positive reviews."

After Clinton won re-election in 1996, his administration rewarded Bua with senior-level positions in three federal agencies. He served as communications director of the U.S. Small Business Association and the Office of Personnel Management before becoming a managing director at the Overseas Private Investment Corporation.

The appointments may also have been in appreciation for Bua's "valuable assistance … [in] helping to make the Administration's case with regards to Whitewater related matters," as Ickes revealed in his April 1996 memo to the president.

Nearly 25 years after the program's inception, it remains unclear just how impactful the TRI was in shaping the opinions of radio listeners. In the April 1996 memo to Ickes, Bua cited a Pew Research Center study that showed 8 percent more talk radio listeners supported the president one year after TRI started. However, it's not certain whether this uptick can be attributed to the TRI.

It's not known when TRI officially ended operations, but mentions of the program disappeared from documents and media reports following Bua's departure from the DNC after the 1996 election.

Larson suspects that TRI may have had some limited impact on listeners, especially those who may have been on the fence politically.

"A lot of my audience has strong political views but I'm also aware that a lot of people who have never called a show and listen occasionally," Larson said. "If they hear the right argument at the right time, in that way, I imagine it could shift some votes."