After being asked by the Free Beacon whether Heinrich would return the donation from Weinstein, which totaled $5,400 this year, Heinrich's campaign said it would not be keeping any support from the movie mogul.

"As soon as Senator Heinrich learned of these allegations, he donated the $5,400 contribution to Community Against Violence, a nonprofit organization in New Mexico," said Marsha Garcia, a spokesperson for Heinrich, who is up for reelection in 2018.

The Community Against Violence operates a 24-hour hotline for survivors of domestic and sexual violence and is based in Salazar Taos, N.M.

Sen. Richard Blumenthal (D., Conn.) also confirmed to the Free Beacon that he will not be keeping donations from Weinstein, which totaled $5,400 in 2016.

"Senator Blumenthal will be donating the full amount of Mr. Weinstein's contribution to the Connecticut Alliance to End Sexual Violence," said Maria McElwain, his communications director.

On Thursday, the New York Times reported on a series of sexual harassment allegations against Weinstein that span decades and resulted in at least eight settlements with female accusers. The allegations include unwanted sexual advances and assault.

Weinstein is a major supporter of Democratic candidates, including over $20,000 to two-time failed presidential candidate Hillary Clinton and bundling over $600,000 for former president Barack Obama's reelection campaign. 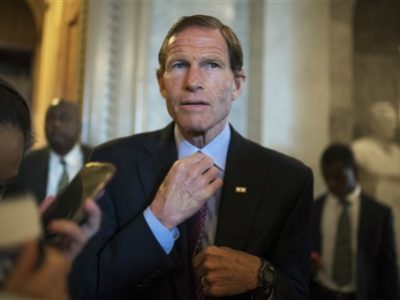