The nominee in question is Ronald Batory, who the Senate Commerce Committee unanimously approved to head the Federal Railroad Agency last August. Schumer and a small group of Democrats have used Senate procedure to block the nomination, leaving the agency—tasked with investigating incidents such as the one this week—without its top official.

Jeffrey Rosen, Department of Transportation's deputy secretary, told Schumer in a letter sent shortly after the Wednesday accident that the "agency needs to have its chief rail safety official in place."

"Today a train carrying members of Congress from both the Senate and the House of Representatives was involved in a tragic crash that resulted in multiple injuries and at least one fatality," wrote Rosen in the letter, provided to the Washington Free Beacon. "While the circumstances of that crash are being reviewed by the Federal Railroad administration, it is clear that the agency needs to have its chief rail safety official in place."

Rosen described Batory as "a highly qualified rail safety expert" and said Schumer should drop his hold "in the interest of public safety."

"Today's tragic accident is not the first one to occur during the lengthy delay since [Batory was approved by the Senate Commerce Committee]," Rosen wrote. "In the interest of public safety, I am asking that you set aside wholly unrelated issues and remove your hold on his nomination to become the Federal Railroad Administrator."

Schumer's office did not respond to a request for comment on the letter.

A spokesperson for DOT told the Washington Free Beacon that Schumer is "putting politics before safety" by blocking Batory.

Schumer has made clear that his block is unrelated to Batory's qualifications for the post, but rather part of an effort to push the administration to put $5.5 billion in federal grants toward a major tunnel project connecting New York and New Jersey. The administration has called the request unrealistic, but has said it will work with state officials on a more feasible plan.

The White House has stated plainly the "pointless obstruction" will have no impact on its funding decisions.

Batory is currently working at DOT but is unable to perform duties of the FRA administrator until he is confirmed.

"Batory is currently serving as the senior adviser for rail matters," a DOT spokesperson explained. "He is not able to perform the duties of the FRA administrator because his confirmation is being blocked by senators from New York and New Jersey who are putting politics before safety."

Batory's nomination was announced nearly seven months ago on July 11, a few months after he retired from a 46-year rail-operating career.

The editor of Railway Age said there hasn't been a FRA nominee "with as comprehensive a rail operating background as Batory" since 1969.

"Ron Batory's nomination as Federal Railroad Administrator is a creative move to bring fresh technical, business, operational and safety oversight to the FRA's important regulatory oversight position," said editor Jim Blaze. "If his nomination is approved, Ron Batory may well bring about a new aggressive yet balanced approach to the FRA role."

A spokesman for Sen. John Thune (R., S.D.), who chairs the Commerce Committee, said after the last fatal train incident that Schumer was "hampering efforts to enhance railroad passenger safety" by blocking Batory. 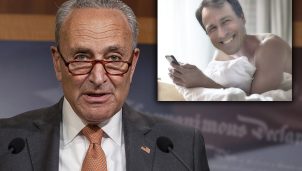 Chuck Schumer Wanted a Boring White Dude Locked in a Basement. Cal Cunningham Had Other Ideas.