Jarrar, a professor in Fresno State's Department of English, started sending out tweets celebrating Bush's death within an hour after media outlets reported she had passed away at the age of 92 years old.

"Barbara Bush was a generous and smart and amazing racist who, along with her husband, raised a war criminal. Fuck outta here with your nice words," Jarrar tweeted. 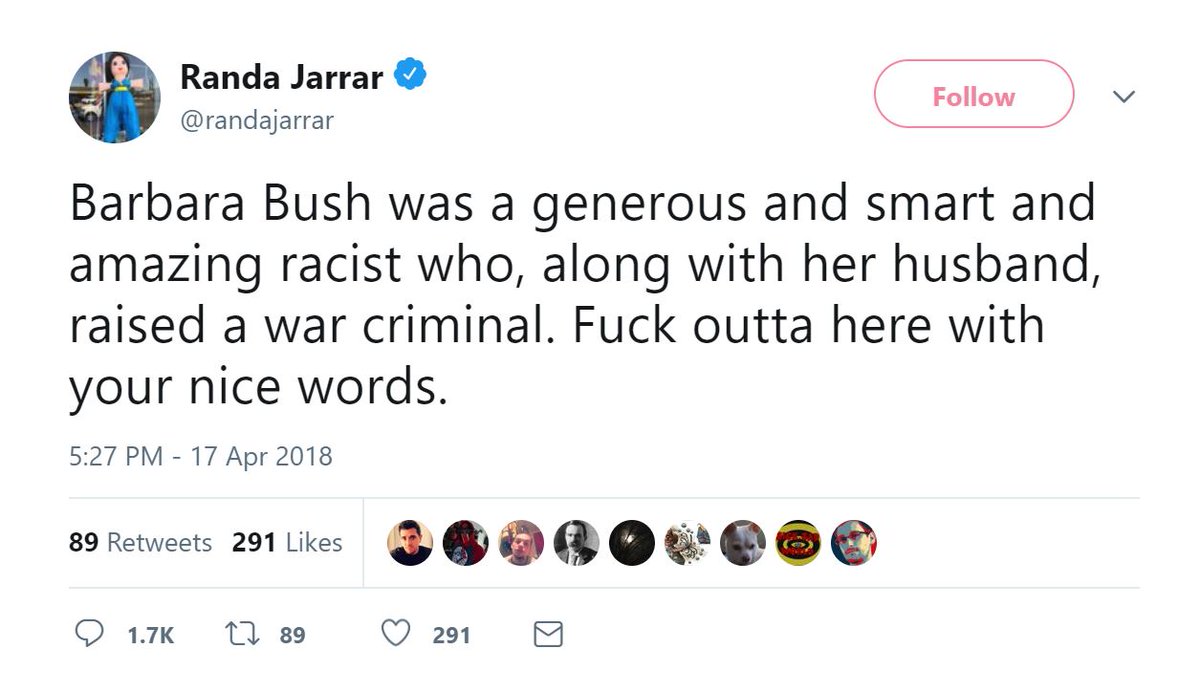 Her now-private tweet generated a lot of controversy with over 3,000 comments, many of which were critical of her comments and called for her to be fired. Several people tagged the Twitter handles of Fresno State's President Joseph Castro, prompting her to brag about being a "tenured professor" and about how she cannot be fired.

"sweetie i work as a tenured professor. I make 100K a year doing that. i will never be fired. i will always have people wanting to hear what i have to say. even you are one of them! <3," Jarrar tweeted. 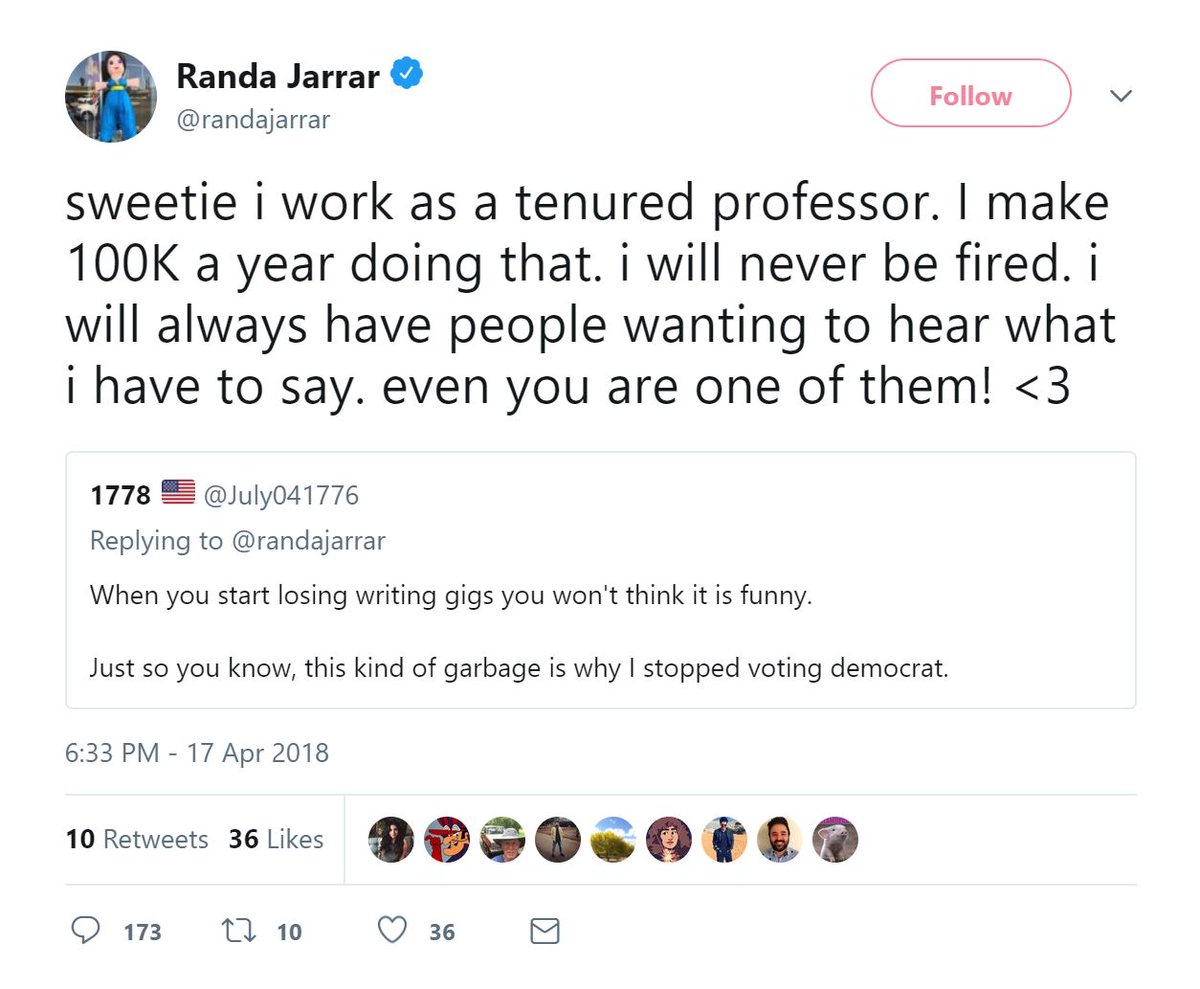 She replied to another user: "you can try all you want. i will not be fired. and i know how much that hurts you :)."

She went on to she is "happy" knowing former President George W. Bush is  "probably really sad right now." 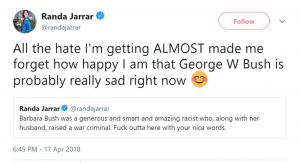 "Professor Randa Jarrar is an award-winning novelist, short story writer, essayist, and translator,"  Jarrar's bio on the university's website reads. "Her essays have appeared in The New York Times Magazine, The Utne Reader, Salon, Guernica, The Rumpus, The Sun, and others."

Jarrar continued her attack on Barbara and the Bush family, accusing them of exhibiting "genocidal ways."

"PSA: either you are against these pieces of shit and their genocidal ways or you're part of the problem. that's actually how simple this is. I'm happy the witch is dead. can't wait for the rest of her family to fall to their demise the way 1.5 million iraqis have. byyyeeeeeeee," continued Jarrar in an another tweet. 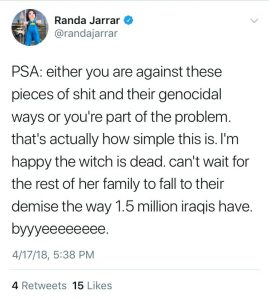 This isn't the first time Jarrar has responded without sympathy to a Republican fighting for his or her life. Last June, Jarrar tweeted, "I don't give a single fuck" in response to tweet from Politico reporter Rachael Bade about House Majority Whip Steve Scalise (R., La.) fighting for his life after he was shot in the hip.

Castro, the university's president, sent out a statement a few hours after Jarrar's tweets, which have since been made private and only viewable to only her followers, went viral. Castro distanced the university from her comments, saying the tweets were "made as a private citizen, not as a representative of Fresno State."

"Professor Jarrar's expressed personal views and commentary are obviously contrary to the core values of our University, which include respect and empathy for individuals with divergent points of view, and a sincere commitment to the mutual understanding and progress," the statement said.

According to her Twitter bio, Jarrar is now "on leave." It is unclear if it is related to her statement about Bush.

Bush, who had been battling chronic obstructive pulmonary disease and congestive heart problems in recent years, was the wife of the 41st president, George H.W. Bush, and mother of the 43rd, George W. Bush, according to Reuters.

The Bushes had six children. A daughter, Robin, died of leukemia in 1953 at age 3. Barbara Bush’s hair began to turn prematurely white after the shock of the girl’s death. In addition to George W. and Jeb, the other Bush children were sons Neil and Marvin and daughter Dorothy.

The Bushes married on Jan. 6, 1945, and Barbara set up households in numerous cities as her husband moved from being a Texas oilman to being a member of Congress, Republican Party leader, U.S. envoy to China and the United Nations and head of the CIA. 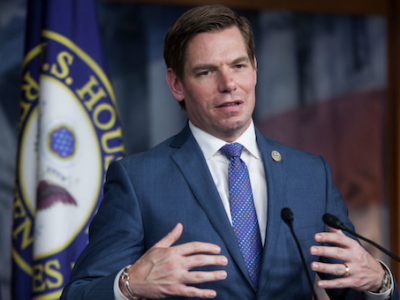