AARP's ad campaign attacking the House-passed American Health Care Act, which is embraced by Handel and opposed by Ossoff, was reported by Politico on Tuesday morning. The ad states that "the new health care bill in Congress will cost you more money for less coverage," and closes by saying, "You know, there's an election here in Georgia on June 20 … you can start summer off right by knowing where the candidates stand on this health care bill."

The ad launch came a day after the Atlanta Journal Constitution reported (in a post that appears to have since been deleted) that the debate "just got more interesting" because of the announcement that the AARP was sponsoring it.

"Tuesday's 8-9 p.m. debate on WSB-TV just got more interesting," the AJC wrote. "The AARP is a sponsor of online coverage by Channel 2 Action News, it was announced this morning. Which means health care and the Republican attempt to repeal the Affordable Care Act is likely to be a major focus."

Asked about whether the ad campaign impacted the decision to allow AARP to sponsor the debate, host WSB-TV said that "AARP has no involvement in any way in the debate."

AARP Georgia had just announced an hour earlier that it was sponsoring the debate on Twitter, linking to the AJC report. 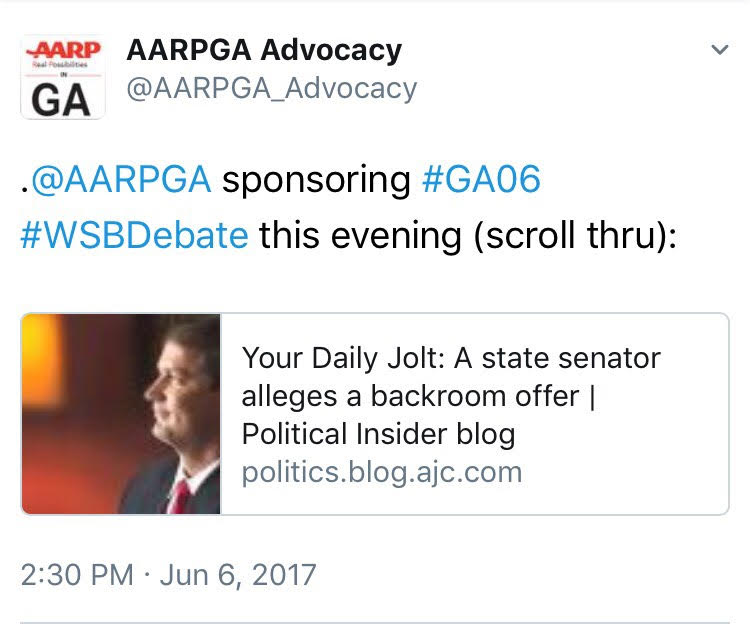 It also put out a press release highlighting its decision to sponsor the debate.

"With Congress considering legislation that could significantly affect healthcare access for its members, AARP Georgia will sponsor the livestream and post-debate digital coverage of the June 6th Congressional District debate between Karen Handel (R) and Jon Ossoff (D) on Channel 2 WSB-TV," said the release.

"The nation's eyes are on Georgia's 6th District, and voters deserve to know where the candidates stand on the healthcare issues underpinning Capitol Hill's current healthcare legislation, which would significantly change how our members ages 50 and over could access healthcare and what they would pay for it," said AARP Georgia director Debra Tyler-Horton. "AARP Georgia has 73,652 members in the 6th Congressional District, and we're sponsoring this important debate because we're committed to providing them with the information they need before they go to the ballot box."

Debate host WSB-TV denies that AARP is sponsoring the debate in any way—it says that AARP simply purchased an ad on the webpage where the debate will be live-streamed.

"The AARP has bought an ad on the digital platform, but they are in no way connected editorially to the debate," said a network official. "So the inference that because they're sponsoring the debate means that we're going to ask questions about any given topic is inaccurate."

"AARP bought around it because of what's being talked about, but their buying an ad in no way put them in partnership with our editorial work at all," the official said.

A programming official at the network said that it reached out to AARP to question why it put out the press release claiming sponsorship of the debate.

AARP has deleted the above tweet stating that it was sponsoring Tuesday night's debate.

The press release containing the quote from Tyler-Horton, however, still remains as it was originally published, and was emailed to the Washington Free Beacon by an AARP media relations official after the tweet was deleted.

AARP vice president John Hishta denied that the ad in Georgia's sixth district was intended to boost Ossoff, but says that "sponsorship of debates" is one way that it encourages an open dialogue.

"AARP remains proudly nonpartisan, and we do not endorse any candidate or political party," Hishta said in an email.

"We do believe voters want to know where the candidates stand on critical issues like health care," Hishta said. "As we have for years, we're encouraging an open dialogue that would help voters choose their candidates through things that include nonpartisan ads, sponsorship of debates and voter education."

A visit to the WSB-TV webpage where the debate is being aired shows that the live-stream is being sandwiched by AARP ads attacking the AHCA.

The hour-long debate will air on Tuesday night. WSB-TV's director of programming says that no commercials will run during the debate.