Between 50 and 60 people gathered to march through D.C.’s lobbying corridor, stopping to chant and hoist Fairey’s poster at offices that do business with the nation’s largest Second Amendment organization.

Fairey, the creator of the iconic Obama "Hope" poster and a reliable front of liberal pablum since, was not among the tens of protesters Thursday.

He did weigh in on his newest effort from afar, however.

"If God tells us to love our neighbor and not to take another human life, where do the assault weapons and piles of ammo fit into these ‘Christian values?'" Fairey has said of his new poster. "I personally think assault weapons fall more in the ‘Satan’s values' category."

The text is somewhat derivative of a series of Jewish novelty t-shirts that read, "Jesus saves, Moses invests."

The D.C. activists gathered at McPherson Square, the site of one of D.C.’s Occupy camps during the Occupy Wall Street protests that swept the country in 2011.

The purpose, organizers said, was to shame not only the NRA but also the lobbying shops that worked with them to stymie gun-control legislation. 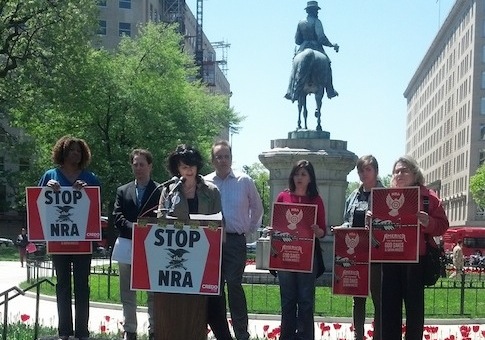 After the speeches, protesters marched to five lobby shops where they planned to deliver manila envelopes with pictures of a 16-year-old girl who had been gunned down in D.C. One picture showed the girl alive. The other was a gruesome shot of the girl, dead.

"Stop Working for the NRA" was Sharpied on the envelopes, which were delivered to one lobbying shop by the girl’s mother.

The organizers had originally planned to drive a hearse full of caskets to the firms back on April 16, a day before the contentious Senate vote on background checks. But the Boston bombings put the protest and the macabre imagery on hold.

Some brief confusion ensued Thursday when protesters arrived at the first nondescript office building and no one could remember which lobbying firm was located inside.

"Whatever, we’ll get it to them later," one organizer told another after milling about for a few minutes. "Let’s not stand around looking like idiots."

"The main problem with gun legislation and gun violence is the permissivity of ownership," John Schuster, a D.C. resident, told the Washington Free Beacon as the group trundled down K Street.

Schuster did not consider the Second Amendment an individual right, as the Supreme Court has ruled it to be.

The ideal solution to guns, Schuster said, would be to "repeal the Second Amendment and replace it with something the Supreme Court can’t misinterpret."

Although the general consensus was most certainly against the NRA, others were more in favor of the right to bear arms.

"I believe in the Second Amendment, and I believe that’s one of the amendments we need to assert in a responsible manner," Robledo said. "The problem is there’s too many people who own guns and don’t know how to use them. This goes from your regular civilian to police."