Kaine, now a U.S. senator, sent a letter to an official at the U.S. Customs and Immigration Service (USCIS) in December 2009 detailing Virginia policies that would benefit Gulf Coast Funds Management (GCFM), a major investor in GreenTech Automotive.

GCFM works to secure investors for U.S. companies through USCIS’s EB-5 program, which offers visas to foreign investors who pledge a certain level of financing for American businesses.

The firm is run by Anthony Rodham, the brother of former Sen. and Secretary of State Hillary Clinton.

Kaine was attempting to classify certain areas of Virginia as "targeted employment areas," which reduces the threshold for EB-5 capital needed to grant visas to investors.

"This letter is to identify the agency in Virginia which has been named to determine and designate areas of high unemployment as targeted employment areas with respect to the application of Gulf Coast Funds Management, LLC for approval of expansion in the Commonwealth of Virginia," Kaine wrote.

Kaine’s letter came three days after officials from the Virginia Employment Commission sent a letter to the same USCIS official detailing areas in the state that it had classified as targeted employment areas.

The EB-5 investment threshold is reduced from $1 million to $500,000 for companies that operate in those areas. That reduced threshold can attract more investors seeking U.S. visas.

The EB-5 program has come under fire from critics who say it is prone to fraud and, even when it operates as designed, amounts to a "cash-for-visa" scheme.

"We have great doubts that [GreenTech] is a legitimate project, but because of the players involved, [we] are being responsive," Paul Grossman, the director of international trade and investment at the Virginia Economic Development Partnership, wrote in September 2009.

GreenTech would eventually forego plans for a Virginia manufacturing facility in favor of one in Mississippi, where Republican Gov. Haley Barbour, a close friend of McAuliffe, helped the company secure millions in state incentives.

The month before Kaine sent his letter to USCIS, another VEDP official noted that GreenTech had "asked Governor Kaine to write a letter to Secretary Napolitano" in an attempt to help secure EB-5 financing for the company.

Kaine’s office did not respond to requests for comment.

His work on behalf of GCFM could fuel perceptions that GreenTech’s business strategy depended in large measure on the political support that McAuliffe brought to the table.

The Virginia governor’s race between McAuliffe and Republican Ken Cuccinelli "might be the clearest contrast we’ve seen of a corporatist Democrat running against a free-market populist," Tim Carney, director of the Culture of Competition Project at the American Enterprise Institute, previously told the Washington Free Beacon. 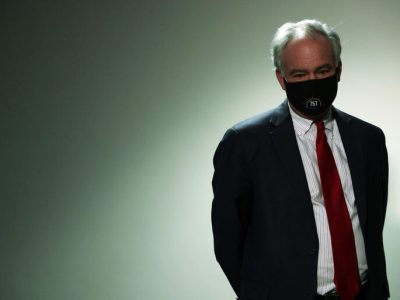