OMAHA—China last month conducted another test of a satellite-killing missile that reflects Chinese efforts to weaponize space, the commander of the U.S. Strategic Command said Wednesday.

"It’s very problematic to see China working to weaponize space in tests like this one they just had, and so [it’s] very concerning to me as the U.S. Strategic Command commander, and to our nation at large, given our dependency on that capability," said Adm. Cecil D. Haney, Strategic Command chief.

Haney, speaking to reporters after remarks to a Stratcom-sponsored conference on nuclear deterrence, also voiced worries about the recent increase in Russian strategic nuclear bomber incursions into U.S. air defense identification zones near Alaska and close to U.S. territory.

"I will say that the business of them coming close to the United States of America, we take very seriously," said the four-star admiral who is in charge of U.S. nuclear warfighting forces.

The blunt comments about Chinese weaponization of space are unusual and followed the July 23 test of what U.S. officials said was China’s low-earth orbit DN-1 anti-satellite interceptor. It was the latest ASAT test by China that both Pentagon and State Department spokesmen described as a "non-destructive" prototype.

China, for its part, did not identify the July 23 test as an ASAT weapon. Instead, China said it involved a missile defense system. The Chinese Defense Ministry dubbed the test "a land-based anti-missile technology experiment." 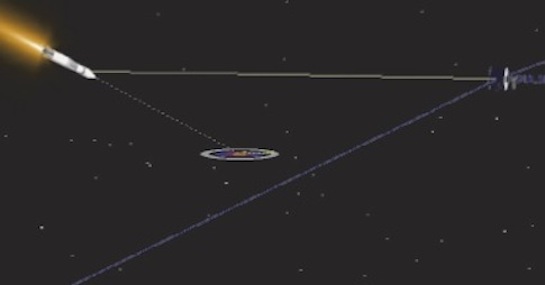 Frank Rose, deputy assistant secretary of state for verification and compliance, said during the conference that the recent Chinese ASAT missile was "designed to destroy satellites in low-earth orbit."

"Despite China’s claims that this was not an ASAT test, let me assure you the United States has high confidence in its assessment that the event was indeed an ASAT test," he said.

Rose said the development and testing of destructive anti-satellite weapons "are both destabilizing and threaten the long term security and sustainability of the space environment."

The latest ASAT test followed the highly destructive January 2007 test missile attack against a Chinese weather satellite, and a May 2013 test of a more capable high-earth orbit satellite killing interceptor, known as the DN-2.

Stratcom currently operates a space center that "spends a lot of time working to try to follow all of the things that are up in space, including space debris, so that we can make aware, not just the military, [but] commercial entities, other nations, of any potential for that stuff running into each other, and having collisions, creating more debris as well as taking out capability," he said.

Army Lt. Col. Valerie Henderson, a Pentagon spokeswoman, said in an email that "the United States has concluded that the People's Republic of China conducted a non-destructive test of a missile designed to destroy satellites on 23 July." She declined to elaborate.

State Department spokeswoman Marie Harf said July 25 that the January 2007 ASAT test "created thousands of pieces of debris, which continue to present an on-going danger to the space systems of all nations, including China."

"We call on China to refrain from destabilizing actions—such as the continued development and testing of destructive anti-satellite systems—that threaten the long term security and sustainability of the outer space environment, on which all nations depend," Harf said. "The United States continuously looks to ensure its space systems are safe and resilient against emerging space threats."

China’s ASAT weapons remain shrouded in secrecy. A Chinese defense research paper published in 2012 states that "kinetic energy antisatellite refers to the mode of attack in which a non-explosive high-speed warhead directly hits a satellite with great energy, to damage the functions of the satellite or incapacitate it."

"China has two ground-based ASAT systems, the DN-1 and DN-2, advanced ground based laser ASAT systems and is developing dual-use co-orbital satellites that can monitor or attack U.S. satellites," said Fisher, an analyst with the International Assessment and Strategy Center.

"Washington cannot wait for China to agree to any future verifiable space weapon control agreement and the likelihood is very high that any diplomatic exercise will be used to buy time for China's space weapon development," Fisher said. "As China develops space weapons we can also be assured that Russia will soon enter this competition."

"In the near-term, the U.S. requires jet fighter launched ASATs as they provide great tactical flexibility," he said. "In addition, the X-37B experimental small space plane should be developed into a combat/military surveillance capable platform."

The Washington Free Beacon first disclosed in October 2012 that China was developing a DN-2 ASAT interceptor for use against satellites in geosynchronous orbit, around 22,000 miles high.

Fisher also said: "By the early 2020s China will have high-orbit ASATs targeting U.S. early warning satellites and a significantly larger nuclear missile force defended by active missile defenses. If the U.S. continues to reduce its nuclear warhead numbers, as is being sought by the Obama administration, Americans could be facing a period of great strategic nuclear vulnerability."

Mark Stokes, a former Pentagon specialist on the Chinese military, said the most recent ASAT test was designed to "demonstrate potential intent to deny freedom of space flight" over Chinese territory.

A key question is whether the July 23 test was conducted by China’s state-run aerospace industry or its Second Artillery Corps, the People’s Liberation Army unit in charge of strategic missile and nuclear forces.

The designation "DN" for the ASAT weapons may refer to "dongneng," the Chinese term for kinetic.

"There have been authoritative references to a dongneng (kinetic) ASAT program, which began in 2006," he said.

"The HQ-19 could use a single stage and the HQ-26, if this is the true designation, could use two stages that would give it a higher reach," Stokes said.

"There have been authoritative references to a new solid motor under development since early last year that could be relevant."

A kinetic kill vehicle for disabling satellites may employ infrared imaging and other advanced guidance technologies, he said.

Asked if the bombers were testing defenses, Haney said: "Well, I would say over our history, this isn’t the first time Russia has done this sort of thing."

"But I will not try to say what’s in the leadership of Russia, Putin’s mind, in terms of why he picked the time and place that he did to do the number of excursions that he did here a week ago," he said.