The State Department on Thursday was caught deleting a tweet that had referred to the recent spate of terror attacks against Israel as "tragic" and "outrageous."

The tweet was then replaced with a more subdued statement referring to the attacks on Jewish people as "recent."

Secretary of State John Kerry "addresses the tragic, outrageous attacks on civilians in Israel and West Bank," the State Department tweeted from its official account." 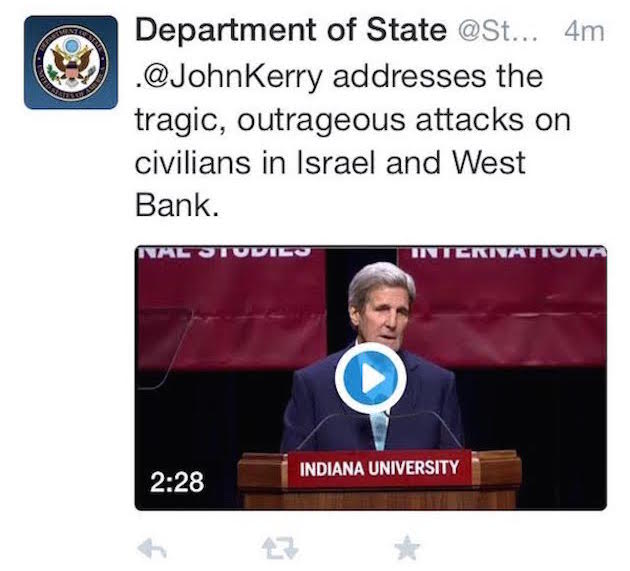 That tweet was quickly deleted and replaced with a new tweet omitting references to the attacks as "tragic" and "outrageous."

The first tweet says Kerry addressed the "tragic, outrageous" attacks on Israel. It was promptly deleted and replaced. The second tweet just calls the attacks "recent."

"Secretary @JohnKerry addresses the recent attacks on civilians in Israel and the West Bank," the new tweet reads.

Secretary @JohnKerry addresses the recent attacks on civilians in Israel and the West Bank. http://t.co/dElQ82tbVN

Meanwhile, the Obama administration came under criticism on Wednesday for accusing Israel of "terrorism" amid a sharp uptick in terror attacks committed by Palestinians against Jews.

At least three Israelis have been killed as a result of the violence and many more injured. Palestinian leaders have encouraged their people to continue attacking Jews and committing terrorism.

"Individuals on both sides of this divide are—have proven capable of, and in our view, are guilty of acts of terrorism," State Department Spokesman John Kirby told reporters following questions about the spike in violence.

"We’re always concerned about credible reports of excessive use of force against civilians, and we routinely raise our concerns about that," Kirby added.

Secretary of State John Kerry has blamed the rise in violence of the supposed growth of Israeli "settlements," or Jewish homes constructed in Jewish areas of Israel.