A press briefing became testy Thursday when State Department spokeswoman Heather Nauert accused reporters of being "obsessed" with Russian interference in the 2016 election and urged them to "look at Russia and what it's doing in killing people in Syria."

The exchange was prefaced by Nauert's discussion of Russia's role in Syria where she said Russia was, in part, responsible for violence occurring in the war-torn country.

President Donald Trump criticized Russia last week for its role in the Syrian civil war, calling it a "humanitarian disgrace." A prominent U.S. general further ripped Russia's failure to end the ongoing conflict. Army Gen. Joseph Votel told the House Armed Services Committee that, "I'm being very serious when I say they play the role of both arsonist and fireman—fueling tensions and then trying to resolve them in their favor."

Nauert was discussing the international community's attempts to holding Russia accountable for its actions in support of the Bashar al-Assad regime when she called out the reporters in the room.

"Let me again urge you, I know a lot of you are so obsessed with Russia and what Russia did in the United States in the 2016 elections," Nauert said.

"I would urge you to show your outrage…" she started before Associated Press reporter Matt Lee interjected.

"I don't think that's true in this room. Maybe in some other briefing rooms around town. Not this one," Lee said.

"OK, maybe in other briefing rooms," Nauert said. "But let me ask reporters to turn that around. It's fine to ask about Russia's role in influencing or trying to influence the 2016 election, but look at Russian and what its doing in killing people in Syria."

"I don't think I said everybody in this room is obsessed, but in general," Nauert responded.

"It's not germane to the question at hand," Labott shot back before going on to ask a question about the possibility of U.S. sanctions on Russia. 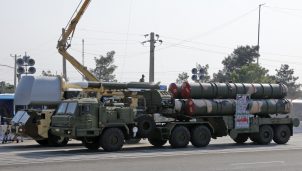