The Pentagon has not conducted airstrikes against an estimated 60 Islamic State (IS) training camps that are supplying thousands of fighters each month to the terror group, according to defense and intelligence officials.

The camps are spread throughout Islamic State-controlled areas of Iraq and Syria and are off limits in the U.S.-led international bombing campaign because of concerns about collateral damage, said officials familiar with planning and execution of the yearlong bombing campaign.

Additionally, the IS (also known as ISIS or ISIL) camps have been so successful that Islamic State leaders are considering expanding the camps to Libya and Yemen. Both states have become largely ungoverned areas in recent years.

The failure to target the training camps with U.S. and allied airstrikes is raising questions among some defense and intelligence officials about the commitment of President Obama and his senior aides to the current anti-IS strategy of degrading and ultimately destroying the terror group.

"If we know the location of these camps, and the president wants to destroy ISIS, why are the camps still functioning?" one official critical of the policy asked.

The camps are regarded by U.S. intelligence analysts as a key element in the terror group’s successes in holding and taking new territory. The main benefit of the training camps is that they are providing a continuous supply of new fighters. 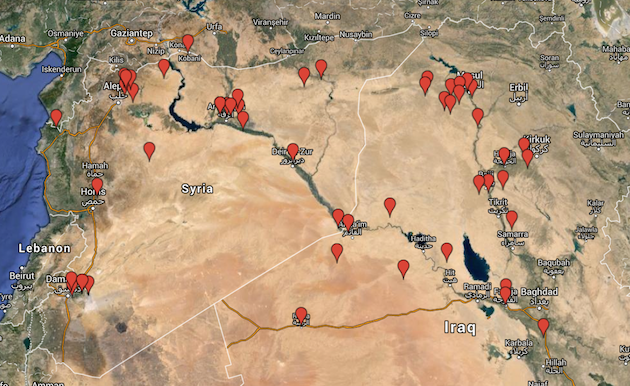 An additional worry of intelligence analysts is that some of the foreign fighters being trained in the camps will eventually return to their home countries in Europe and North America to carry out terror attacks.

A White House spokesman declined to comment on the failure to bomb the terror camps and referred questions to the Pentagon.

Pentagon spokesman Maj. Roger M. Cabiness declined to say why no training camps have been bombed. "I am not going to be able to go into detail about our targeting process," he said.

Cabiness said the U.S.-led coalition has "hit ISIL [an alternative abbreviation for the Islamic State] with more than 6,000 airstrikes."

"The coalition has also taken out thousands of fighting positions, tanks, vehicles, bomb factories, and training camps," he said. "We have also stuck their leadership, including most recently on Aug. 18 when a U.S. military airstrike removed Fadhil Ahmad al-Hayali, also known as Hajji Mutazz, the second in command of the terrorist group, from the battlefield."

Efforts also are being taken to disrupt IS finances and "make it more difficult for the group to attract new foreign fighters," Cabiness said in an email.

Air Force Col. Patrick Ryder, a spokesman for U.S. Central Command, said the coalition has conducted 19 airstrikes against training areas, the most recent on Aug. 5. The Central Command’s news release for that day, however, makes no reference to a training camp being struck in airstrikes. A July 30 release states that training areas were hit.

According to the Command’s website, a total of 6,419 airstrikes have been carried out over the past year, 3,991 in Iraq, and 2,428 Syria, indicating .3 percent of the airstrikes were carried out against training areas.

"Whenever we identify ISIL moving, staging, operating or training in any number, target them and strike them," Ryder said. "As a result, ISIL is not longer able to move freely or train openly for fear of being hit."

As a result of the air campaign, ISIL has begun "hiding amongst civilian populations and employing terrorist weapons from entrenched, defensive hiding places," Ryder said, adding, "regardless, the coalition can and will continue to identify, pursue and strike them relentlessly."

According to the defense and intelligence officials, one reason the training camps have been off limits is that political leaders in the White House and Pentagon fear hitting them will cause collateral damage. Some of the camps are located near civilian facilities and there are concerns that casualties will inspire more jihadists to join the group.

However, military officials have argued that unless the training camps are knocked out, IS will continue to gain ground and recruit and train more fighters for its operations.

Disclosure that the IS training camps are effectively off limits to the bombing campaign comes as intelligence officials in the Defense Intelligence Agency (DIA) and U.S. Central Command, which is in charge of the conflict, have alleged that senior U.S. officials skewed intelligence reports indicating the U.S. strategy against IS is not working or has been less effective than officials have claimed in public.

The Islamic State controls large parts of Syria and Iraq and has attracted tens of thousands of jihadists in both countries and from abroad. The exact number of fighters is not known but intelligence estimates have indicated the numbers have increased over the past year.

The military campaign, known as Operation Inherent Resolve, appears to be floundering despite a yearlong campaign of airstrikes and military training programs aimed to bolstering Iraqi military forces.

A review of Central Command reports on airstrikes since last year reveals that few attacks were carried out against training camps.

The risk-averse nature of the airstrike campaign was highlighted last month by Brig. Gen. Thomas Weidley, chief of staff for what the military calls Combined Joint Task Force-Operation Inherent Resolve.

Daesh is another name for the Islamic State.

Other coalition spokesman have indicated that targeting has been limited to reaction strikes against operational groups of IS fighters. "When Daesh terrorists expose themselves and their equipment, we will strike them," Col. Wayne Marotto said May 27.

The military website Long War Journal published a map showing 52 IS training camps and noted that some may no longer be operating because of the U.S.-led bombing campaign.

"While the vast majority of trainees have been used to fight in local insurgencies, which should be viewed as a threat. Historically jihadist groups have selected a small number of fighters going through their camps to conduct attacks against the West. The Islamic State is most certainly following this model," he said.

According the map, among the locations in Iraq and Syria where IS is operating training camps are Mosul, Raqqah, Nenewa, Kobane, Aleppo, Fallujah, and Baiji.

The group MEMRI obtained a video of an IS training camp in Nenewa Province, Iraq, dated Oct. 1, 2014.

The video shows a desert outpost with tan tents and around 100 fighters who take part in hand-to-hand combat exercises, weapons training, and religious indoctrination.

Aymenn Jawad Al-Tamimi, an analyst with the Middle East Forum, in June translated details of IS training purportedly obtained from a manual produced by a pro-IS operative in Mosul named Omar Fawaz.

Among those involved in ideological training for IS jihadists in Iraq is Bahraini cleric Turki Binali, who wrote an unofficial biography of IS leader Abu Bakr al-Baghdadi, Al-Tamimi stated in a blog post June 24.

According to a document thought to be written by Fawaz, training differs for native Iraqis and Syrians as opposed to foreign fighters, who generally are less experienced militarily than the regional trainees.

The document also reveals IS plans to export military manpower abroad, including Libya.

"Sessions for the muhajireen [foreign fighters] brothers last 90 days or more, and at the highest level deal with organization, determination, and intelligence operation, including training on heavy weaponry in addition to comprehensive Sharia sessions and multiple tests," according to a translation of the document. "Sessions for the Ansar from the people of Iraq and al-Sham range between 30 to 50 days."

The process begins with an application form and questionnaire regarding education, skills, viewpoints, and whether their backgrounds can be verified.

After a week of training, jihadists with special abilities are selected and placed in units. The units include special forces, air defense, sniper units, a "caliphate army," an "army of adversity," and administrative units for those capable of using electronic devices and accounting.

"The rest are distributed in fronts and camps after the end of the military camp training according to where they are needed," the report said, noting that all graduates are tested in Sharia at the conclusion of their training.

The New York Times reported Tuesday that the Pentagon inspector general is investigating allegations that military officials doctored intelligence reports in an attempt to present more optimistic accounts of the U.S. military’s efforts in the conflict.

The probe was triggered by a DIA analyst who stated that Central Command officials were improperly rewriting intelligence assessments prepared for policy makers, including President Obama.

The Daily Beast reported Wednesday that senior military and intelligence officials inappropriately pressured U.S. terrorism analysts to alter estimates of the strength of the Islamic State to portray the group as weaker.

Update 29 August, 12:00 P.M: This post has been updated with comment from Bill Roggio of the Long War Journal.

Update 30 August, 6:40 P.M: This post has been updated with additional comment from a spokesman for U.S. Central Command.