While Maddow is correct that the deficit is not increasing, she leaves out a vast amount of context within her critique. Here is the Cantor quote:

ERIC CANTOR: What we're trying to do is fund the government and make sure also that we take away the kinds of things that are standing in the way of a growing economy of better healthcare and all the while keeping our eye focused on trying to deal with the ultimate problem which is this growing deficit.

RACHEL MADDOW: Our ultimate problem, which is this growing deficit. The deficit is growing. Do we have a growing deficit? Is that true or false? False. Republicans love the idea that our Democratic president is so spend happy that he's driving up our nation's budget deficit. There's a difference between what our government takes in and what it spends is getting worse, the deficit is getting bigger that is not at all true. Look, the first bar here is 2009, that's President Obama's first year in office that's what he had on his hands when he came into office, what he got handed by the outgoing Republican administration, then the next three bars are 2010, 2011, 2012 and the final bar, the teeny tiny one, little shorty there, you might miss it on the right, that's the projected deficit for the end of this year. Notice that the bars are getting shorter? Which means the deficit is getting smaller. You see when things were once long become less long, they are not growing. It's amazing, right? Eric Cantor, you are incorrect.

A cursory reading of Cantor’s statement clearly shows he was referring to the increasing national debt, not the deficit (terms that are commonly confused). The debt is on the verge of topping $17 trillion.

First, the floor of Maddow’s graph illustrating the "decreasing deficit" is set not at 0, but at $500 billion. This exaggerates the perceived drop in the deficit by depicting the $759 billion deficit for 2013 (as Maddow puts it) as a "teeny tiny" little bar on the right. 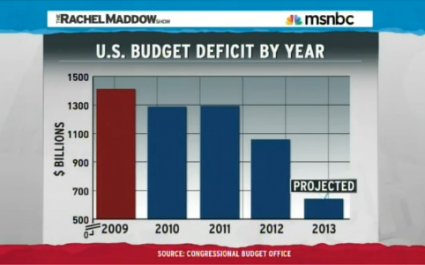 Not only is the graph misleading, the time frame of 2009-2013 gives a false impression of our debt and deficit outlook if entitlement spending is not addressed.

Here is what our deficit situation will look like over the next 70 years with no changes to entitlements (deficit represented as a percentage of GDP): 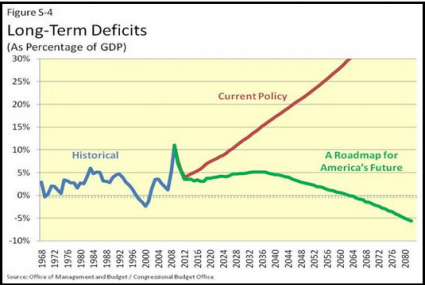 Maddow may be right on the most superficial point of distinguishing Cantor's use of "deficit" versus "debt," but she also completely distorts Cantor's meaning, thereby concealing our forthcoming debt crisis.