The omission of Parchin in the formal statements released by negotiators after the deal was reached is raising questions about whether Iran will agree to disclose all details of its work on building nuclear arms.

"Parchin has been the center of Iran's weaponization efforts for decades," said John Bolton, former U.S. ambassador to the United Nations.

"There is simply no provision for adequate international inspections of Parchin or any other weaponization-related activities, including Iran's ballistic-missile programs," Bolton added. "We have only our own intelligence capabilities, which Iran and North Korea have repeatedly evaded."

Satellite imagery revealed vehicles, equipment and construction materials at the site, the report said, noting that Iran has refused agency requests for access to the site since 2012.

Much of the complex was destroyed by the Iranians after Tehran was questioned about it in 2012.

Unlike two other nuclear facilities at Fordow and Natanz that are extensively covered by the framework nuclear accord, nothing in the framework specifically calls for access to Iran’s military facility at Parchin.

The Parchin military complex has been closely watched by U.S. intelligence for more than 15 years. It is known to be run by the Defense Industries Organization of Iran, Tehran’s main military manufacturer. It includes hundreds of buildings and test sites used for development of weapons, including rockets and fuel, and high explosives, including plastic explosives.

The White House fact sheet outlining the framework for what is being called the Joint Comprehensive Plan of Action specifies that Iran will provide access to all nuclear facilities. But the only two sites mentioned are Fordow and Natanz, both of which have been under video surveillance by the IAEA. The two centrifuge plants were built in violation of Iran’s commitment to the Non-Proliferation Treaty.

For places such as Parchin, the fact sheet states that Iran will implement "an agreed set of measures" to provide a full accounting of its "possible" nuclear arms work.

State Department spokeswoman Marie Harf did not say why Parchin was left out of the White House fact sheet, and an Iranian variant of the fact sheet on the Iran deal. In an email, she also did not say for certain Parchin will be inspected, only that it is expected to be part of any final agreement.

Parchin is part of what the negotiators call the "possible military dimensions" of the Iran nuclear program.

"We are still negotiating over all of the people and places where the IAEA will have access required when it comes to possible military dimensions," Harf said at the State Department Friday.

Asked whether Parchin would be inspected as part of the agreement, Harf said: "Well, we would find it, I think, very difficult to imagine a JCPA that did not require such access at Parchin."

Simon Henderson, a nuclear specialist at the Washington Institute for Near East Policy, said Parchin is included the framework "only by implication." Iran may try to block access by claiming that the work done there was did not involve nuclear materials, he said.

"Strictly speaking Parchin may not be a nuclear site in the sense that Iran has not declared it to the IAEA as such," Henderson said.

As a result, Parchin could be excluded from the framework’s provision requiring that the IAEA be granted access to all nuclear sites.

The conventional high-explosive tests suspected of taking place do not require nuclear material because ordinary uranium could be used for assessing the quality of an implosion designed to create a nuclear blast with enriched uranium in an actual nuclear bomb.

"To get to Parchin, the parameters [of a final agreement] need to include ‘anytime, anyplace’ inspections," Henderson said. "At the moment it doesn’t look as though we are going to get those."

Parchin became the focus of western efforts to expose Iran’s nuclear arms program in a November 2011 IAEA report. The report said Parchin was being used for explosive experiments that are "strong indicators of possible weapon development," the IAEA said.

The report disclosed that Iran had conducted work on "modeling of spherical geometries, consisting of components of the core of a [high enriched uranium] nuclear device subjected to shock compression, for their neutronic behavior at high density, and a determination of the subsequent nuclear explosive yield."

Additionally, the vessel was separated from a control building by an earthen barrier "indicating the probable use of high-explosives in the chamber," the report said, noting the vessel could contain a detonation of up to 70 kilograms of high explosives.

Iran allowed inspectors to visit the area around the vessel in 2005 but not the building housing the container.

A 2012 IAEA report repeated the earlier 2011 assessment that Iran constructed a large explosives containment vessel for "hydrodynamic experiments"—conventional explosives tests used to create pressure on fissile material in setting off a nuclear blast. 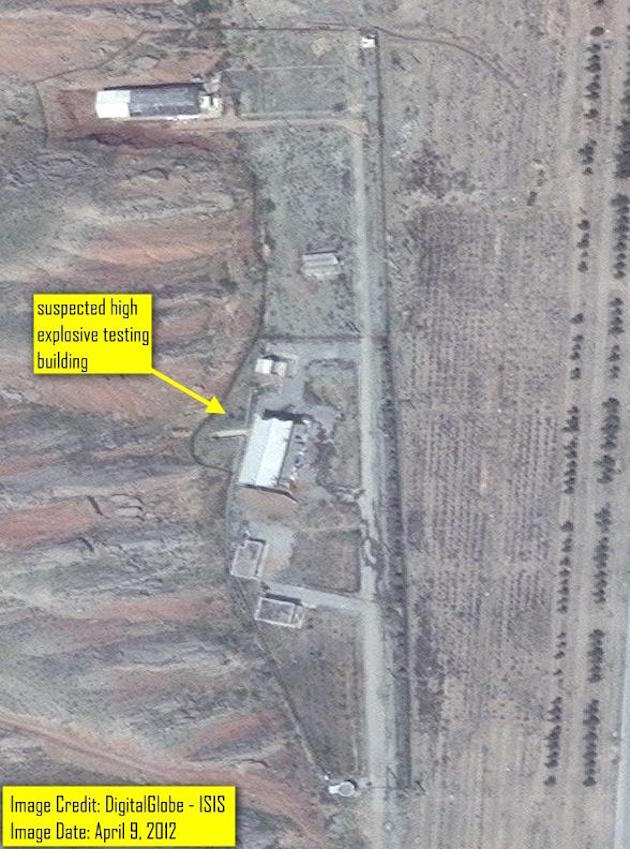 The building around the large cylinder vessel was built in 2000 but U.S. intelligence only learned of it in March 2011.

Satellite imagery of the site revealed little activity between 2005 and January 2012—when Iran was notified the IAEA wanted access to the plant.

Shortly after the notification, Iran began dismantling it. Activities seen included run-off of fluid from the vessel, equipment moved outside the plant, removal of fixtures from the building and vehicle activity.

The Iranians then destroyed five buildings near the main facility, and the removal of power lines, fences, and paved roads.

IAEA Director Yukiya Amano said in June 2013 that Iran appears to have removed nuclear bomb-making equipment and materials from Parchin. He noted the "massive" removal of soil, paving, and possible removal of infrastructure.

"As our verification capacity has been negatively impacted because of the extensive activities by Iran [at Parchin], it may no longer be possible to find anything even if we have access," Amano told reporters in Vienna at the time.

A State Department cable from 2008 disclosed by Wikileaks revealed that China supplied Parchin Chemical Industries with an industrial machine in violation of U.N. sanctions.

"Given Iran's refusal to address international concerns about its nuclear programs and its record as a serial proliferator that supports international terrorism, the United States views with serious concern any export of items with potential WMD applications to end-users designated under UN Security Council Resolutions," the cable stated in opposing the Chinese arms proliferation sale.