Republican leaders on the House Homeland Security Committee are opposing new proposals that would allow the federal government to shoot down rogue unmanned drones that fly near American airports.

Reps. Mike Rogers (R., Ala.) and Sam Graves (R., Mo.) petitioned the Department of Homeland Security on Thursday to urge Trump administration officials to reconsider a plan to grant the Federal Air Marshal Service the power to shoot unmanned drones that enter the airspace near the nation's airports.

"The National Airspace System hosts over 44,000 flights carrying 2.7 million passengers each day, with many of our airports in or near densely populated communities," the lawmakers said in a joint statement. "The only federal agency that fully understands the incredible complexity of this system, in its totality, is the Federal Aviation Administration."

"Nobody wants drones to cause disruptions at our airports, but to hastily hand over authority to shoot down drones to an agency that doesn't have the critical knowledge or experience of how our airspace system functions is irresponsible and dangerous," the lawmakers said.

The lawmakers said that the DHS drone proposal goes too far in the power it would grant to federal authorities. While they support the ability of DHS to shoot down unmanned drones that fly into sensitive and highly secured government areas, they object to proposals that would extend this authority to areas around the nation's airports.

"While we share the goal of ensuring that our nation's airports are not disrupted by negligent or nefarious [drone] operations, DHS does not have the authority or the experience necessary to operate [counter-drone] equipment in the manner proposed," the letter states. "If the administration believes that another federal agency needs additional authority to mitigate credible … threats near airports, we welcome any discussion along those lines in order to keep our national airspace systems safe and our homeland secure." 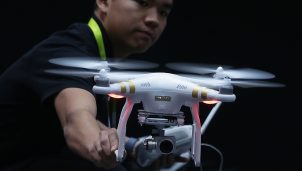