China rejected an appeal from the Obama administration earlier this month to halt "destabilizing" construction on disputed islets in the South China Sea, according to U.S. officials.

Assistant Secretary of State Daniel Russel urged Chinese officials to halt rapidly expanding island construction over the past several years in the disputed Spratly Islands during a visit to Beijing.

According to officials familiar with the talks, Russel’s appeal was rejected during a meeting Feb. 10 with Zheng Zeguang, China’s assistant foreign minister, who said the construction was occurring within China’s area of sovereignty.

Zheng’s rejection of the request by Russel, the administration’s key Asia Pacific policymaker, echoed remarks by Chinese Defense Ministry spokesman Sr. Col. Yang Yujun, who told reporters Jan. 29: "The construction and infrastructure maintenance on the reefs and islands in the South China Sea are legitimate and conducted in accordance with law. Other countries have no right to point fingers at such construction activities."

China is claiming more than 90 percent of the South China Sea as its territory and has been clashing with other claimants to the islets, including Philippines and Vietnam.

Russel could not be reached for comment. But he told the Wall Street Journal that the United States wants China to halt the island construction.

"It is destabilizing and is at odds with the commitments the Chinese made" to the Association of Southeast Asian Nations (ASEAN), Russel said.

China agreed to a recent ASEAN accord not to take provocative actions in the sea.

Russel said the large-scale sea reclamation work over the past two to three years "dwarfs anything and everything other claimants have done by many times over."

Chinese Foreign Ministry spokeswoman Hua Chunying also told reporters in Beijing Feb. 19 that "third countries should say less and stop stirring up trouble." She was responding to comments by Russel in Manila expressing concerns about Chinese activities in the region.

Satellite images of the construction reveal a dramatic increase in the activities, including new photos showing an artificial island 15.5 acres in size.

The island has two piers, a cement factory and a helicopter landing pad on Hughes Reef—located about 210 miles from Philippines. 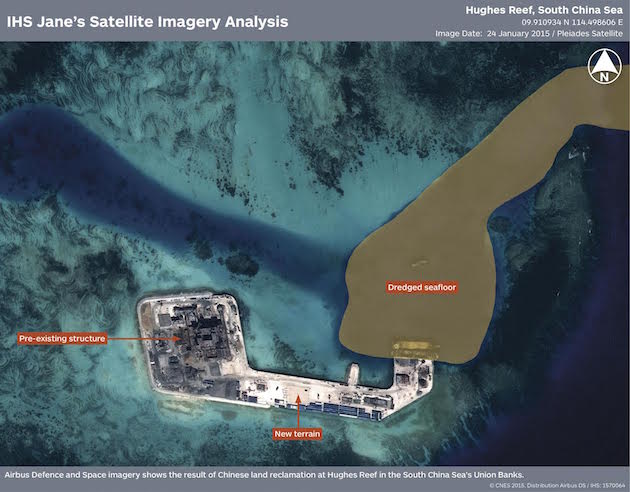 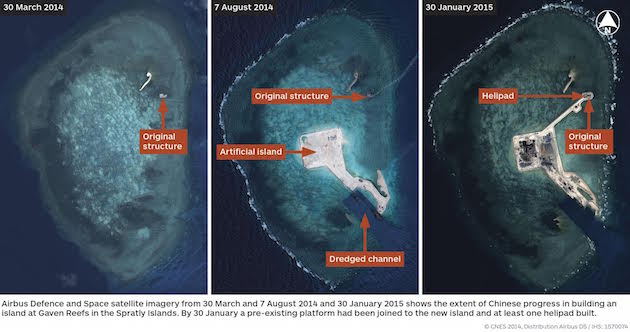 Security analysts say the reef construction is part of China’s plan to extend control over the entire South China Sea through what Beijing is calling the "Nine Dash Line" an ill-defined boundary covering the strategic waterway.

"Constructing artificial islands in the South China Sea to further its territorial claims is simply a continuation of China’s regular disregard for international norms and its refusal to resolve territorial disputes in a responsible manner," Forbes said.

"I believe it is imperative that the Defense Department evaluate its plans for future military-to-military exchanges with Beijing in the context of China’s provocative behavior in the region," Forbes added. "If defies logic to reward destabilizing behavior with further U.S. military engagement."

Despite Chinese aggressiveness toward the United States over the past months, the Pentagon has not scaled back its military exchanges with the Communist Party-ruled People’s Liberation Army.

"Why is DoD enhancing exercises with China, when the State Department is asking China to stop construction in the South China Sea?" one defense official said.

Pentagon spokesman Lt. Col. Jeff Pool said, "We have no announcement regarding changes to our military to military engagement strategy with China at this time."

The Chinese buildup in the South China Sea has alarmed some Pentagon officials concerned that it is part of a calculated strategy to seize control of that body of water, used as a major transit route for oil and other goods.

The buildup has taken place during the past several years under China’s Supreme Leader Xi Jinping, who had promised to develop a new model of closer relations with the United States.

"China's leaders could be persuaded to halt this construction if Congress and the president put pressure on Beijing," said Michael Pillsbury, a Pentagon consultant and China specialist. "The so-called ‘friends of China’ tend to block such action."

Pillsbury, director of Center for Chinese Strategy at the Hudson Institute, is the author of a new book, The Hundred-Year Marathon, that reveals a successful Chinese strategic program since the 1970s to gain resources, including in the South China Sea, as part of a long-term plan first put forward by Mao Zedong to assist China in surpassing America and ending U.S. global hegemony.

John Tkacik, a former State Department official, said China’s drive for South China Sea control has been a long-time goal of Chinese leadership since the Communist regime was founded. China began invading and seizing South China Sea islands in 1974 and continued to the present.

"Over the past 15 years, the Chinese have embarked on this new strategy of massive construction on what had been submerged landforms, and are now in a position to both enforce their claims, not just to the islets themselves, but to the entire million square miles of the South China Sea," Tkacik said.

"Clearly, Beijing intends to occupy and populate these new outposts with the goal of establishing maritime enforcement, not just over the islands and their fisheries and seabed mineral resources, but over international maritime and aviation transportation as well," he said.

The construction appears part of a well-planned strategy that could result in "all international transportation in the sea space and airspace of the Sea will soon be under Beijing’s enforcement jurisdiction," he continued.

"The South China Sea is the single most important confined seaway on the face of the earth because nearly a third of all global shipping passes through it each year," said Tkacik, now a senior fellow at the International Assessment and Strategy Center.

Deputy Secretary of State Tony Blinken made no mention of China’s rebuff during a speech in Tokyo after his visit to Beijing. Instead, he said U.S.-China cooperation "has grown deeper and wider."

However, he also noted that "we are firm in our stance on maritime security."

"Free commerce requires free waterways for ships to pass," he said. "It requires that the needs of business take precedence over squabbles over rocks and shoals."

"The true question at the heart of these conflicts is who controls access to Asia's abundant energy resources," Blinken said. "The region depends, as you know, on sustainable, affordable, and reliable access to diverse energy supplies—which in turn rely upon the safe and reliable transport of oil and gas in maritime channels. Almost a third of global crude oil and over half of global LNG passes through the South China Sea, making it one of the most important trade routes in the world."