Carville continues criticism of Obama campaign on the economy

Carville: People want to know Obama 'understands the depth of the problem'

Democratic consultant James Carville continued his critique of the Obama campaign's treatment of the economy, in a "Good Morning America" segment Wednesday.

"I'm worried that when the White House and the campaign talks about the progress being made, people take that as a signal they think things are fine," Carville said.

Carville was one of three Democratic strategists that authored a memo released Tuesday, which warns that President Obama might face an "impossible headwind in November" if he doesn’t change his economic messaging to the middle class.

GEORGE STEPHANOPOULOS: And, Jake, the grumbling in Democratic ranks is getting a lot louder.

JAKE TAPPER: it sure is. Top Democrats are sounding the alarm. They're worried that President Obama's economic message is tone-deaf. The Ragin’ Cajun is raging again, and the message is the same as it was in 1992. It's the economy, stupid. But this time, Democratic consultant James Carville is aiming that message at his own party. He's very worried that President Obama's current economic message to voters will only help Mitt Romney win.

JAMES CARVILLE: I'm worried that when the White House and the campaign talks about the progress being made, people take that as a signal they think things are fine. And people don't feel they ought to believe that.

TAPPER: As the president did overnight, campaigning in battleground state, Pennsylvania.

BARACK OBAMA: We are in a stronger position. We are moving in a better direction than when I took office.

TAPPER: Carville desperately wants President Obama to win. But he says the president should acknowledge how bad things remain for millions of Americans because of the recession that began in 2007. Carville says President Obama should focus his message on what he wants to do if given a second term.

CARVILLE: They want to be reassured that he understands the depth of the problem and that he has a plan to deal with the deterioration of the middle class.

TAPPER:  Mr. Obama has work to do. In a new ABC/Washington Post poll, swing of independents have a negative view of the president's plans for the economy. Fifty-four percent negative for 38 percent positive. Mitt Romney's scores aren't as bad. 47 percent negative to 35 percent positive, with more undecided voters—meaning Romney has less criticism and more room to maneuver.

MITT ROMNEY: I think people recognize that the president may be well-meaning, but he's just out of touch with what's happening across the country.

TAPPER:  George, on Thursday, President Obama will go to Cleveland where he will deliver a major economic address. Aides say, it will be a framing address. He will present the contrasting economic visions of his second term versus a President Mitt Romney. George?

STEPHANOPOULOS: So, he may be edging in the direction that Carville was just calling for?

STEPHANOPOULOS: Jake, thanks very much. 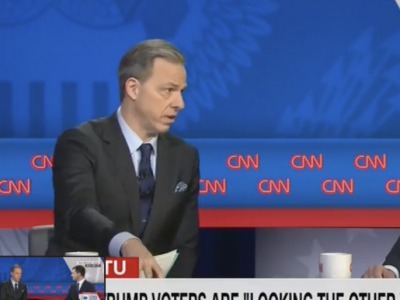