A four-day offensive by Kurdish Peshmerga began Sunday, Jan. 31, and ended with the seizure of two Arab villages southeast of Mosul, according to Falah Zrari, a Kurdish-American fighter who spoke with the Washington Free Beacon about the battle.

Zrari, 34, is an unpaid, volunteer fighter with the Kurdish military. 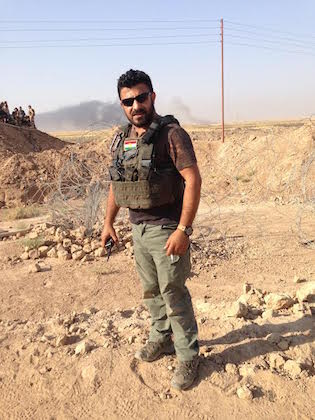 The attack on the villages began Jan. 31 and ended with a six-hour battle that lasted through the early hours of Feb. 5, Zrari said. The fight was a success for the Peshmerga, and resulted in more than 60 ISIS fighters being killed, and only one wounded Peshmerga.

For months the villages had been launching areas for Katyusha rockets fired at Peshmerga positions on the Makhmour front, 100 km south of Mosul and 50 km north of Kirkuk.

The Peshmerga assault occurred only a few days before up to 4,500 Iraqi troops began massing south of Mosul in preparations for a campaign targeting ISIS’s hold on the city.

American and Kurdish news outlets reported Monday that troops from the 15th and 16th divisions of the Iraqi Army will take part in operations to retake Mosul, Iraq’s second largest city, although the timing of the campaign is up in the air.

AFP cited an unnamed Iraqi Brigadier General who said three Iraqi brigades are on location already to begin operations against Mosul. The city was captured in a by ISIS forces in June 2014.

Marine Gen. Joseph F. Dunford Jr., the chairman of the Joint Chiefs of Staff, told the New York Times in late January the U.S. military is debating whether to integrate with Iraqi army and Peshmerga forces from a command base in eastern Anbar Province, or whether to operate from a position closer to the north. U.S. forces have been using a training hub at Al Taqqadum, an Iraqi base near the town of Habbaniya in eastern Anbar Province.

Preparations for the recapture of the city have been underway for months. Rudaw, a Kurdish news outlet, reports that close to 9,000 Peshmerga are believed to have been trained in urban warfare by coalition forces since last year. The trainers have been supplied by Germany, the UK, Italy and Canada, according to Rudaw.

American air support has been key to shaping the battlefield, according to Zrari, the Kurdish-American fighter.

"They used four vehicle bombs against us. We got two of them with Milan rockets and the other two were taken out by air strikes from coalition aircraft," Zrari said. "About 10 of us were all firing our weapons at a vehicle about 600 meters away, but we couldn’t hit it with rocket-propelled grenades or our machine guns. Finally, it went up in ball of flame when the overhead jet got it," he said.

Other media reported dozens of air strikes in the vicinity of the see-saw battle for the villages of Karmrdi and Kudila.

The Peshmerga were aided by fighters of the Wahibi tribe of Arabs who had been pushed out of the villages last year by ISIS.

The battle was reported on the Kurdish news site Rudaw on Feb. 3. A Peshmerga commander told a Rudaw reporter that ISIS is obliged to use vehicle-borne explosives, booby traps and car bombs as primary instruments because of diminished troop strength.

Mr. Zrari, who until recently lived in Nashville, Tenn., is one of a few dozen American citizens who are fighting alongside the Peshmerga as volunteers. Other Americans serve as volunteers with the Peshmerga near Kirkuk, while others are serving with Kurdish militia, known as the People’s Defense Units, or YPG, in Northern Syria.

The volunteers in northern Iraq fight alongside the Peshmerga only on an "as needed basis" and are free to go back home whenever they want, according to Zrari.

Zrari, who is originally from Erbil, served as a translator for U.S. special forces for six years, and was given permission to emigrate to the United States in 2009.  He spends five days a week at his outpost at the Makhmour front, and if the sector is quiet, he spends weekends helping with the family-owned store in Erbil. He is armed with an AK-47 rifle and says he has been in 10 engagements so far.

"There are many Kurdish volunteer soldiers and foreign volunteers in the Erbil area," he said.

"When the call goes out for manpower, the Kurdish volunteers load up on trucks or their personal cars and drive to the outpost," he said. "Many are teachers, policemen, nurses, or doctors."

Additionally, there are between 20 and 30 volunteer fighters from the United States, Canada, and Europe, ranging in age from early 20s to upper 60s he said.

Also participating in the battle was John Cole, a U.S. Army veteran and volunteer fighter from Charlotte, N.C.  At 23, Cole may be the youngest of the foreign fighters in the Erbil area.

Cole, who sometimes mans a machine gun on armored vehicles, was interviewed on camera in December by Rudaw. Cole told the Kurdish news crew that he loved the Kurdish people and was proud to be serving with the Peshmerga.

When he stopped into a mall in Erbil to buy some personal items, he was stopped by a crowd of shoppers who insisted that they be photographed with the American fighter who stood head and shoulders above most Kurdish soldiers.

"I like it better to be a volunteer," Mr. Zrari says. " If I were a regular soldier, I would be restricted to one sector, and the pay would only be $400 a month. This way, I can move from one place to another and when the sector is quiet, I can go back to my business."