It was a warm June night in our nation's capital. So-called "protesters" openly defied the Democratic mayor's curfew order and refused to comply with social distancing guidelines. For the sake of all mankind, someone had to man up and stop the spread.

Enter the D.C. Army National Guard, which deployed a pair of military helicopters to neutralize the public safety threat. For their courageous efforts in the war against the COVID-19 pandemic and left-wing anarchism, these choppers are Washington Free Beacon Men of the Year.

Nearly three hours after the mayor's curfew went into effect on June 1, rambunctious libs continued to roam the streets, flagrantly rejecting the scientific consensus, all but welcoming the deadly virus into their lungs. The rioters' message was loud and clear: Their grandparents' lives didn't matter.

But they mattered to the National Guard helicopters—one Lakota and one Blackhawk, each with non-threatening medevac insignia—whose airmen had sworn to protect the country against all threats, foreign and domestic. The choppers flew low over America's ugliest city and hovered even lower over the crowds in an effort to enforce the mayor's order.

Government employees who had devoted their lives to public service, sometimes referred to as "cops," were exhausted and overwhelmed. The sight of military reinforcement descending from the air must have come as a joyous relief, as inspiring as the sight of Old Glory flying over Fort McHenry to a young Francis Scott Key during the Battle of Baltimore in 1814.

The libs reacted as libs tend to react: by tweeting hysterically, cowering in fear, and filing lawsuits. The airborne show of force was a pivotal moment in President Donald J. Trump's successful quest to restore law and order to our nation's streets and ultimately to declare victory over COVID-19. Months later, the virus is the one cowering in fear as Trump's vaccines enter the nation's bloodstream.

Bless you, military helicopters, whose "politically incorrect" names, inspired by brave warriors, have withstood the onslaught of censorship and "cancel culture," for forcing woke libs to obey the dictates of government officials and scientific experts. The phrase "poetic justice" gets thrown around a lot. But if this wasn't it, we don't know what is.

Could the choppers have gone even further to restore order in our nation's capital? Was the military's decision to deploy medical helicopters, as opposed to Apache gunships, an excessively cautious one? Of course. But that should not detract from the courage they showed and the honor they've earned.

Published under: Coronavirus, Men of the Year 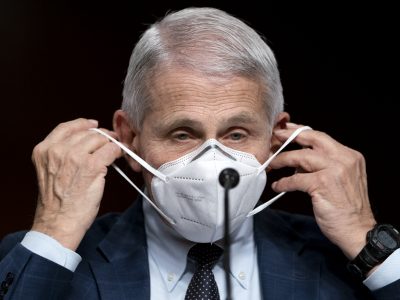