Who played the best practical joke this year? It wasn't a stand up comedian or some basic cable knobs tricking schlubs into acting like chickens for $10. No, it was a simple man from Detroit.

Kid Rock had us all convinced he was going to be Michigan's next senator, and then he went on Howard Stern and said, "Fuck no I'm not running for Senate. Are you kidding me?"

So yeah, Kid Rock may have played us and tricked us into buying a few $15.99 hats for a Senate campaign that won't exist, but man was it a fun ride.

It all got started this summer when the KidRockForSenate.com popped with the below amazing picture and what seemed like poll-tested slogans such as, "PIMP OF THE NATION." 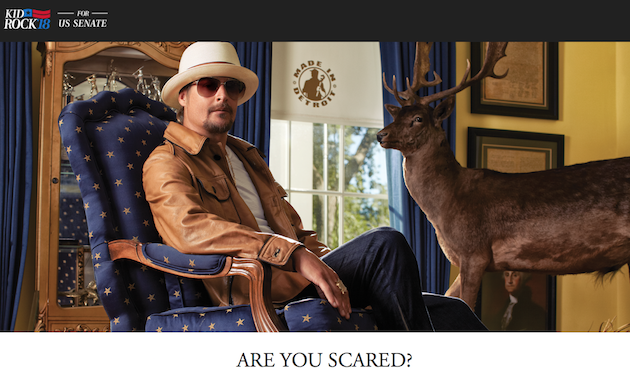 Kid Rock quickly confirmed he was behind the site and responded to the naysayers talking about boring stuff like filing with the FEC with a press release—headlined "ONCE AGAIN THE PRESS IS WRONG"—that should be taught in universities for the rest of time.

The release hit the press with some facts, such as when he actually is required to file with the FEC, and then moved on to more important things, like the new songs he was releasing at midnight.

Then, in a final stroke of genius, he finished his press release like this: 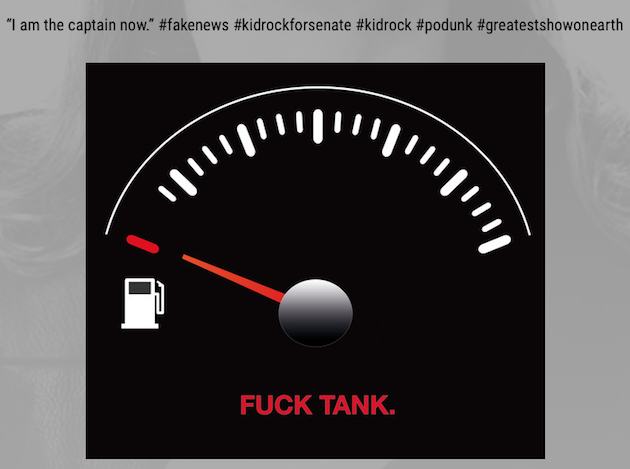 It was enough to convince Politico he was to be taken seriously. It was also enough to shoot him to the top of the polls.

He kept speculation going by launching a nonprofit organization aimed at promoting voter registration. The announcement, he said, had "democrats shattin in their pantaloons."

People continued to bother Kid Rock about whether he was going to run and whether he was following election laws, so he put out another press release to make two points on "fake news" about his campaign. Here's the bulk of the release:

"I am starting to see reports from the misinformed press and the fake news on how I am in violation of breaking campaign law.

#1 I have still not officially announced my candidacy.

Meanwhile, Kid Rock's career was booming. He opened Detroit's new $1 billion Little Caesars Arena, the home of a "Kid Rock's Made in Detroit" restaurant, with a series of six sold out concerts. Now Kid Rock has launched a new tour and released a new album. He also launched an American-made grill company that is, we presume, booming.

So we had fun and the American Badass is doing great, and although he says he's not running for Senate, he still has political aspirations.

These were Kid Rock's final words of a speech at the Little Caesars opener:

"Kid Rock for Senate has some people in disarray, wait until they hear Kid Rock for President of the U-S-A."

In the meantime, there is a recently vacated seat representing Detroit in the People's House and a Washington Free Beacon Man of the Year gives Kid Rock just the resumé he needs to win it.