The lame stream liberal media elite loves to beat up on Ryan Lochte.

NPR says he is a "professional public dummy." Other writers say that his brand is "stupid." Even the Washington Free Beacon's own Sonny Bunch—basically one of them—calls him a "noted dumb-dumb" and often mocks his intellect.

The anti-Lochte campaign reached its peak in 2016 when the bozos in the media tried to tear Lochte's reputation to shreds during the Olympics. For those of you who were living under a rock during the August smear campaign, here is how it went down.

It all started early in the morning on August 15 when Lochte ran into Washington Free Beacon MOY Billy Bush and told him about the wild night he had with his swimming buddies the night before.

Here is the clip of Lochte with Billy (he shows up at 2:10, if you want to avoid having to see Al Roker):

So, Lochte exaggerated his story a bit because he was still drunk like a champ and talking with Billy, who has a now-famous tendency to egg on his interview subjects. And for that the media turned him into the villain, choosing to believe the Brazilian cops, who said Lochte and his buddies vandalized a gas station as opposed to being the victims of a shakedown.

That is, until USA Today got surveillance footage showing that the cops were complete liars and vindicated Lochte.

Despite the best efforts of the haters, Lochte came home from Brazil as a hero after winning a gold medal in his fourth straight Olympics. He now has six of them, to go along with his three silvers and three bronzes.

Lochte would accomplish even more as the year progressed. In January, he asked out a really hot girl named Kayla Ray Reid through the internet and when he got back from the Olympics she agreed to marry him.

He used his keen social media skills to notice that she liked some super big ring on Instagram and then bought it for her. Then last week he announced that Kayla was pregnant with a little Lochte. 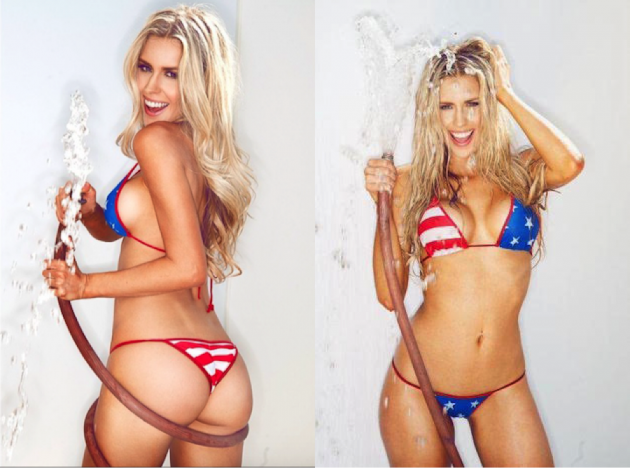 And she really loves Lochte.

It's hard to imagine how the year could have gone any better for Lochte.

He entered the year as a hero and is emerging as a legend.

So yeah, who's the "noted dumb-dumb" now? Not Ryan Lochte, Free Beacon Man of the Year.