Frank James, the man arrested for Tuesday's New York City subway shooting, is a black nationalist and outspoken racist who railed against whites, Jews, and Hispanics. A careful reader of the New York Times could be forgiven for overlooking that. In a nearly 2,000-word article on the attack, James's race is not mentioned. The same is true for the coverage offered up by Reuters; the Washington Post only mentioned James's race in relation to his condemnation of training programs for "low-income Black youths."

Media critics on the right say that the conspicuous omission of James's race from these news reports illustrates a trend among prestige papers, which deemphasize or omit the race of non-white criminals while playing up the race of white offenders. But is it a real pattern?

Yes. A Washington Free Beacon review of hundreds of articles published by major papers over a span of two years finds that papers downplay the race of non-white offenders, mentioning their race much later in articles than they do for white offenders. These papers are also three to four times more likely to mention an offender's race at all if he is white, a disparity that grew in the wake of George Floyd's death in 2020 and the protests that followed.

The Free Beacon collected data on nearly 1,100 articles about homicides from six major papers, all written between 2019 and 2021. Those papers included the Chicago Tribune, Los Angeles Times, New York Times, Philadelphia Inquirer, San Francisco Chronicle, and Minneapolis's Star-Tribune—representatives of each paper did not return requests for comment for this article. For each article, we collected the offender's and victim's name and race, and noted where in the article the offender's race was mentioned, if at all.

The data suggest an alarming editorial trend in which major papers routinely omit information from news reports, presenting readers with a skewed picture of who does and doesn't commit crime. These editorial choices are part and parcel with the "racial reckoning" that swept newsrooms in the wake of Floyd's murder, which saw journalists dramatically overhauling crime coverage to emphasize the view that the criminal justice system is racist at the root—perhaps at the expense of honesty about individual offenders' crimes. 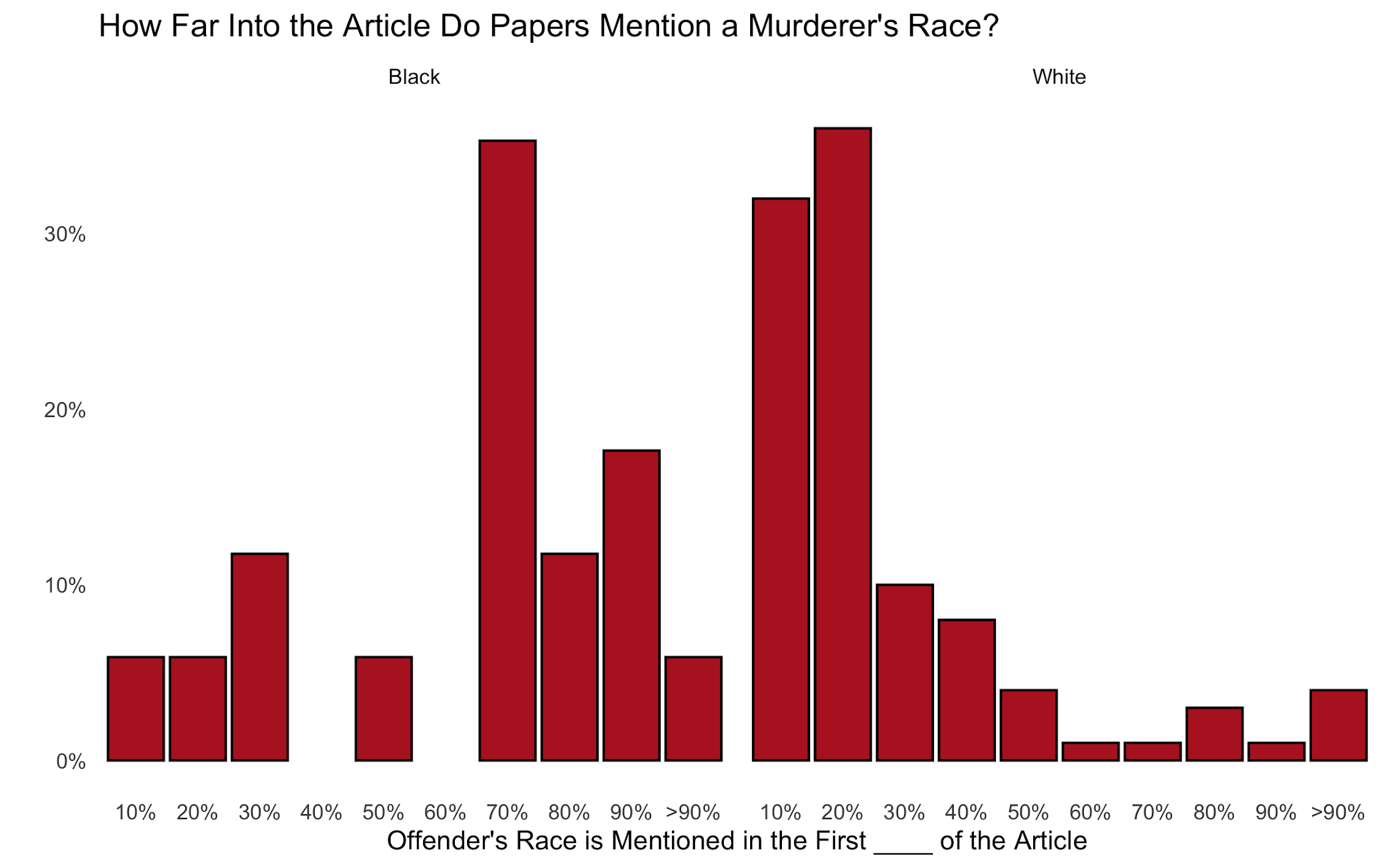 The chart above indicates that papers are far quicker to mention the race of white murderers than black. (Those two races account for 92 percent of mentions in the data, so others are not shown.) Half of articles about a white offender mention his race within the first 15 percent of the article. In articles about black offenders, by contrast, mentions come overwhelmingly toward the end of the piece. Half of the articles that mention a black offender's race do not do so until at least 60 percent of the way through, and more than 20 percent save it until the last fifth of the article.

Of course, journalists choose not only where in a piece to mention an offender's race, but also whether to mention it at all, and omissions can skew a reader's perspective.

To measure these choices, we identified the race of the offender in roughly 900 stories where his name, but not his race, was mentioned, first by looking at the race of people with the same name in Census data, and then hand-confirming race based on mug shots or other images published in local news stories. 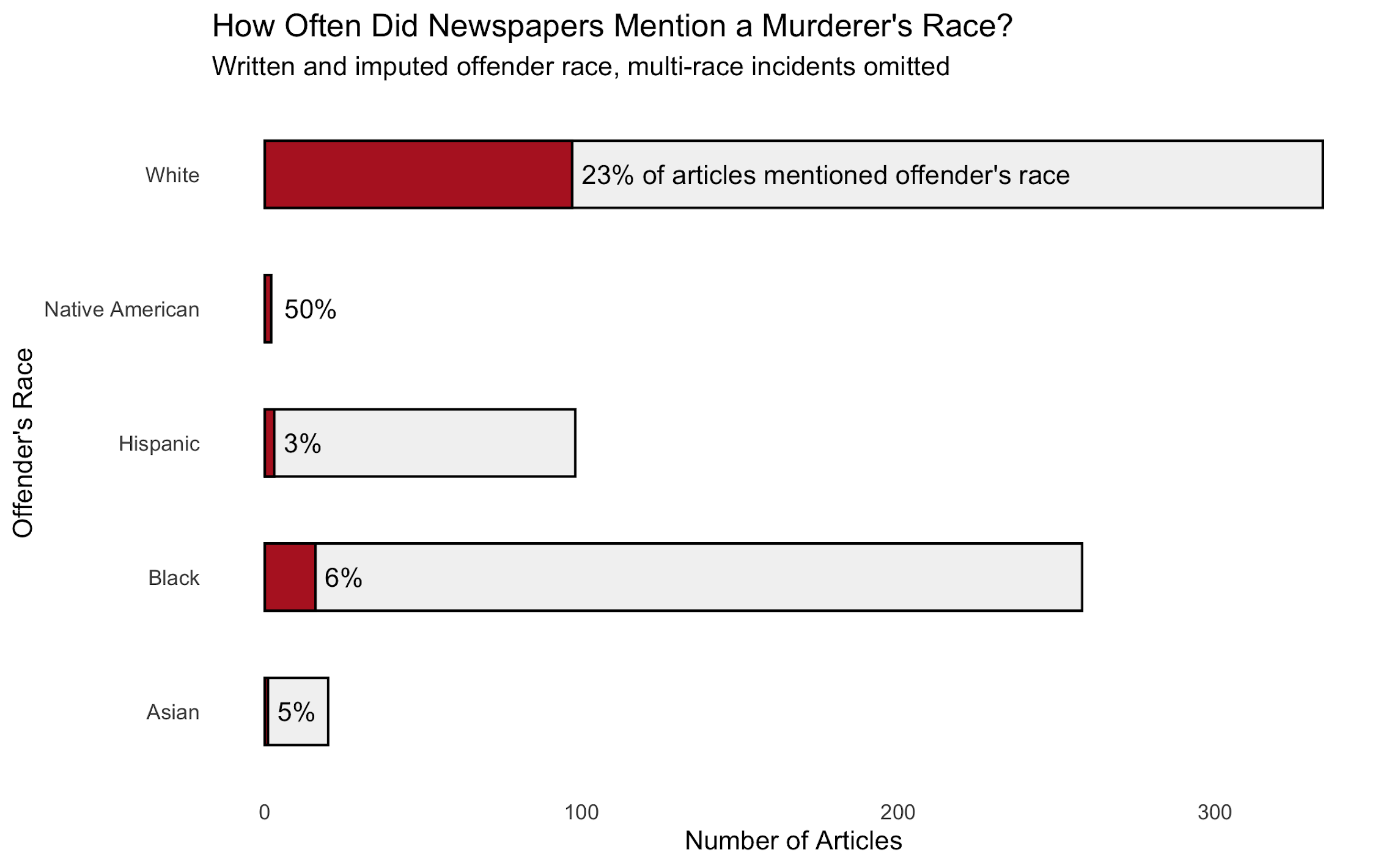 Doing so permits an estimate of how often journalists highlight an offender's race—or don't. Again, the skew is startling: White offenders' race was mentioned in roughly 1 out of every 4 articles, compared with 1 in 17 articles about a black offender and 1 in 33 articles about a Hispanic offender.

This effect is driven in part by a handful of major news stories involving white perpetrators, though the attention paid to these stories is also an editorial choice. But even after omitting reports about white offenders Kyle Rittenhouse, Derek Chauvin, and the killers of Ahmaud Arbery, the race of white offenders is mentioned in 16 percent of cases, two to three times the rate at which the race of black offenders is mentioned. (Middle Eastern offenders were labeled as Asian in this analysis, but labeling them as white results in only a small change to the race mention rate.) 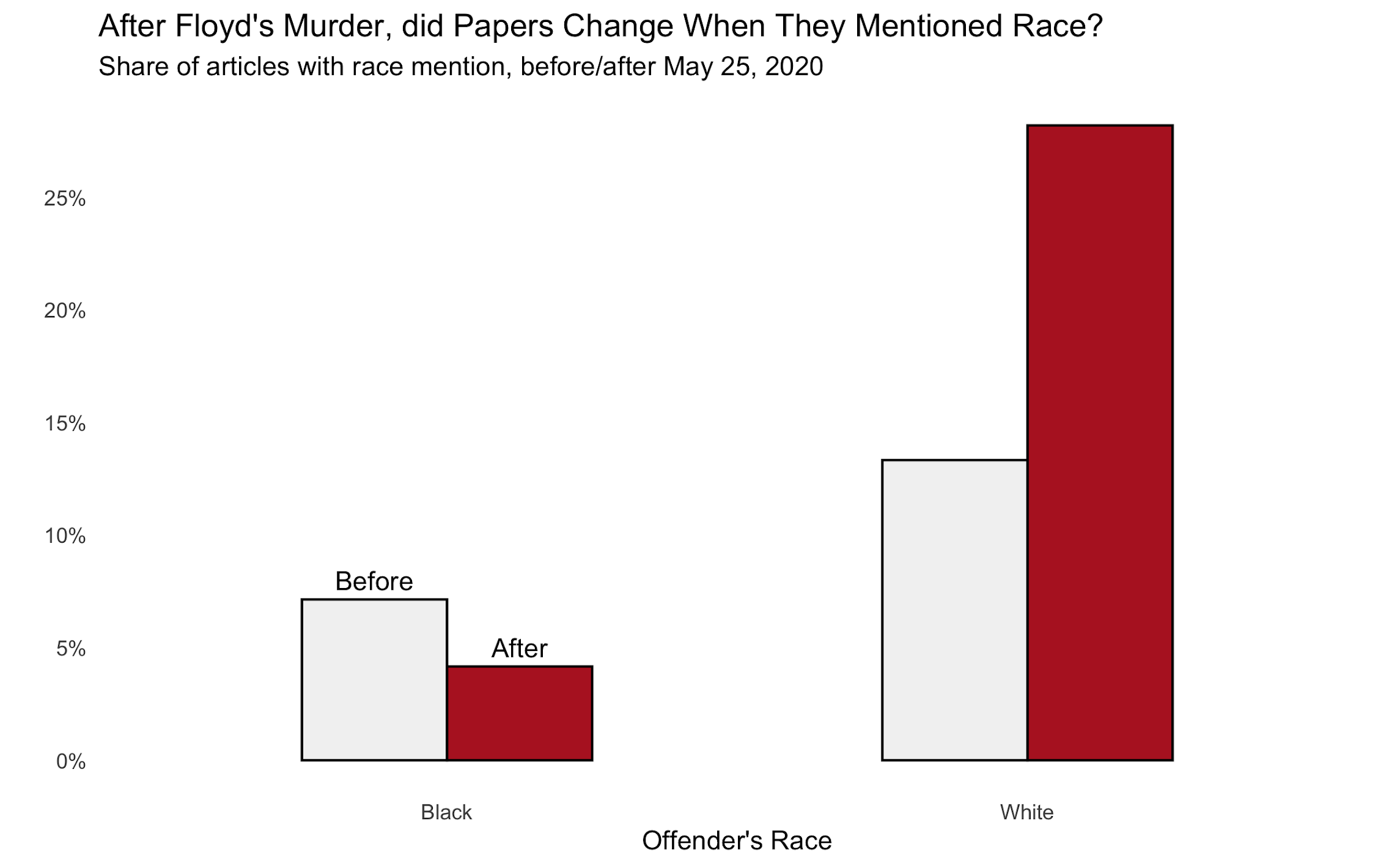 This disparity widened following George Floyd's murder. Before May of 2020, papers were roughly twice as likely to mention the race of a white (13 percent of stories) versus a black perpetrator (7 percent). After May of 2020, the numbers were 28 percent and 4 percent, a ratio of seven to one. Even omitting the above-mentioned stories, papers still mentioned race in 23 percent of stories about white killers post-Floyd, a six-to-one ratio.

It could be that there were more stories in which a white offender's race was relevant after Floyd's death than before. But it is also easy to see how the increased attention to white murderers represents a change in what reporters and editors thought it was, and was not, important for their readers to hear about, particularly after they publicly committed to revamping their crime reporting following Floyd's death.

Newspapers across the country—including the Inquirer—stopped publishing mugshot galleries in part because, two Florida newspapers wrote, they "may have reinforced negative stereotypes." Others committed to overhauling their language, substituting phrases like "formerly incarcerated person" for "felon" to respond to what the Poynter Institute described as an "inextricabl[e]" link between reporting on crime and "race and racism." And the Associated Press amended its style guide to discourage the use of the word "riot," which allegedly has racist connotations.

At the same time, major newsrooms have prioritized "racial justice" coverage, part of a push for what the journalist-cum-activist Wesley Lowery called "moral clarity" over "objectivity": writing news reports that take the sides on contested issues with the goal of advancing a political objective.

Such "moral clarity" may mean downplaying black crime and emphasizing white crime. In the case of offenders like James, it means leaving readers in the dark about an important element of the story—journalistic malfeasance that is, of course, in service of the greater good.

Charles Fain Lehman is a fellow at the Manhattan Institute and a contributing editor of City Journal.