The Washington Post published an article Tuesday that described the Chinese Communist Party as a "ticket to a better future" for many citizens.

"It's easy for people outside China to view the Communist Party as a throwback to Soviet times, which, in many ways, it is," the article reads. "But in China, the reality is more complicated."

"The [CCP] is relevant to many people's lives. … For many, it is a ticket to a brighter future," it continues.

The article, which highlights how young Chinese people can become party members to access "better education prospects" and "nicer apartments," is at odds with a growing concern in the United States about the CCP's human rights abuses and authoritarian practices.

In recent months alone, the CCP has orchestrated the transportation of thousands of Uyghurs to forced labor camps, committed a hostile takeover of Hong Kong, and upgraded its military capabilities as it stares down Taiwan for potential reclamation.

Despite its transgressions, the Post has had a lucrative business relationship with the CCP. A Tuesday Washington Free Beacon report revealed that the Post, among other high-profile media companies, has accepted hundreds of thousands of dollars from Chinese state media to run English versions of Chinese propaganda articles. Though the Post has not engaged in such practices since 2019, a Post spokesman did not clarify if the paper's relationship with CCP media has been terminated.

"Communism never leads to a better future. It only leads to a path of deception, corruption, poverty, and death," said Rep. Vicky Hartzler (R., Mo.). "The #CCP are holding the people of #China hostage as they commit atrocious crimes against humanity. China is not the future." 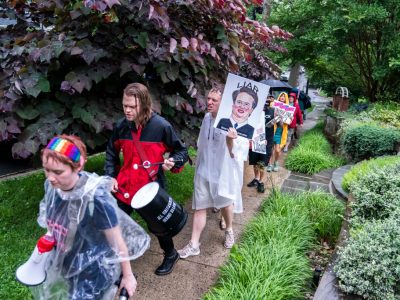