Karen Attiah, the Washington Post‘s global opinions editor, deleted a tweet in which she said white women are "lucky" that "we are just calling them ‘Karen's," and not "calling for revenge."

Attiah wrote that "the lies & tears of white women" have contributed to injustices against African Americans. She listed as examples the 1921 Tulsa race massacre, the murder of "Emmet [sic] Till," the exclusion of black women from feminist causes, and the majority of white women voting for President Donald Trump in 2016.

"White women are lucky that we are just calling them ‘Karen's'. And not calling for revenge," she wrote. She then deleted the tweet. 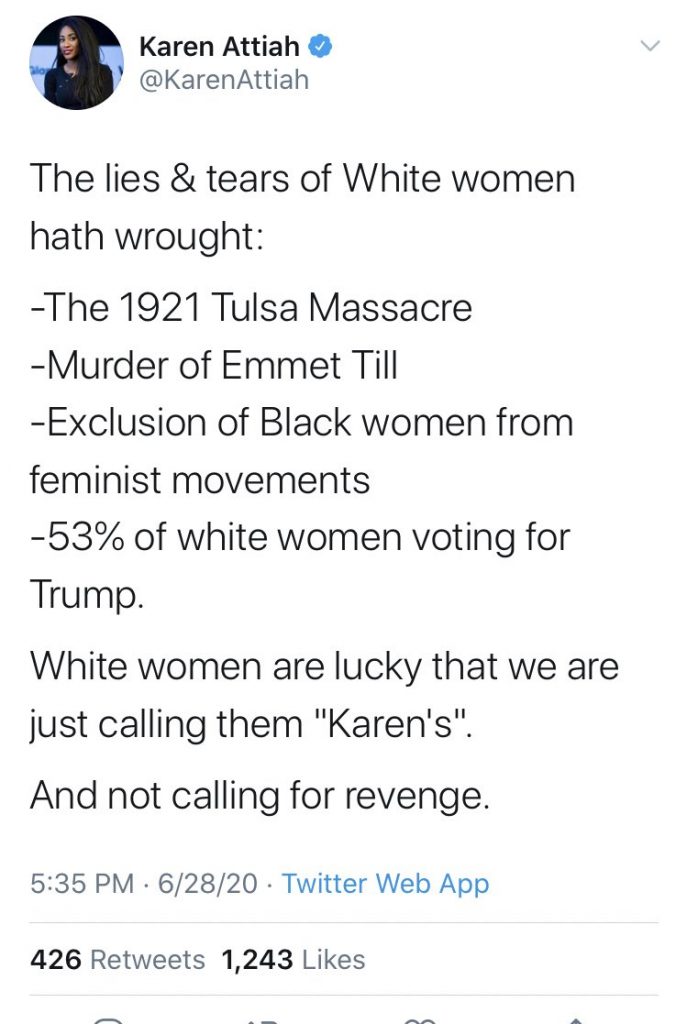 Neither the Post nor Attiah responded to requests for comment. Shortly after deleting the tweet, Attiah tweeted, "Non, je ne regrette rien," a French phrase that translates to, "No, I do not regret anything."

The publication's policies and standards state that Post journalists "must refrain from writing, tweeting or posting anything – including photographs or video – that could objectively be perceived as reflecting political, racial, sexist, religious or other bias or favoritism."

The Post‘s social media policy has repeatedly come under fire as the publication's leadership has been criticized for being too "ill-equipped to deal with social media in the modern era." The policy created a system where "white, male reporters often get away with potentially problematic messages, while female and minority colleagues are not given the benefit of the doubt," according to an internal memo obtained by New York Times writer Ben Smith.

Attiah previously criticized a Post story about a party that occurred in 2018 where a woman arrived dressed in blackface, intended to mock former Fox News and NBC anchor Megyn Kelly. The woman eventually left the party after being confronted a number of times about the costume and apologized to the host the next day.

The story's publication resulted in the woman's firing, and reporters inside the Post questioned the news value of the story. Attiah publicly questioned the decision to publish it.

"Black people are literally being lynched and shot in the streets in America. A random lady in [sic] dressing like a famous lady in blackface at a party 2 years ago seems the least of our concerns right now," she wrote on Twitter.