To the MSM, John McCain Was a Maverick. Joe Manchin Is an Obstacle.

Not all 'no' votes are created equal

Senator Joe Manchin of West Virginia has found himself in the hot seat after announcing he wouldn't support Build Back Better, President Joe Biden's ambitious climate and social spending bill.

His colleagues in the Senate said he didn't have "the courage to do the right thing," and members of the House called the rationale for his vote "a farce." News outlets reported on Manchin's "betrayal" and questioned his status as a moderate. Some reporters leapt to Twitter to cry out that Manchin's decision was "objectively devastating" for the planet.

But it wasn't so long ago that a senator bucking his party and his president was greeted by the press in a much different way. Former senator John McCain of Arizona cast perhaps his most famous vote in 2017, torpedoing the Republican effort to repeal Obamacare. This was an effort the GOP had made the centerpiece of its 2016 election strategy, and McCain's thumbs-down was a deliberate middle finger to his own party.

McCain was greeted as a hero, a "maverick" who had "put country before party" for supposedly ending the repeal efforts that would continue on. Manchin's decision has been framed as a temporary roadblock and a self-interested betrayal.

Looking at the headlines side-by-side makes the difference in coverage clear.

The Washington Post was thrilled that McCain "killed the GOP's health care fight." Build Back Better, despite Manchin's resounding no, hasn't been killed at all. It just has some stuff that Manchin "doesn't like." 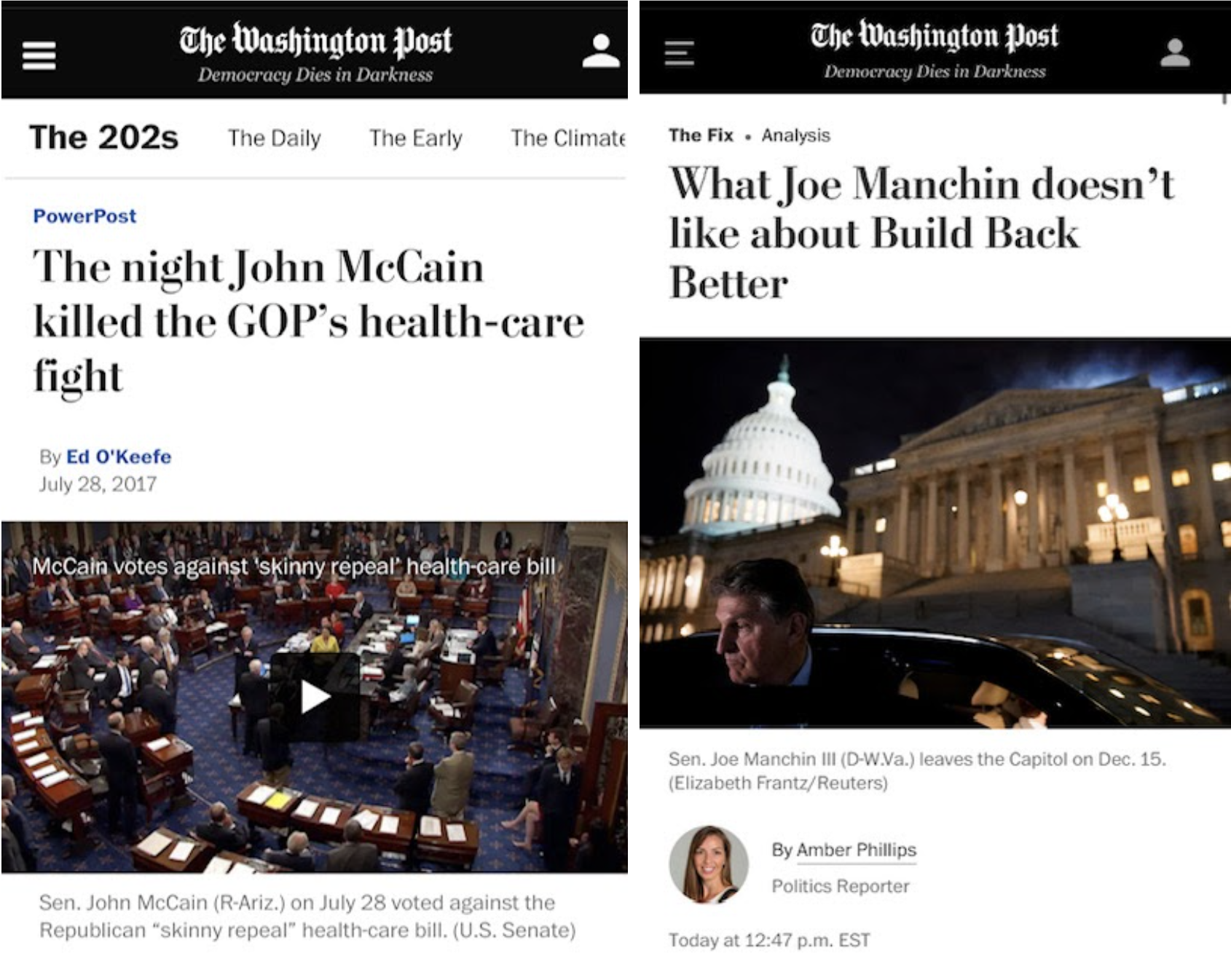 To the New York Times, McCain's vote against Obamacare repeal was "decisive." But Manchin's announcement that he won't support Build Back Better has the Times looking for "a new way forward" for the legislation. 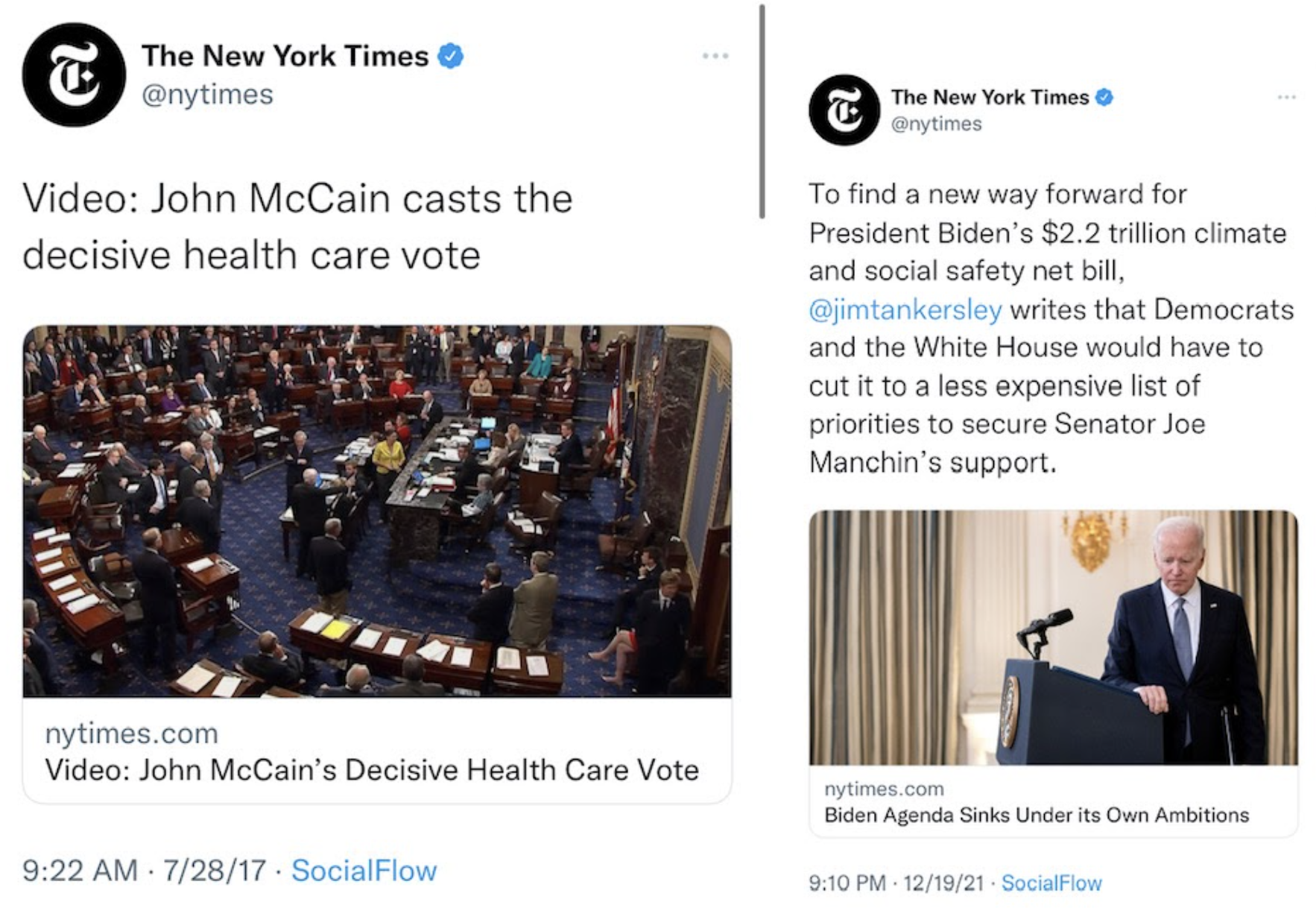 Over at MSNBC, McCain's vote was gleefully credited with "dooming Obamacare repeal." Manchin's decision led them to ask: "What happens next?" 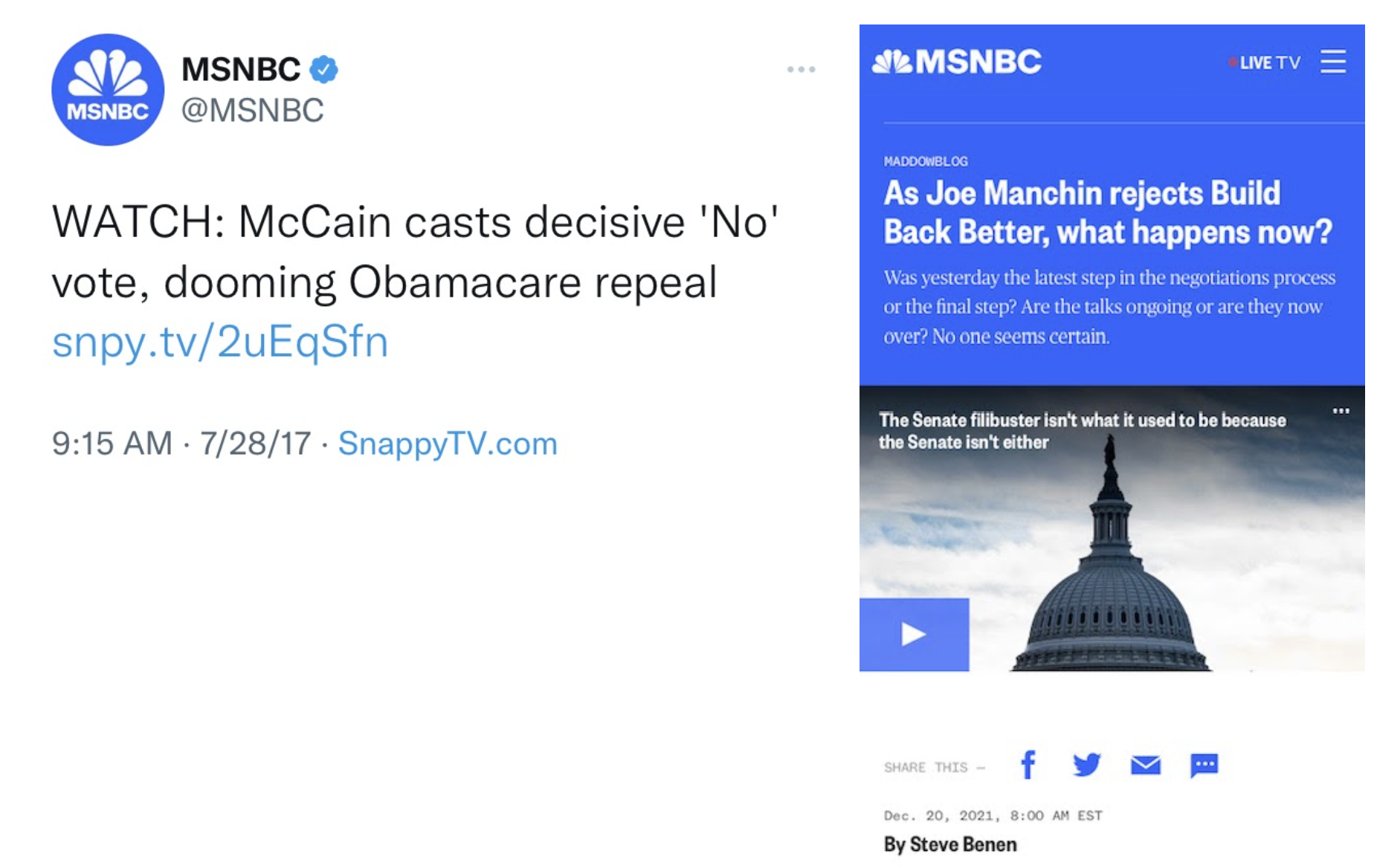 For Business Insider, McCain's no vote was a dramatic and fatal move that you just had to see. Manchin's "demands," on the other hand, are framed as unreasonable threats. 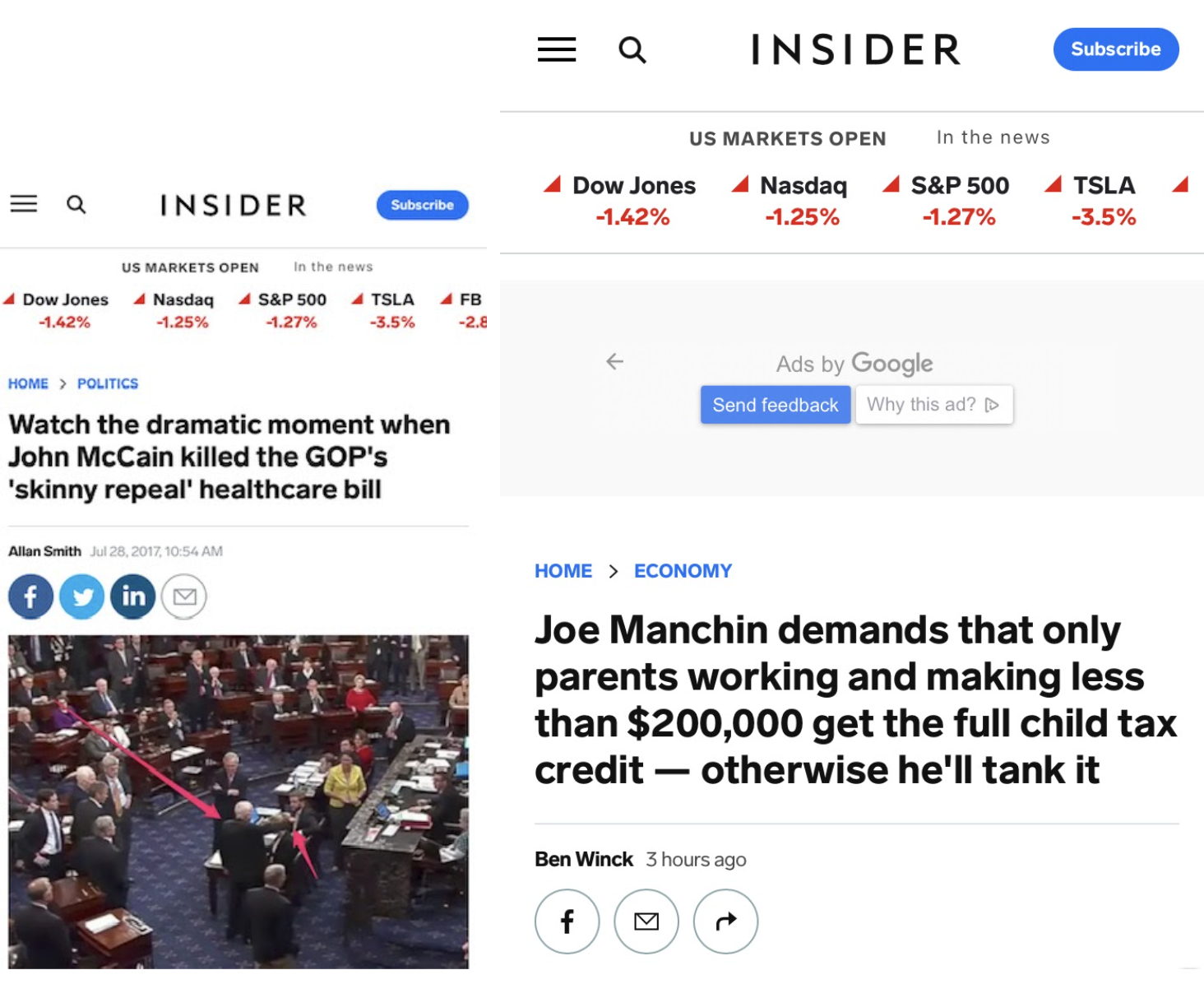 Politico hailed McCain as the "maverick" who "tanked Obamacare repeal" in a "stunning rebuke to President Trump and his own party leadership." Manchin not only doesn't get the same heroic treatment for defying his political party, he also gets framed as the bad guy. 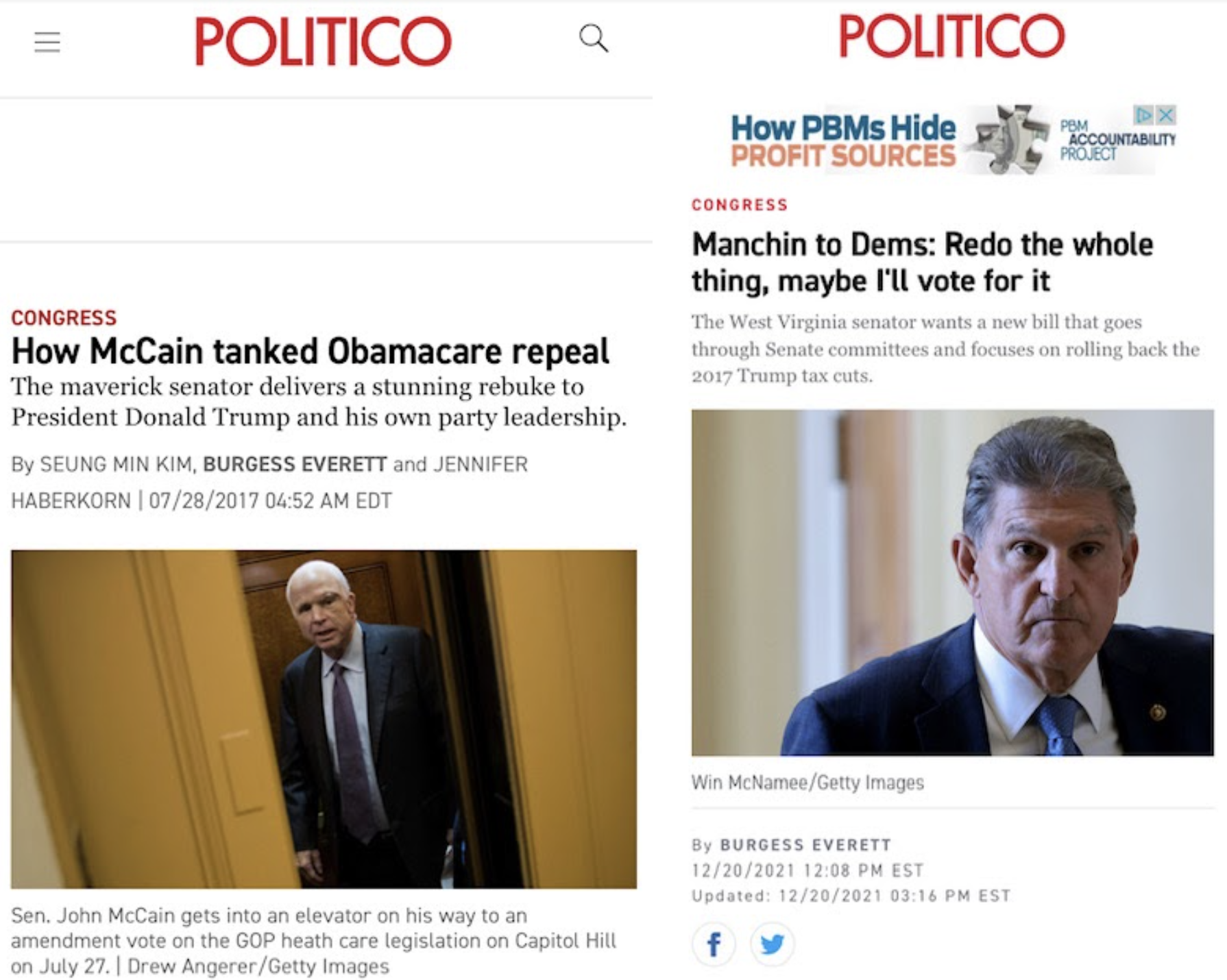 Huffington Post could hardly contain its excitement at the "shock and awe!" of McCain's no vote for Obamacare. Manchin, meanwhile, is described as a weakling who let his hurt feelings determine his vote, even though it was more likely due to his long-standing and very public opposition to the bill. 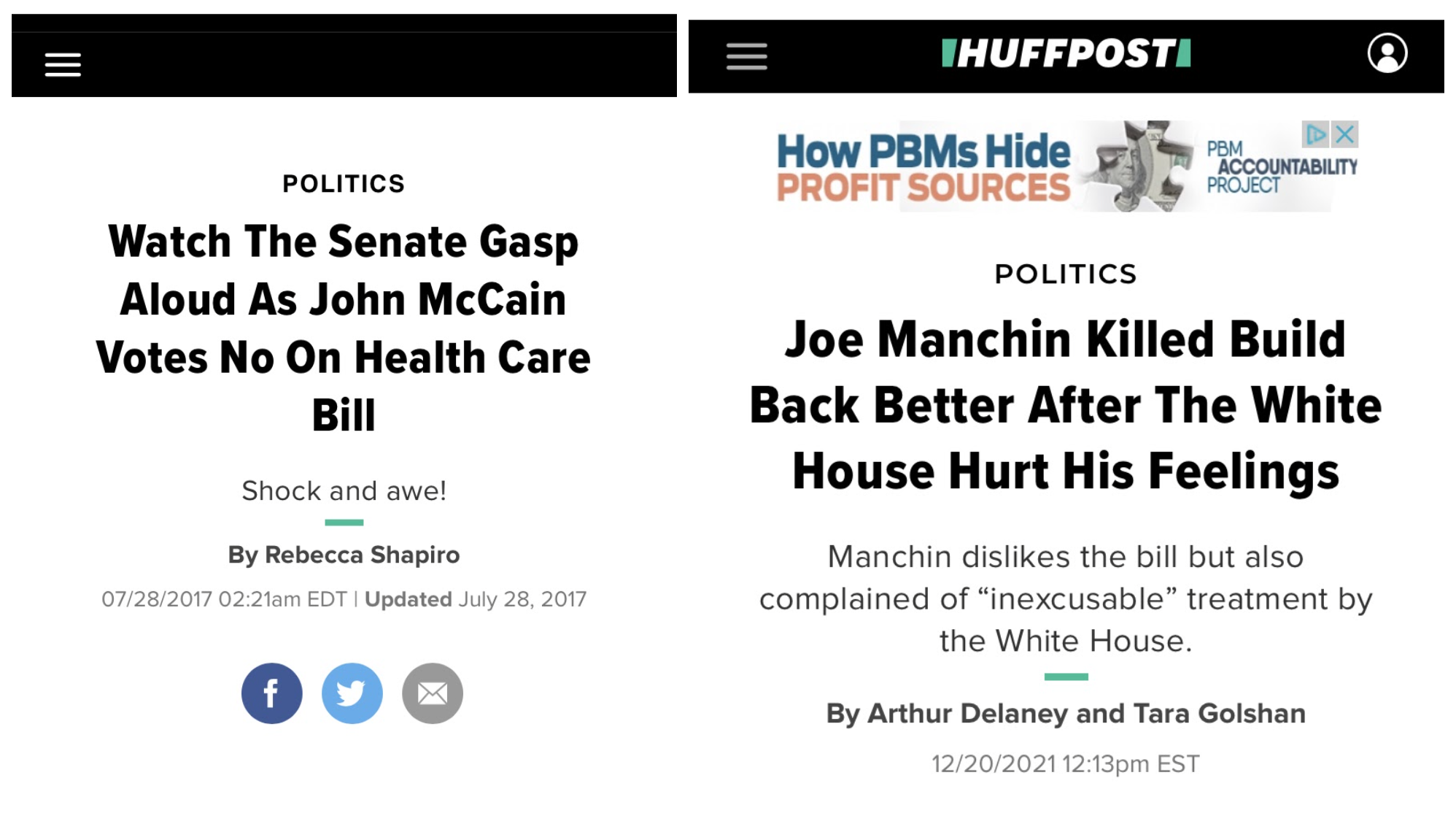 Maybe Manchin shouldn't hold out hope for CNN to cover his "maverick moment" in a positive light. 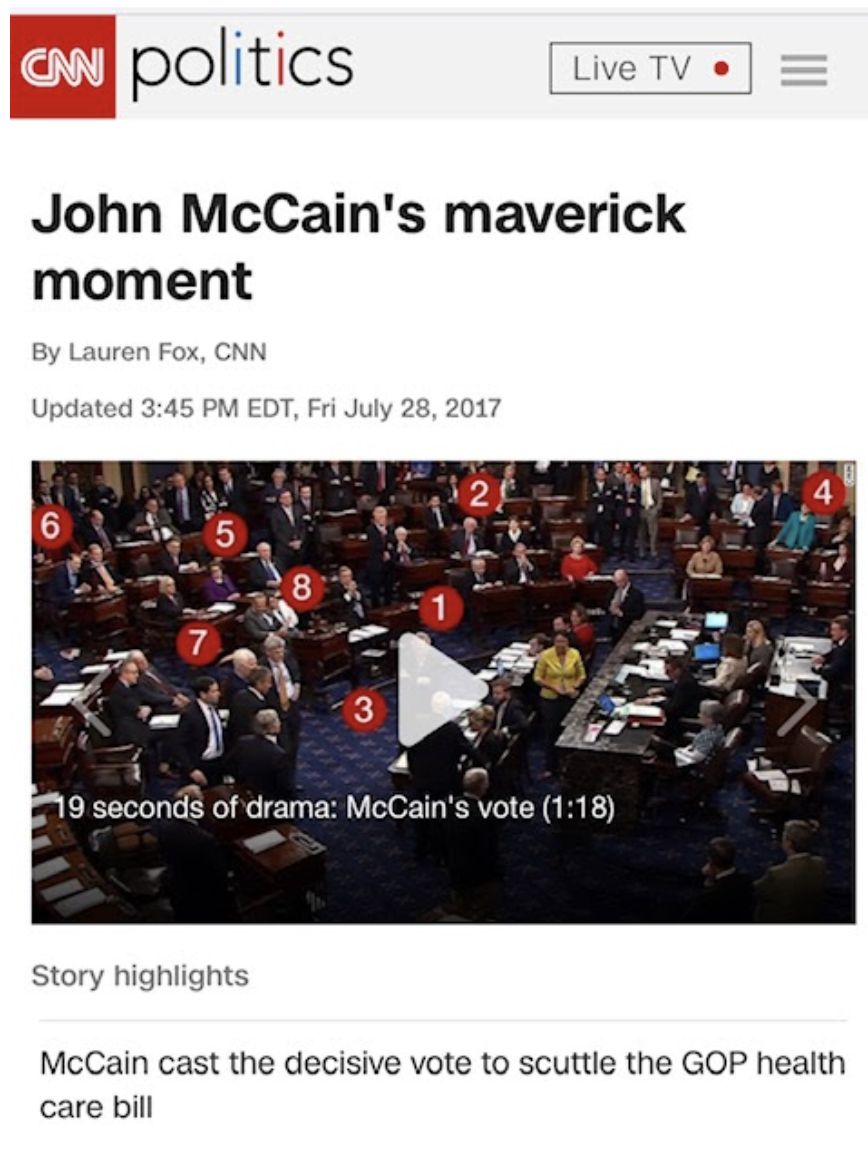