Before its demise in 2016, the blog Gawker identified itself with the mantra, "Today's gossip is tomorrow's news." The saying drew on a long history of tabloid journalism that eschewed standard journalistic ethics for a focus on rumors and grievances. In Scandalous: The Untold Story of the National Enquirer, the sprawling history of arguably the most influential tabloid in all of media is traced from its origins in the Italian mafia to its inextricable ties with the current occupant of the White House. By documenting the tabloid's peaks and valleys, Scandalous offers an incisive look at an American media culture that helped give rise to the celebrity presidency.

The first half of the documentary focuses on the story of the man behind the publication: Generoso Pope Jr. The documentary details the sheer power of Pope’s presence: Former employees describe "Friday Night Massacres" where Pope would bring in a catered dinner for the tabloid's staff and allow the booze to flow liberally. As his employees indulged, Pope sat quietly in the center of the room smoking cigarettes and evaluating his staff. By the end of the dinner, someone would be fired. "It was best if you didn't engage with him until he knew you," Steve Koz, the eventual editor of the magazine, says.

Pope purchased the publication in 1952 with a $75,000 loan, allegedly obtained from Italian-American crime boss Frank Costello. Pope brought a cutthroat, take-no-prisoners approach to the newsroom, pitting editors and writers against each other and creating a work environment that would not be tolerable by today’s standards. His larger-than-life presence did allow staff to thrive on his largesse. Former employees tell of all-expenses-paid trips around the world booked on a moment’s notice. It is the type of decadence unfit for an age that also brought a rapid contraction of the media market.

The documentary stops short of condemning its subject and is careful to credit the Enquirer with delivering vital reporting on some of the last century’s biggest stories. But it is not afraid to illuminate the compromises National Enquirer staff made. "Things were exploded," Val Virga, a former photo editor for the Enquirer, tells the filmmakers. "You'd just take a story and you make it more interesting. You don't change the facts. You just sensationalize it. That's what tabloids do."

The Enquirer did just that—and more. The documentary highlights the stories the tabloid helped break well after Pope's death in 1988: the O.J. Simpson trial, Princess Diana's death, Monica Lewinsky. The death of Diana, in particular, sparks moments of genuine self-reflection on the parts of the tabloid's former staff, who recall the intense criticism the Enquirer received for its breathless coverage of Diana’s personal life.

Forty-five minutes into the film, it briefly delves into the tabloid's coverage of Trump's affair with and subsequent marriage to Marla Maples. As with anything tangentially related to Trump, however, the audience is left wondering when Trump will reenter the picture. Scandalous leaves an exploration of Trump's relationship with David Pecker, who purchased the publisher of the tabloid in 1999, to the final 20 minutes of the documentary.

This may prove to be a smart decision on the part of the filmmakers for a Trump-fatigued viewer, and the overview of the relationship between Pecker and Trump warrants its own documentary series. Indeed, Trump's presence in the documentary is a challenge for the filmmakers: It is impossible to tell the story of the Enquirer without Donald Trump, and Trump's story without the Enquirer. But the relationship is so complicated that it threatens to distract from the rest of the Enquirer's rich history. The relatively brief segments involving Trump will leave an audience looking to get its fix of Trump history unsatisfied.

Given the sprawling nature of the subject material, it is easy to fault the documentary for not delving beneath the surface of many of its subjects. But it is at its strongest when examining the sordid underbelly of the backroom deals and ethical shortcuts Enquirer staff took to get scoops. "The public didn't really think that the National Enquirer had a point of view. They thought the Enquirer's point of view was, ‘Cover everybody. Hold truth to power,'" Keith Kelly, media columnist for the New York Post, says. "But I don't think people expected them to be burying stories as part of their political agenda. The public was in a sense deceived into not seeing the point of view that was driving a lot of the agenda." A wide array of figures from Bob Hope to Bill Cosby to Arnold Schwarzenegger are implicated in the documentary’s exploration of the ways the Enquirer chose its targets.

Scandalous's examination of the National Enquirer's history reveals a publication that thrived on American decadence. The documentary is a fleeting glimpse into a past culture dominated by celebrity and gossip becoming news. Given the current circumstances, however, viewers can be forgiven for feeling a bit nostalgic. 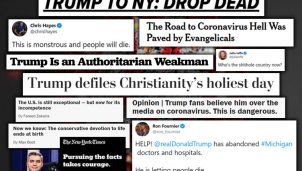 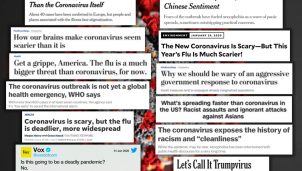