Two illegal immigrants have been arrested for their alleged role in the deaths of more than 50 migrants in San Antonio.

Prosecutors filed criminal complaints against two Mexican nationals on Tuesday evening in the U.S. District Court for the Western District of Texas, charging the men with illegal possession of a firearm "by an alien illegally in the United States." The two men first entered the country on a travel visa but never returned to Mexico following its expiration.

Police arrested the men following an investigation into the registration of the semi-truck containing dozens of migrants, most of whom died from dehydration and exhaustion and were found by a nearby pedestrian. At least 51 of the migrants found in the truck have died—the worst migrant death incident ever recorded in the United States.

The new details related to deaths of the migrants highlight how cartel-connected smugglers have been emboldened amid the worst immigration crisis in U.S. history. Law enforcement and immigration experts say the sheer number of migrants attempting to enter the country has led to more callousness by smugglers, who increasingly view people as commodities who can be discarded.

"All were the apparent victims of human smugglers indifferent to the well-being of human life. The South Texas heat is brutal this time of year, especially given the recent record-high temperatures," U.S. attorney Ashley Hoff said in a statement.  "We will continue to work with the Homeland Security Investigations and the local responders to identify and bring those who were responsible for this tragedy to justice."

Both of the men arrested admitted to illegally owning the firearms, which included an assault-style rifle, multiple handguns, and a shotgun. The two men also admitted to being in the United States illegally.

A third man, whom law enforcement say is a U.S. citizen, has also been detained. What roles the men played in the incident remain unclear.

If found guilty, the two men face up to 10 years in prison for the weapons-related charges.

Over 300 Illegal Haitian Migrants Detained Trying to Sail to U.S. 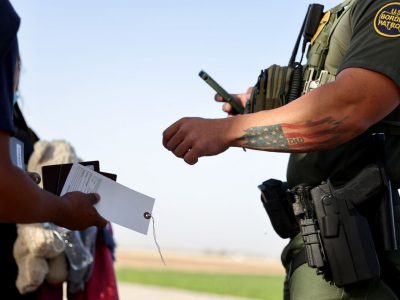 Men Behind ‘Potential Massacre’ in Virginia Were Illegal Immigrants