Florida’s DeSantis offers one possibility for the party’s future

Republicans in search of a promising politician capable of assembling a post-Trump coalition need look no further than Florida governor Ron DeSantis.

A pugnacious populist by disposition, DeSantis has demonstrated that he has real governing chops. His handling of the coronavirus pandemic under the glare of a relentlessly hostile media is a case study in the benefits of competent conservative governance—and one that is likely to serve as the basis for his reelection bid next year.

Florida’s large elderly population should have made it disproportionately susceptible to the virus, but its infection rate per 100,000 residents is in the middle of the pack, according to data from the Centers for Disease Control. DeSantis trained his attention on nursing homes early, avoiding a Cuomo-style disaster; he resisted sweeping lockdowns, deferring instead to local authorities; and he has kept the state’s schools open.

"Florida schools are open, and every parent has the right to send their kids to school for in-person instruction," he said in a Monday tweet. "Those who insist on keeping the schoolhouse doors closed are ignoring evidence and placing special interests ahead of the best interests of children and families."

The governor is right to think that good policy is good politics, and the mainstream media is already sounding the alarm about how Republicans like him are planning to "weaponize" distraught parents against the Democrats. We hope so.

While DeSantis beat the disgraced Andrew Gillum in their 2018 matchup, notching a win by less than half a percentage point, recent GOP polling has his approval rating at a whopping 88 percent, according to Politico’s Marc Caputo. That’s higher than former president Donald Trump’s approval in the state.

Conservatives outside of the Sunshine State are taking notice. Managing the pandemic, DeSantis has emphasized the importance of keeping the economy going.

The result has been a Florida boom—restaurants, retail, and financial services are all flocking to the Sunshine State. And those new Florida voters will be getting the representation they deserve as redistricting is expected to add two seats to Florida’s congressional delegation with lines to be drawn by the state’s Republican legislature.

The governor has also become a regular on Tucker Carlson’s Fox News program and made a cameo earlier this month as a cohost of Fox & Friends, where rank-and-file GOP voters are getting to know him.

The future of the Republican Party will be the subject of heated debate in the coming years. The Florida governor is showing us one attractive possibility. 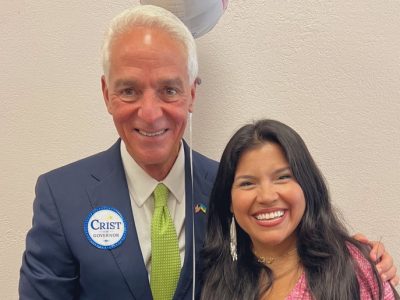