Hadid's more famous girlfriend and sisters under fire for anti-Semitism

Celebrity model Anwar Hadid said he wanted Israeli soldiers "erased from the planet" in a series of anti-Semitic messages obtained by the Washington Free Beacon.

Hadid, best known as the boyfriend of British singer Dua Lipa and younger brother of models Gigi and Bella Hadid, sent several private messages to an Israeli woman in 2018, including one calling for the death of all members of the Israel Defense Forces. "I don't give a fuck to know about the IDF lady," Hadid wrote to Taylor Amrani, who served in the IDF. "Its [sic] the last thing I care about I wish them all to be erased from the planet."

The messages come as Hadid's girlfriend Dua Lipa and two sisters defend themselves from charges of anti-Semitism leveled in a full-page ad in the New York Times. All three have used their massive social media followings to attack Israel as it was bombarded with rockets from terrorist group Hamas. Bella Hadid attracted a response from the Israeli government when she posted a video to her millions of followers of herself at a pro-Palestinian rally chanting, "From the river to the sea, Palestine will be free," a call used by those who want to eliminate Israel entirely. Anwar Hadid has accused Israel of "apartheid."

Amrani shared her correspondence with Hadid in a series of TikTok posts this week. She says she began the July 2018 conversation after he made "really terrible" comments that demonized the IDF, and was hopeful to educate him with information from the other side. Amrani shared screenshots of the messages with the Free Beacon. 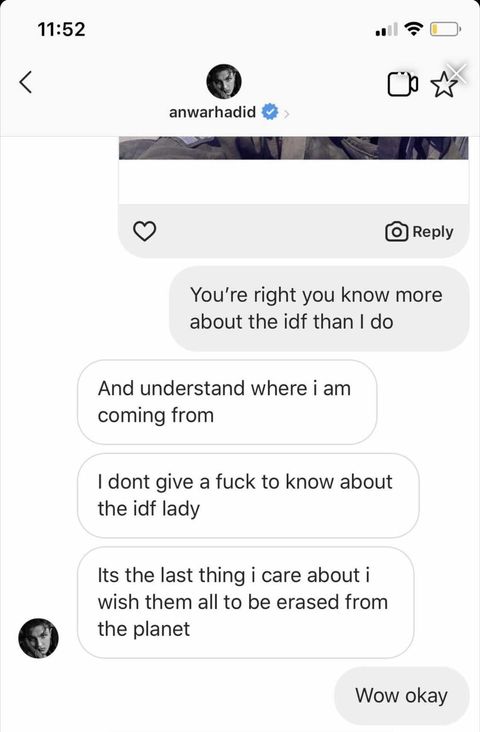 In other messages, Hadid showed disregard for Israeli life and a general misunderstanding of issues at play. When showed a picture of a 13-year-old Israeli girl who was stabbed to death in her bedroom by Palestinian terrorists, Hadid responded, "at least she had a home to sleep in." Hadid also told Amrani that he believed Chaim Weizmann, Israel's first president who died in 1952, remained in charge of Israel.

IMG Models, which represents Anwar Hadid as well as both of his model sisters, did not respond to a request for comment.

Hadid posted an apparent response to his messages with Amrani in an Instagram story that attempted to walk back his comment that all IDF soldiers should be "erased from the planet."

"Most Israeli citizens at some point are considered IDF soldiers due to mandatory military service," he wrote on his Instagram story. "My words are not to be used to generalize Jewish people with IDF soldiers and the horrific acts that some have carried out."

Dua Lipa, the British pop star who has dated Hadid since 2019, attracted attention in 2020 when she shared an Instagram post by director Vin Arfuso that accused Israel of human rights violations. Hadid, who traveled with Arfuso to Israel to film a music video on Palestinian struggles, introduced Arfuso and Dua Lipa.

Arfuso's now-deleted post claimed, without evidence, that Israeli soldiers were seeking out pregnant Palestinian women so they could kill two people with one bullet. The post further claimed that terrorist group Hamas was created by the United States and Israel to create an excuse for "decades worth of occupation, oppression, ethnic cleansing, and MURDER."

When the next synagogue shooter googles "Zionist temples" and "fake Jews" we will remember your part. pic.twitter.com/PO6Zw2LgmQ

Arfuso has since posted a picture of him alongside Hadid joking about how criticism of his posts attacking Israel would not stop him. It is unclear why Arfuso deleted his post.

Cities across the world have seen a sharp increase in anti-Semitic hate crimes. In New York City, where Anwar Hadid and Dua Lipa currently reside, police have allocated extra resources to Jewish neighborhoods to stop attacks on Jews.