"Shame they aren't noticing the Trump Hotel which costs more and has a more problematic clientele," she responded to a tweet noting the vandalism of the Hay-Adams, a luxury hotel near the White House.

The Trump Hotel, also located near the White House, is a popular hangout spot for Trump administration members and allies. Formerly the Old Post Office and Clock Tower, Donald Trump developed the property into a hotel and opened it in 2016.

Shame they aren’t noticing the Trump Hotel which costs more and has a more problematic clientele.

Eisele, an adjunct professor at Georgetown since 1999, is a former editor of NPR's Morning Edition and All Things Considered. She said in another tweet that she believed white supremacists were responsible for the violent uprising in the nation's capital, and she jokingly said she was not a good "ally" of the protesters because she hoped they would leave the Hay-Adams alone. Eisele wants to "live in that hotel," she wrote.

But who is doing this? Opportunistic white supremacists is my bet.

Near, apparently alley. My favorite place in all DC and if that makes me a bad ally, so be it. I want to live in that hotel.

Washington is one of dozens of U.S. cities this week to see civil unrest stemming from the death of George Floyd in Minneapolis police custody. Angry protesters smashed windows and set fires Saturday night, and Secret Service agents repelled demonstrators lobbing projectiles at the White House. 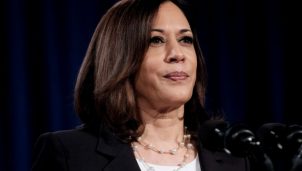 Harris: Biden and I ‘Would Never Condone Violence or Destruction of Property’

Decision Day For Civil War Between Far Left and Establishment