A Fortune 500 roofing company celebrated International Women's Day by hosting a talk from a transgender activist who attacked Christians over their "bigotry."

Owens Corning, headquartered in Toledo, Ohio, held a company-wide meeting on Tuesday that included a talk from Paula Stone Williams—an influential evangelical pastor turned transgender activist. An individual who viewed her remarks to the construction company told the Washington Free Beacon that Williams said American Christians are the root of anti-trans bigotry. The International Women's Day conversation also featured discussion of the lack of attention paid to nonbinary people in the workplace.

Williams served for two decades as the president of the Orchard Group, a Christian organization that builds churches around the country. Williams was pushed out of the organization after "coming out" at age 60 as a woman and went on to build a following as a transgender  activist through TED talk appearances and by serving as pastor of a nondenominational church. Williams published a book last year that details the transition, As a Woman: What I Learned About Power, Sex, and the Patriarchy After I Transitioned.

Williams also works as a pastoral counselor and told Owens Corning employees that clients say Williams has become "a better therapist as a woman than you were as a man."

After the talk, Owens Corning posted about Williams's speech on Facebook, saying it left employees "feeling energized about their futures as professional women." 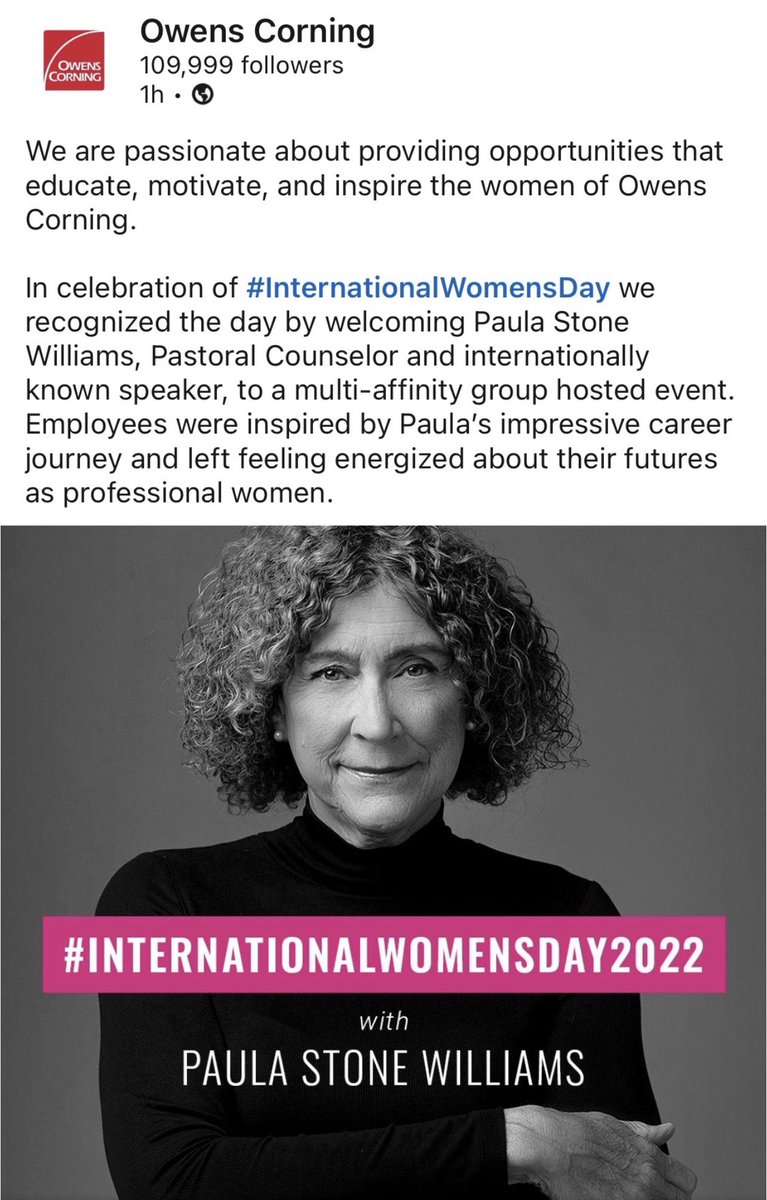 Neither Owens Corning nor Williams responded to requests for comment.

Debates over womanhood and transgenderism have received extensive national coverage in recent months. Lia Thomas set Ivy League swimming records after switching from the men's team to the women's team—a story that went viral in both political and sports media. Dozens of states have proposed bills this year on trans issues such as women's sports, bathroom access, and hormone therapy for minors.

Corporations have used LGBT issues in recent years to push products such as shoes and beer.

International Women's Day, which is celebrated on March 8, began in the Soviet Union after women gained suffrage in the country. It grew popular with socialist groups around the world and was later recognized by the United Nations in 1977.