Change.org deleted a petition that calls on Cambridge University to fire a professor who declared that "white lives don't matter" after the petition gained traction and accumulated more than 20,000 signatures.

Cambridge English professor Priyamvada Gopal tweeted, "White Lives Don't Matter. As white lives," on June 23, sparking backlash from students, alumni, and even Twitter, which removed the professor's tweet. Students created a Change.org petition calling on Cambridge to fire the professor for her remarks. The petition garnered more than 20,000 signatures but was removed by the website—which has often served as a major driver for targeting people who are tied to viral controversies. A Change.org spokesman claimed the petition was a form of "bullying" because it singled out Gopal. 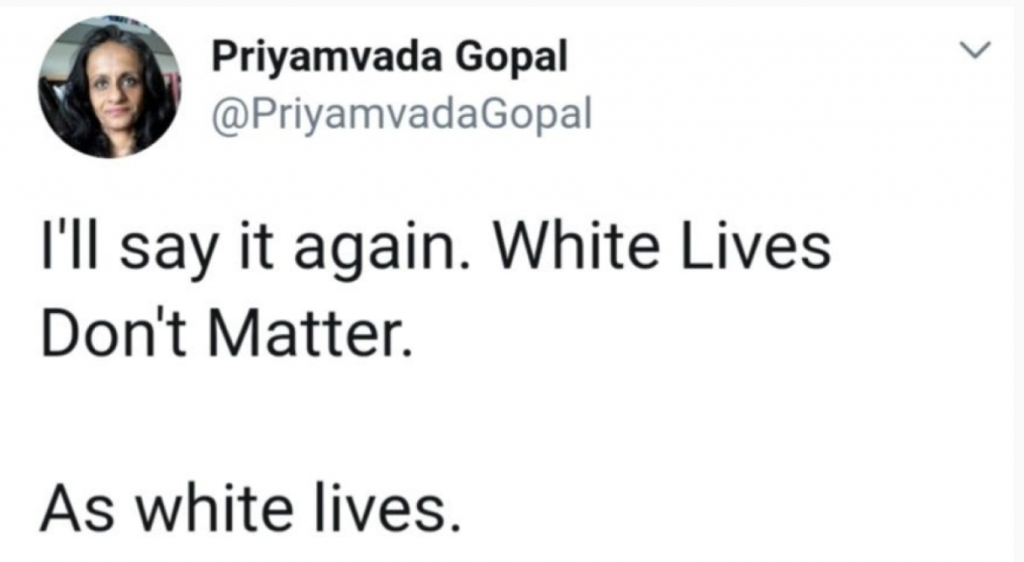 "This petition was removed for being in breach of our bullying and harassment policy," the spokesman said.

The spokesman declined to say whether the site plans to erase other petitions that attempt to get others fired.

Despite the controversy, Gopal doubled down on her remarks in an interview with the Washington Free Beacon.

"I would also like to make clear I stand by my tweets, now deleted by Twitter, not me," Gopal said. "They were very clearly speaking to a structure and ideology, not about people. My Tweet said whiteness is not special, not a criterion for making lives matter. I stand by that."

The day after Gopal's tweet, Cambridge issued a statement claiming the university "defends the right of its academics to express their own lawful opinions" but has not commented further on Gopal's tweet or the professor's employment status. The university did not respond to a request for comment. Gopal told the Free Beacon she does not believe she will be terminated given her right to freedom of speech.

"I don't think [my employment] is in question at this point as my employer is clear and has said publicly that they stand by my right to freedom of speech within the law. My tweet did not violate the law in any way as the police have also publicly stated," Gopal said. "My aim was to get us to think and debate about the difference between White Lives Matter and Black Lives Matter. They are not the same thing at this historical moment."

"I do not agree with firing people because they hold certain opinions, the problem is the evident double standard. Cambridge University has had no qualms in the past firing people … the difference was simply that they were conservative academics," Webb said. "In the United Kingdom, it is increasingly common for people to lose their jobs for expressing ‘heretical' opinions. But left-wing academics appear to be immune from this threat, no matter how horrifying or hateful their statements are."

In 2019, Cambridge fired conservative scholar Noah Carl after 500 activist colleagues signed a letter dubbing his research "racist pseudoscience" and calling on the university to fire him. The university also rescinded a visiting fellowship offer to Dr. Jordan Peterson, a conservative Canadian scholar, after activists complained about his stance on political correctness.

Gopal reiterated that she would repost her tweet in comments to the Free Beacon.

Gopal's anti-white statements predate the anti-police protests that have rocked the country since the death of George Floyd at the hands of a white Minneapolis police officer. In February 2019, Gopal wrote, "I resist urges to kneecap white men every day. So, no I am the hero." The professor's biography says her main teaching and research interests are in gender, feminism, Marxism, and critical race studies. She has since locked her Twitter account.

Gopal does not see this double standard. After doubling down on her comments, she threatened to sue the Free Beacon for quoting her as saying "white lives don't matter."

"That is not what I said but feel free to subject yourself to a lawsuit," Gopal said. "I am sending you this so that the legal record will show you were warned and given the correct quotation." The quotation Gopal prefers is "white lives don't matter. As white lives."

The professor claims that she has received death threats for her comments and believes white supremacist groups lobbied Twitter to have her tweet removed.

"I think Twitter does sometimes get it wrong and this was one such instance. My mistake was to not appeal—thought they gave me the option—and to simply agree to the deletion [of the tweet] in order to get back on Twitter and monitor the death threats," Gopal said. "I think they were responding to a concerted effort to censor me undertaken by white supremacist groups. They should certainly be more thoughtful and attentive to what is actually being said."