A left-wing organization has targeted a moderate Democratic lawmaker for suggesting it is time to compromise on entitlement programs, muddying the narrative of both the media and Democratic party operatives about who is to blame for the failure of deficit reduction talks.

Washington Post blogger Greg Sargent reported Monday that CREDO Action, a left-wing advocacy group, is spearheading a campaign against House Minority Whip Steny Hoyer (D., Md.) over his recent willingness to negotiate with Republicans over the deficit. The group was planning to inundate Hoyer’s office with calls Monday urging the congressman not to sign off on any reforms to Medicare, Medicaid, or Social Security.

"Working with Republicans on a deal which will preemptively cave on cuts to Social Security, Medicare, and Medicaid is not acceptable from the second most powerful Democratic Leader in the House of Representatives," the group wrote in an email to supporters.

As an alternative to reforming the biggest drivers of the national debt, CREDO suggested "rolling back the Bush tax cuts on the wealthiest Americans and bringing our troops home from the disastrous and costly occupation of Afghanistan."

Sargent explains the rationale behind the campaign:

Liberals worry that Hoyer’s effort—which he unveiled in front of the "centrist" group Third Way—signals the possibility that Dems could support significant cuts to Medicare and Social Security, which could undermine the social safety net and weaken the Dems’ ability to take back the House, since a sharp contrast on Medicare will be central to the Dem message. …

In an interview with me last week, [House Minority Leader Nancy] Pelosi said the Dem message should be simple—Republicans … want to end the Medicare guarantee, and Democrats don’t. She warned that Dems should not get lured too deeply into deficit-reduction negotiating over Medicare, lest it muddle the contrast between the two parties.

It is no secret that Democrats are planning to run a 2012 campaign focused on vilifying Republican efforts to reform Medicare and other federal entitlements. Conventional wisdom in the media holds that the Republican Party’s refusal to support a more than $1 trillion dollar tax increase is the primary impediment to a so-called "grand bargain" on deficit reduction between the two parties.

"Last summer, Mr. Obama and Speaker John A. Boehner nearly clinched a ‘grand bargain’ reducing deficits up to $3 trillion over 10 years, but the deal fell apart over taxing the wealthy—an issue that continues to divide the parties," wrote Jackie Calmes, White House reporter for the New York Times, on Feb. 27, 2012.

The narrative has arisen from White House press leaks and assertions from President Obama that a comprehensive deal—including tax increases as well as meaningful reforms to Medicare and Medicaid, which the president has said are "the single biggest contributor to our long-term deficit"—was actually on the table. Republicans deny the claim.

"The only reason this balanced approach isn’t on its way to becoming law right now is because a significant number of Republicans in Congress are insisting on a different approach—a cuts-only approach," Obama said in July 25, 2011, address to the nation.

Speaker Boehner told a different story. "A deal was never reached and was never really close," he wrote in a letter to House Republicans. "The president is emphatic that taxes have to be raised. The president is adamant that we cannot make fundamental changes to our entitlement programs."

Republicans argue, and most experts agree, that federal entitlement programs like Medicare, Medicaid, and Social Security require significant reform if they are to remain solvent for future generations. House Budget Committee chairman Paul Ryan (R., Wis.) authored a fiscal year 2012 budget that included a sweeping overhaul of Medicare and Medicaid, as well as a framework to reform Social Security.

Democrats, meanwhile, have accused Republicans of wanting to "balance the budget on the backs of working families, the elderly, the sick, the children, and the poor." However, they have failed to offer any alternatives to GOP proposals.

Sen. Chuck Schumer (D., N.Y.), who runs the Senate Democrats’ political messaging operation, has argued that putting forward a competing proposal is "not the point." House Minority Leader Nancy Pelosi (D., Calif.) told Sargent in a May 2011 interview, "We have a plan; it’s called Medicare."

Democratic unwillingness to confront the issue comes despite repeated warning from experts that doing nothing to shore up federal entitlement programs would have catastrophic consequences for the fiscal health of the country.

Data from the Congressional Budget Office illustrates the central role of entitlement spending as it relates to the national debt.

According to the White House’s Office of Management and Budget, current policy puts the country on a path to exploding national debt. 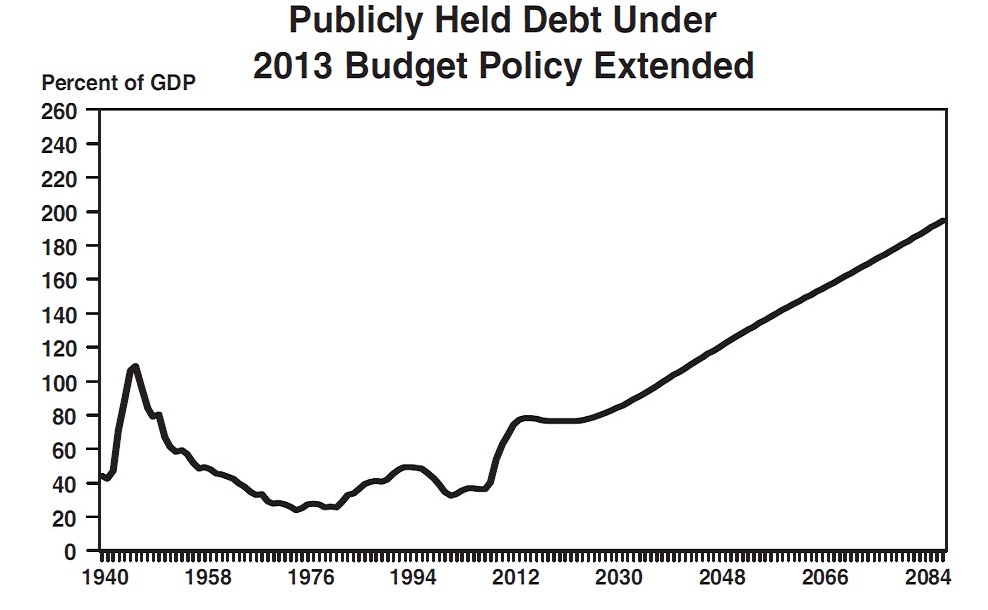 Treasury Secretary Timothy Geithner has admitted that even if President Obama’s most recent budget resolution—the most expensive in United States history—were to be enacted, the country would still face "unsustainable commitments" in Medicare and Medicaid. He has also warned that lawmakers need to act "sooner rather than later" to reform the programs.

One Democrat, Sen. Ron Wyden (D., Ore.), has broken ranks with his colleagues on the issue of entitlement reform. He recently teamed up with Ryan in an effort to advance a bipartisan plan to save Medicare from insolvency.

Wyden’s efforts were not well received by his fellow Democrats, however. "What they’re trying to do is put lipstick on a pig," Pelosi said.

White House press secretary Jay Carney said the plan would "end Medicare as we know it."

Some Democrats argue that there is no need to reform Medicare because the new health care law contains a provision that essentially solves the problem. The Affordable Care Act calls for the creation of an Independent Payment Advisory Board (IPAB)—a 15-member panel of political appointees tasked with keeping Medicare costs below a set rate of inflation.

However, a bipartisan array of IPAB opponents charge that the board will be forced to ration care in order to meet its goals, and will transfer decision-making power away from elected officials and into the hands of government bureaucrats.

The House Energy and Commerce Committee voted to repeal IPAB Tuesday morning. The repeal is expected to pass with bipartisan support once it reaches the floor of the House.

When it comes to Social Security, Democrats have been just as reluctant. Stephen C. Goss, chief actuary for the Social Security Administration, recently warned members of the House Budget Committee of the steep cuts that await future beneficiaries unless Congress takes action to shore up the program’s finances.

"Our trustees and everybody who speaks on this has opined extensively about the value of acting sooner rather than later, so that we can have gradual changes phased in and we have more options if we act relatively soon," Goss said to Congress.

Despite these warnings, however, top Democrats are content to wait it out.

"Let’s worry about Social Security when it’s a problem," Senate Majority Leader Harry Reid (D., Nev.) told a group of activists gathered at the Capitol in October 2011. "Today, it is not a problem."