How the DEA's newest division is fighting the drug epidemic

Agents seized 40 firearms, "significant" quantities of heroin and fentanyl, and more than a million dollars in cash last week while arresting 93 in Operation Safe Haven, the latest of several successful busts by the Drug Enforcement Administration's newest division.

Based out of Louisville, Kentucky, the division is responsible for DEA operations in much of Appalachia, covering the states of Kentucky, West Virginia, and Tennessee. As Safe Haven was taking place, the Free Beacon spent several days with the division's leaders, learning about the unique challenges they face and how responses like Safe Haven come together. 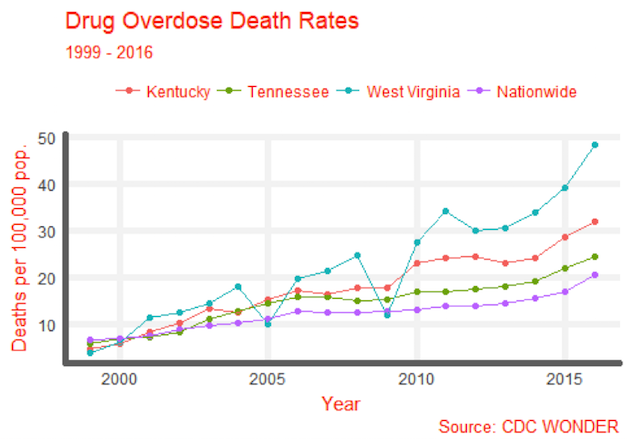 An increase in overdose deaths across the region is in large part driven by the nationwide crisis of opioid overdose deaths. Opioids are the "elephant in the room," according to D. Christopher Evans, Special Agent in Charge of the division. Officials administered 3,500 hits of Narcan, a fast-acting overdose treatment, in the city of Louisville alone last year, a sign of how bad the crisis has gotten. 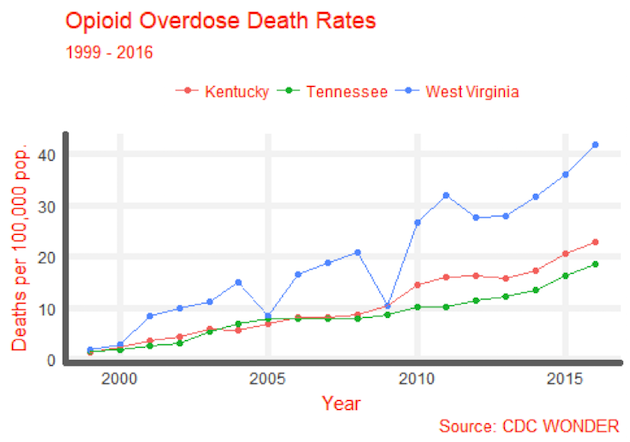 The flood of opioids is composed of more than one threat. Prescription drugs are a big problem in the eastern portion of the region, where Kentucky and West Virginia meet along the I-95 corridor. Years ago, diversion officers told the Free Beacon, these drugs came up in droves from Florida. Since a crackdown there, people looking for their Oxy fix have turned north, shuttling back and forth from Detroit—a problem exacerbated by abuse of both private insurance and Medicaid.

At the same time, heroin is spreading throughout the region, concentrating in urban areas. Regular heroin has been rendered even deadlier by the addition of synthetic fentanyl, which is about ten times stronger. Fentanyl only began appearing recently—the first overdose was in 2016, in Lexington; then another across the border, in Cincinnati; then, Resident Agent in Charge Jim Scott said, it was "everywhere."

Now, 80 percent of overdoses involve fentanyl. What is more, Scott said, opioid users will flock to where an overdose has been reported, because they know the "dose" is good.

Opioids aren't the only problem: methamphetamine has come roaring back, especially in the area west of Bowling Green. Every DEA official to whom the Free Beacon spoke agreed that meth was a growing threat to the region: Assistant Special Agent in Charge Daniel Dodds claimed meth was, "as much or more of a problem as it's ever been." 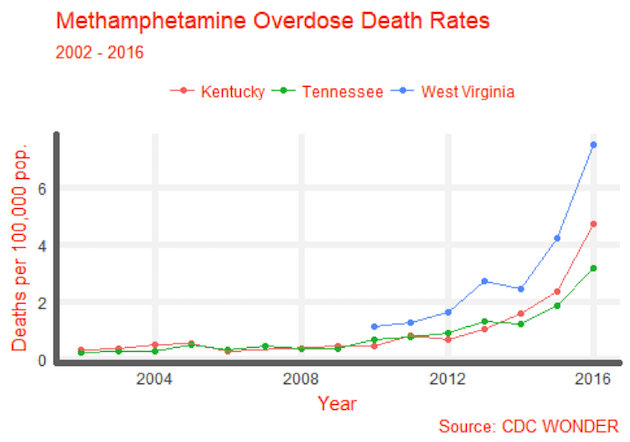 Meth, heroin, and other drugs all flow through one common point: Mexico. The Louisville metro area is in general one to three degrees of separation from Mexican drug cartels. Drugs are shipped in bulk on tractor trailers, by air, in rental cars, and even by mail. When they reach Appalachia, often by way of Houston or Atlanta, they pass through local dealers, who are often illegal immigrants.

With all these drugs comes violence. Gangs aren't a huge threat in the Louisville division yet—"wannabe" was the word used to describe those groups who are there. But analysis from the Appalachian High Intensity Drug Trafficking Area (a federal group which tracks drug trends in the region) shows that drug-associated violence was on the rise in 2016. That trend continued in 2017, a HIDTA analyst told the Free Beacon.

So how does the DEA fight back? According to SAC Evans, the answer is slowly but steadily. He, like the other officials the Free Beacon spoke to, believes the drug epidemic will, with their help, eventually recede.

"This is a large vessel, and it takes time to turn it," he said.

Still, it's important to realize that the Louisville division is simply not that big. The central office covers just one floor of an unassuming federal office block in Louisville. SAC Evans estimated that about 100 agents work under him, covering thirteen offices in three states. Their work is supplemented by about 140 "task force officers," local law enforcement who do drug enforcement work and are partially on the DEA payroll.

Agents therefore must pursue every angle, from chasing tips to more advanced investigation. They always aim for the top of any drug operation: "cutting off the head of the snake," as RAC Scott puts it.

Technology is key—wiretaps are still heavily used, with about 12,000 last year across the whole DEA. Drug dealers are getting smarter too, though: Peter Alderman, the research specialist with HIDTA, works in part to provide tech support to agents dealing with gangs who use cell phones and the dark web to sell their wares.

"We have to adapt the same as anybody else," Alderman said.

The DEA's mission isn't just busting heads: It's also responsible for managing the "closed system" of legitimate drug distribution, setting quotas for pharmaceutical companies producing controlled substances, then following them all the way to pharmacies and consumers. When the drugs get diverted—like the wave of prescription opioids sweeping into the Louisville region from the north—it's the DEA's job to crack down.

Diversion can be approached in a number of ways, according to Martin Redd, the Louisville Division's diversion program manager. The DEA can directly cut the number of drugs being produced—it's done so for a number of opioids over the past few years. It can also bring civil actions against pharmacies or distributors: It has even charged Google, according to Redd, when the search engine giant was being incautious in advertising for illicit pharmacies.

Then there's the strange hybrid that is "Tactical Diversion," which covers investigations of doctors and pharmacies whose diversion rises to the criminal level. The Louisville region's Tactical Diversion Squad is based out of Lexington, where around 15 people cover 30 or 40 cases at a time. Tactical Diversion isn't new, but it's perhaps uniquely suited to the opioid era, when the line between doctor and drug dealer has grown increasingly blurry.

It is not hard to imagine that the seemingly unending wave of drugs faced by the DEA would be disheartening. But DEA agents—at least, those who spoke to the Free Beacon—all seem to really like their jobs. High-ranking agents have routinely been in for decades—allegedly, one 60-year-old field agent has deferred retirement three times (agents are usually required to retire at 57) to stay on the streets.

When asked why, one person pointed to the size of the agency: "big enough to get a lot done, but small enough to get to know people." In ASAC Dodd's view, there's another component. To many agents, he said, the DEA is a "calling," something that people know they want to work for from high school on.

"Most of us are idealists," Dodd said. "We believe drugs are bad."