Former White House press secretary and current Obama re-election campaign consultant Robert Gibbs will speak at the 2012 SALT Conference, an annual meeting of some of the world’s most powerful hedge fund managers, investors, and political figures.

The conference, held in Las Vegas at the luxurious Bellagio resort this May and hosted by SkyBridge Capital, is a who’s-who of big money and big politics. Companies that participated in the 2011 conference included Goldman Sachs, J.P. Morgan, the New York Times, Bank Of America/Merrill Lynch, and the Carlyle Group.

The conference has been called a "schmoozefest for hedge fund managers." SkyBridge Capital brags that at its last conference it had "a hundred billion dollars worth of managers sitting up on a panel."

The event has also been noted for its excess. "After expensive dinners at the city’s finest restaurants, attendees fanned out across the Las Vegas Strip to partake in late-night partying in something akin to a hedge fund spring break," the New York Times wrote.

Gibbs was White House press secretary from 2009 until February 2011, when he left the administration. He returned to Obama’s re-election campaign as a roving surrogate and strategist in January.

Gibbs is not the first Obama staffer to speak at the conference. Former Senior Adviser David Axelrod spoke at a closed-to-the-press event at the conference in 2011. It’s not clear how much Axelrod was paid. President George W. Bush was paid $175,000 for an off-the-record dinner.

Obama campaign bundler and disgraced MF Global CEO Jon Corzine, whom Obama has called "a great friend" and "ally," also spoke at the 2011 conference. Corzine joked that he "went out and got drunk" when he learned of the Lehman Brothers collapse in 2008. He was the governor of New Jersey at the time.

According to the conference agenda, Gibbs will be speaking with Karl Rove, a former deputy chief of staff and senior advisor to president George W. Bush, at a session titled "Election 2012: A White House Insiders' Perspectives."

Relations between the administration and Wall Street chilled since Obama spent much of his first term railing against "fat cat bankers."

SkyBridge Capital founder Anthony Scaramucci, addressing Obama at a 2010 town hall meeting, said the financial sector "felt like a piñata. "We certainly feel like we’ve been whacked with a stick," he said.

Scaramucci, who contributed $4,600 to Obama in 2008 according to the Center for Responsive Politics, now supports GOP presidential candidate Mitt Romney.

Neither the Harry Walker Agency, the bureau which represents Gibbs, nor the Obama re-election campaign returned calls for comment. 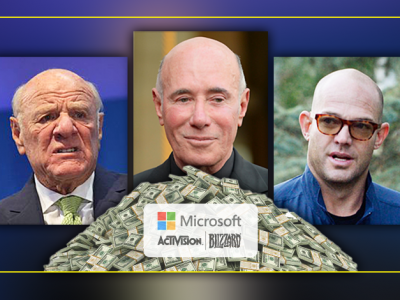 These Democratic Megadonors Made a $108 Million ‘Lucky Bet’ on Wall Street. Now the Feds Are Investigating.