Death row populations remained high and numbers of executions remained low as of the end of 2016, a newly released report from the Bureau of Justice Statistics shows.

The Death Penalty Information Center already preserves up-to-date lists of executions conducted in the United States, with more recent information available than the BJS has now made available. However, the new report provides vital and not regularly available information on the composition of America's death rows and their shifting composition.

The two-year lag, standard for similar BJS reports, is attributable to time it takes the bureau to acquire, compile, and analyze the relevant data from the 50 state correctional systems.

At the end of 2016, there were just under 3,000 people awaiting execution in the 32 states where the practice is still legal. This was a 58-person decline from year-end 2015. That change was the product of 32 new prisoners facing a death sentence, 70 removed from death row because of an overturned sentence or conviction, and 20 actually executed.

The high ratio of people awaiting execution to those actually executed in a given year is a well-documented phenomenon. It is driven in part by the length of appeals: according to the BJS, the average age on death row is 49, while the average age at admission is 38. The capital appeals process has become so protracted that the Supreme Court has found itself forced to take up the case of a man who has been on death row so long that, 30 years later, he has developed dementia and cannot remember his crime.

This situation is further exacerbated by the challenge of acquiring execution drugs for use in lethal injection. After strategic lobbying of pharmaceutical companies by death penalty abolitionist groups, states have been unable to acquire historically used drugs such as thiopental or pentobarbital. They have thus opted for more controversial chemicals, such as midazolam, or implemented totally new methods like inert gas hypoxia.

The overwhelming majority of prisoners on death row are at the state level; just 58 were facing capital punishment at the federal level at the end of 2016. Among those on state death rows, California (26 percent), Florida (14 percent), and Texas (9 percent) account for more than half of the absolute death row population. Controlling for population, Nevada and Alabama lead the nation in per capita death row size, while Texas, California, and Florida become less prominent. 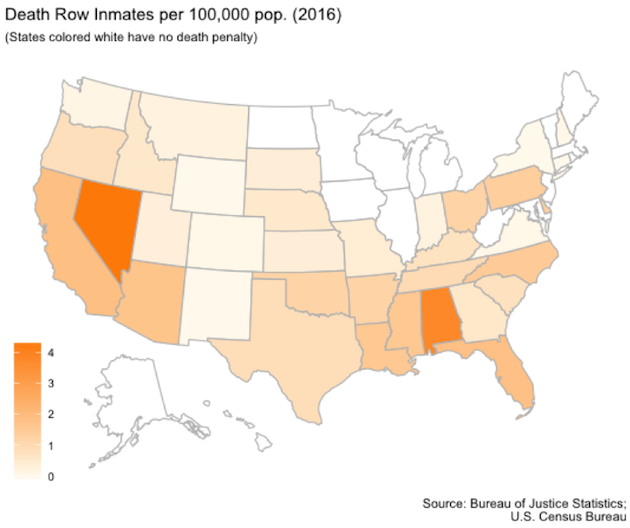 The size of death rows does not necessarily relate to lethality. In California, for example, the last time an execution actually took place was 2006. The 20 executions in 2016 were distributed among just five states, with Georgia (9) and Texas (7) combined accounting for 80 percent of those. 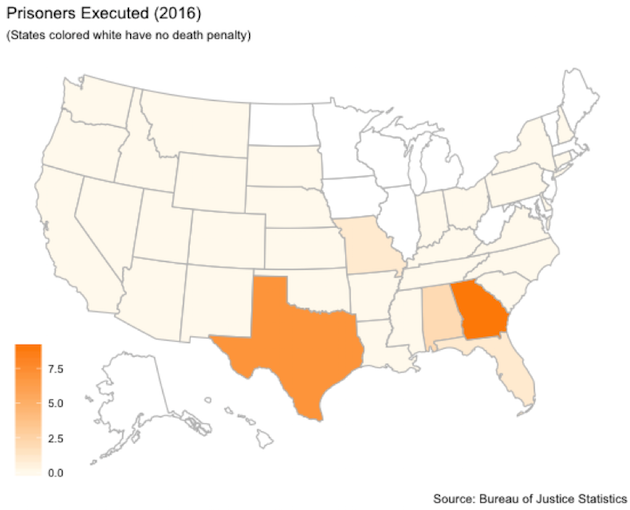 White and black offenders accounted for 97.7 percent of all offenders on death row in 2016, with whites (55.4 percent) outnumbering blacks (42.3 percent) in the total. These numbers are out of proportion to the population of each ethnic group: black Americans make up about 13 percent of the general population.

However, the ethnic composition of death rows is not necessarily out of proportion with capital homicide offense rates. A recent analysis of Pennsylvania executions added to numerous other studies concluding that there was an equal likelihood of being executed regardless of race, given known offense patterns. However, the same studies routinely indicate that an individual is more likely to be executed if his victim is white, rather than black.

The majority of death row inmates, 55.7 percent, are unmarried. About equal numbers are married and divorced; 3.5 percent are widowed.