The attack on Pittsburgh's Tree of Life synagogue was the worst attack on Jews in American history. It reignited the debate over how to deal with such mass-casualty attacks, especially in the Jewish community.

Progressive Jewish groups came out in favor of gun control in the days that followed. The Religious Action Center of Reform Judaism called for "commonsense" restrictions. The Jewish Reconstructionist Communities endorsed a "ban on assault weapons." Rep. Ted Deutch (D., Fla.), a Jewish congressman whose district covers Parkland, where a school shooting killed 17 in February, stressed that "gun safety is on the ballot" Tuesday.

Pro-gun Jews, including a number who spoke with the Washington Free Beacon, took a different approach, with many advocating for those in the Jewish community to arm and train themselves.

Tomer Israeli, a former chief security officer in the Israeli Shin Bet and owner of the Israeli Tactical School, said the answer to anti-Semitic attacks is similar to that of other violent attacks: training and preparation.

"The best tactics should be prevention with countersurveillance skills side by side with firearms skills around sensitive locations. In simple words, deter, detect, and intercept," he said.

The Israeli Tactical School he founded trains military members, law enforcement officers, and even civilians across the United States in how to respond to active shooter situations. The school even offers a specific program for how to protect synagogues. Tomer believes programs like his are key to preventing future anti-Semitic attacks.

Yali Elkin is the CFO of a small investment fund and member of the Golani Rifle and Pistol Club, a small group largely composed of observant Jews. In the wake of the Parkland attack, he penned an op-ed in the Jewish Link defending gun ownership and armed schools. "Return fire works," he said. "When a shooter hears someone else's gunfire, they have to pause, regroup and shelter. That buys time for first responders, which should mean lives saved."

Elkin described pushback in the Jewish community, but an atmosphere of mutual respect and an openness to changing stances.

"I have personally influenced and persuaded several friends and family members to exercise their Second Amendment rights with no compunction or apologies of any kind," he said. He takes pride in being American and pride in being Jewish. He has raised his children as Orthodox Jews and firearm users. "Just like I've taught my kids about the vital protections of the First Amendment, I teach them the same about the Second," he said.

Given recent events, Elkin argued, "the traditional, borderline superstitious fear of guns many Jews exhibit is a relic of the past." In more observant communities, Elkin expects "Jewish support for gun rights will continue to flourish." 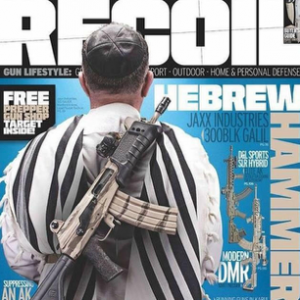 Josh Treiber, a concealed-carry advocate who works and buys kosher food near the Squirrel Hill neighborhood that's home to the Tree of Life synagogue, argues that being armed is the best defense against those who would do harm to Jews but said it can be hard to convince others.

"I have such a difficult time trying to communicate to other Jews that firearms are simply tools that are used for defense (not ‘evil'), that there are bad people in the world that wish us all dead, and that the Torah encourages you to ‘rise up and strike first' someone that wishes to kill you," he said. "It is anathema for so many of the Jewish community that I would consider picking up a firearm, let alone carrying one for self-defense, and being willing to take a life that wished me grave harm. Trying to have this conversation with pacifists and people who bury their head in the sand, refusing to confront the truth and the reality of the world, is incredibly frustrating. These are Jews whose family members survived the Holocaust, yet they will not consider defending themselves against a very similar evil."

"Upon learning of the murders at the synagogue, I cried for those families and for the congregation, but I cried most out of sheer frustration knowing all those lives could have been spared had there been a police officer or congregant [carrying a concealed weapon] to confront the mass murderer the minute he entered the synagogue," he said. "If someone like me had attended services on that day, prepared to take action and defend those praying to g-d, we as a nation would be having a different conversation."

E.B. Dvir is an officer of the Golani Rifle and Pistol Club and the founder of Protexia One, an antiterror security organization staffed by former military and police personnel. An IDF veteran and a former New York Police Department auxiliary officer, Dvir understands the Jewish fear of firearms. "Through the Holocaust," he said, "Jews were always on the wrong side of the muzzle of a gun." To Jews of Europe and their brethren in the United States, "firearms were in the hands of evil people, and firearms were seen as evil." 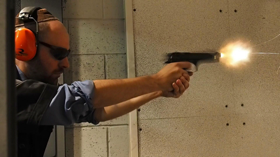 Dvir considers Jewish security essential, even in America. "It used to be that American Jews just thought attacks were a France problem, an Israel problem," he said. That began to change following the 2008 terror attacks in Mumbai, India. In that attack, 10 Pakistani terrorists murdered 166 people and injured 600 more during a November rampage through Mumbai. The terrorists broke into the home of a Chabad couple, emissaries to the city's Jewish community, and murdered them in front of their child. Dvir says the incident prompted increased synagogue security and a rise in private Jewish gun ownership.

Following the Pittsburgh attack, Dvir describes a surge in synagogue security requests. "My phone's been ringing off the hook," he said. He fears, however, that communities will discuss and have meetings about securing synagogues for a few months, until the memory fades. "After a few months people tend to forget, like they did with Mumbai, Toulouse and dozens of other attacks against Jewish institutions both abroad and U.S.A. Then things go back to normal, and they're vulnerable again," he said.

Those measures can be expensive. Kesher Israel Georgetown Synagogue in Washington, D.C., sent an email to members last week announcing enhanced security. Avoiding the error of other communities, which enhance security after an attack and then "move back to ‘normal' when the news coverage subsides," Kesher security would be "consistently prioritized."

Kesher would not be training congregants or encouraging private firearm ownership. Instead, the synagogue decided "to increase the law enforcement presence at Kesher." The price tag, however, is steep. "Because this will incur expenses that are not supported by our existing operating budget or incoming grants," congregants learned, "we are initiating a campaign to raise $25,000 for this effort."

According to the Anti-Defamation League, there were 1,986 anti-Semitic incidents in 2017, including one in every state. FBI statistics show Jews are consistently the most targeted religious group in America, despite constituting only some 1 percent of the country. ADL president Jonathan Greenblatt notes that "Anti-Semitism may be the oldest hatred, but it is deeply felt today."

Grant Schmidt is responding to this hatred by taking a medical triage course in Israel, which he intends to bring back to the Philadelphia area. Schmidt is in the process of opening his own firearm studio.

Schmidt, who is not Orthodox, explained that his Jewish "community does not talk about guns. And that's dangerous." Despite he and others having concealed firearms in synagogue, the leadership of the synagogue "does not condone" gun ownership and will not discuss it "for fear of being seen as condoning it." Gun owners in his community, who carry to protect, are afraid of bringing up the issue for fear of provoking an official policy of outright prohibiting firearms.

That situation, Schmidt says, is untenable. "The trust in our synagogue leadership is gone after Pittsburgh." The attack made clear to him that "we need to be our own first responders." He noted that the Pittsburgh attacker used his position inside the synagogue and the presence of civilians inside to his advantage, wounding several police officers in the process. "The truth is that, as much as I am close to police in our area, they are second responders. We have a biblical directive to set watchmen, to be our brother's keeper, and when someone rises up to kill us, we have to rise up and kill them first."

In the past week, Schmidt has seen American Jews "turning to the Constitution, and turning to the Torah, which is what we should be doing in times of crisis." In practical terms, "that takes the form of concealed carry where it's legal. We have to be the change we want to see, we have to depend on ourselves."

David Pollock is an administrator at the Jewish Community Relations Council. He has helped religious leaders of all faiths guard against attacks through active and passive measures, including armed security. "I think that Jews have a tendency to be more paranoid than other identifiable groups," he told New York magazine. "But that's probably because we have reasons to be — historical reasons."

Tim Schmidt, President of the U.S.Concealed Carry Association, told the Free Beacon he doesn't "want people to be paranoid. I want them to be prepared. Preparation and paranoia are not the same thing."

One can hardly fault Jews for that paranoia. Though the attack in Pittsburgh might represent a turning point, violence against Jews has a long history, even in the United States. Lynchings, bombings, shootings, and riots have left bloodstains on a record of Jewish presence in the United States stretching back to the late 1500s.

In August 1790, President George Washington felt compelled to write to the Hebrew Congregation in Newport, R.I. He thanked them for their support and stressed that it was insufficient for Americans to merely "tolerat[e]" their Jewish compatriots. For Washington, "the Government of the United States, which gives to bigotry no sanction, to persecution no assistance requires only that they who live under its protection should demean themselves as good citizens."

In the end, many of those contacted praised firearms, but sounded a similar note: Jews need to go to synagogue and continue to pray.

"The question we must ask in the wake of Pittsburgh," said Rabbi Yaakov Menken, founder of the Coalition for Jewish Values (CJV), is "what can we do better, individually and as a community, to invoke Divine mercy and warrant His protection?"

Rabbi Jeffrey Myers, rabbi of Pittsburgh's Tree of Life synagogue that lost 11 congregants, wrote the same in the wake of the Parkland attack. "I pray that God be with the grieving families in their time of need," Myers wrote in February. "I seek God’s strength to persevere through yet another tragedy. I implore God for wisdom to make the right choices to heal our broken spirits and find solutions toward a better, safer society. Amen."