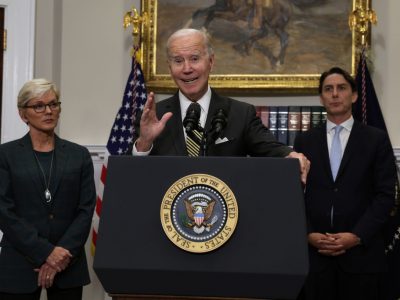 Wyoming Republican Liz Cheney is making coal a centerpiece of her congressional campaign following massive layoffs at two of the largest coal mines in the state that were announced earlier this month.

In an interview with the Washington Free Beacon, Cheney called Wyoming’s coal a national treasure and said that the massive layoffs at the two mines would not only be felt in the immediate communities, but throughout the economy.

'Anybody who is looking at this based on facts can see that coal, and oil and gas as well, are fossil fuels, and in Wyoming are a national treasure," Cheney said. 'And they are a resource that can … be used by the entire nation to become energy independent."

Democratic presidential candidate Hillary Clinton stirred controversy during a CNN town hall in March when she said her environmental regulations would put many coal companies and coal miners out of business.

Cheney has come out strongly against Clinton’s remarks, releasing her own list of pro-coal legislative priorities. Cheney also sent an open invitation to former President Bill Clinton for a face-to-face meeting to discuss Wyoming’s fossil fuels during his recent visit to the state.

The former president did not respond to the invitation, and his campaign stop in Cheyenne last week was met by protesters, including some laid-off coal miners.

'The point that my campaign was making, that I was making was you cannot be supporting this whole set of policies that are fundamentally devastating to the coal industry, devastating to communities all across Wyoming, and then show up here and ask for votes," Cheney said.

Wyoming is the nation’s largest coal-producing state. At the beginning of April, two of its largest coal mines announced they were laying off hundreds of coal miners because of a downturn in the coal market and the Obama administration’s environmental regulations.

Cheney’s legislative priorities include limiting the growth of the federal government and reining in the EPA, with the ultimate goal of dissolving the agency.

Cheney is also calling for a major regulatory overhaul. She would restore congressional oversight to agencies to limit the number of rules they can create without congressional approval.

Calling it an under-discussed issue, Cheney also said switching from foreign oil to coal would strengthen national security. She argued policies put in place by President Obama have made it more difficult for the nation’s electric grid to receive an affordable, reliable supply of fuel.

Cheney also said that the Obama administration’s clean energy mandates require the Department of Defense to receive at least 25 percent of its energy from renewable energy sources. Cheney said the mandate should be repealed and its funds reallocated to rebuilding the military.

'Fundamentally, I believe we are facing a greater and more complex series of the strategic threats internationally and we need to restore our military. We need to rebuild our military so that it can actually carry out defense of the nation in this hugely challenging climate we’re facing and do it by allowing them to focus on what their mission should be, which is defense of the nation," Cheney said. 'Imposing this renewable energy mandate is just ridiculous, damaging, and ought to be repealed."

Cheney said she wanted to build a coalition of coal-producing states, adding that Wyoming’s elected representatives needed to lead the coalition. The coalition’s goal would be to educate the public about coal-powered energy and policies she says target coal and other fossil fuel industries.

'We have got to make sure that we are in a position to end the war [on coal] by putting together a large and effective, dedicated coalition on behalf of fossil fuels," Cheney said.