Most incarcerated state in the union aims to cut 10% of prison pop. within 10 years

America’s most-incarcerated state is taking steps to cut its imprisonment rates, and while a recent mass release of prisoners has provoked controversy, Louisiana state officials remain positive about their role as a model for the nation's move towards sentencing reform.

Louisiana is often cited as the prison capital of the United States, which is in turn the world leader in per capita incarceration. Louisiana first attained that nationwide status in 2005, but data from the DOPSC shows that Louisiana's incarceration rate rose steadily from 1980 onwards, rising from around 370 prisoners per 100,000 Louisianans in 1989 to around 875 per 100,000 in the 2010s (it has since dropped, thanks in part to reforms under the administration of Gov. Bobby Jindal (R.)). 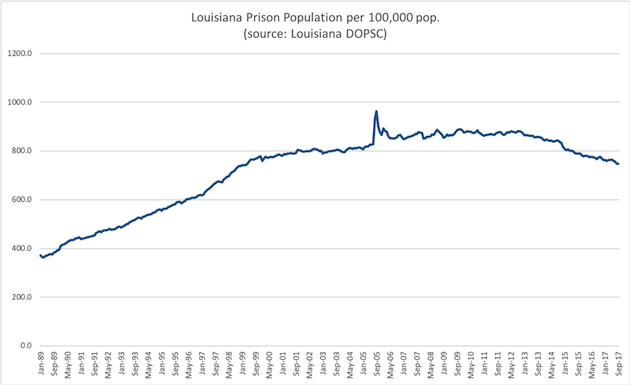 Notably, the most recent numbers show that 66 percent of that population is black, more than twice the proportion of black Louisianans in the Louisiana population.

This over-incarceration problem is exacerbated by high recidivism rates—the most recently available data project that around 45 percent of Louisianan offenders will reoffend within five years of release. It is an expensive endeavor: An official estimate suggests that Louisiana spends $700 million annually on corrections.

James M. LeBlanc, the Secretary of the Louisiana Department of Public Safety and Corrections (DOPSC), saw this over-incarceration situation as a challenge to be met, rather than a threat to be avoided.

"Having the highest incarceration rate in the world is not something we're stuck with and trying to get out of, with good reason, and doing it in the right fashion. I feel good about where we are at this point," LeBlanc told the Free Beacon.

LeBlanc served as the Chair of the Louisiana Justice Reinvestment Task Force, a stakeholder group established in 2015 by the state legislature focused on cutting Louisianan incarceration, recidivism, and corrections costs.

The package of legislation produced by the task force—ten bills, subsequently passed by the Republican-controlled Louisiana state legislature and signed into law by Democratic Governor John Bel Edwards—promised to cut prison population by 10 percent and save $262 million over the next ten years.

The bills are expected to do so through a variety of reforms, according to a Pew Research analysis. Most prominent are the sentencing reforms: The package lowers the proportion of an incarceree's sentence after which he can become parole eligible or be released on good time. It also restructures some statutes to make them nonviolent, and reconfigures drug sentencing.

Although not long-implemented, the laws have met with the approval of pro-reform voices like Pew, which worked with the state on designing its changes. They've also been backed by pro-reform conservatives like Mark Holden, general counsel of Koch Industries and a prison reform advocate who was in the room at a recent White House meeting on prison reform.

"It’s about time Louisiana did some reforms, it had never done them. They needed them badly," Holden told the Free Beacon.

Many of those reforms are only beginning to be implemented. The most recent, and most controversial, implementation has been the November 2017 release of some 1,900 prisoners under retroactive application of new, looser sentencing rules. Of those who were released in November, 76 have reoffended thus far. LeBlanc noted that a large proportion of the released offenders would have been released within 30 to 60 days of their release.

Unsurprisingly, the changes have met with some pushback. Louisiana law enforcement officers were skittish about the impact of the mass release, and Sen. John Kennedy (R., La.) slammed his state's changes as "an unqualified disaster" in a Senate Judiciary Committee meeting last month. (Kennedy's office did not offer clarifying comment on his statement when requested for this story.)

Kennedy's comment earned a sharp rebuke from Gov. Edwards, in the form of a lengthy letter to the Judiciary Committee. LeBlanc told the Free Beacon that he also felt Kennedy's criticisms were at the very least premature.

"I know Senator Kennedy made some comments that it's been a failure. Well, it hasn't started. Give us an opportunity to do what we say we're going to do," LeBlanc said.

Still, concerns about the bill's changes may not be unwarranted. As of 2016, Louisiana's violent and property crime rates remain high by comparison to other states—fifth- and fourth-highest out of 50, respectively. New Orleans-based criminologist Jeff Asher noted that in 2016, Louisiana had the highest murder rate of any state for 28 consecutive years. Further, although not evidence of a causal relationship, there is a strong correlation between Louisiana’s rising imprisonment rate and declines in its violent crime rate. 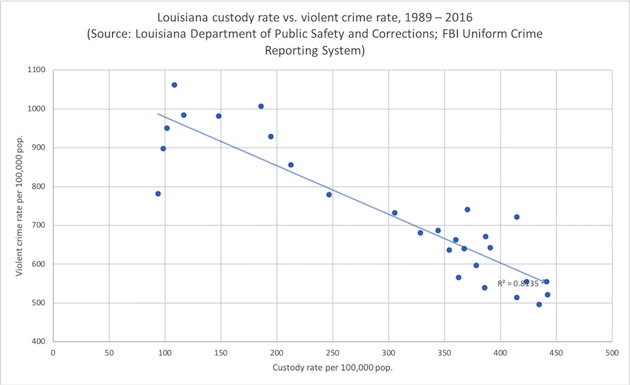 However, proponents of criminal justice reform are undeterred. They point to reforms in other states, where declining prison populations have not seen concurrent increases in crime rates.

"You look at Louisiana's metrics on crime rates and recidivism rates, and their amount of money spent on incarcerating people—if you compare what Louisiana did to, for example, South Carolina and Georgia, which each have enacted comprehensive reforms in a really thoughtful way, they’re spending—Georgia and South Carolina—a lot less on their systems. They have lower recidivism rates, and lower crime rates," Holden said.

Both Holden and Le Blanc say there is still work to be done. Holden emphasized that the state needed to turn its attention to prison and reentry reform, with an eye towards curbing Louisiana's sky-high recidivism rate.

Le Blanc emphasized that much of the lack of prison programming and anti-recidivism intervention is because so many Louisianan inmates are held in local jails, rather than in state prisons. Data from the DOPSC show the share of inmates held in local jails has grown conspicuously over the years. 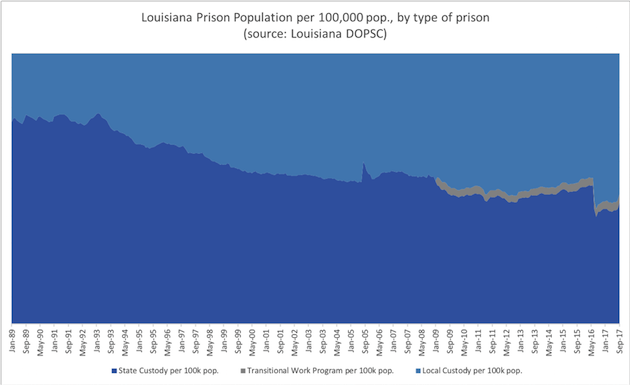 The growth of Louisiana's local jail population is especially noteworthy given the national trend of overall decline. LeBlanc explained that a major priority of DOPSC going forward is adding programming at the local level, to reduce recidivism from these jails.

"We have the highest incarceration rate in the world, and I think a lot of that is because we house inmates at the local level with little or no programming for the first part," Le Blanc said. "That's just a recipe for disaster. And we have got to change that … our largest parish jails, we need to bring up to state prison level operation, with vocational programming, educational programming, the things that need attention for these people going back to our communities."

Such overhauls make Louisiana a testing ground for the sort of prison reform that the Trump administration has said is one of its priorities. President Donald Trump sent his priorities for prison reform to Congress on Wednesday—as in Louisiana, they are focused on cutting recidivism and easing the burden of reentry. 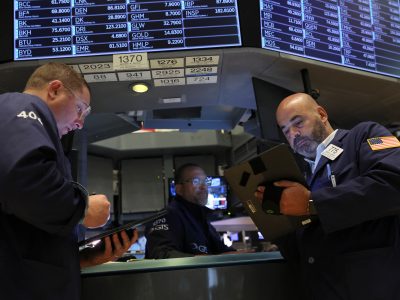