The FBI on Friday arrested a man in St. Louis, Missouri accused of making at least eight threats against Jewish Community Centers and schools across the country.

Juan Thompson, 31, is not the prime suspect behind this year's spate of bomb threats against Jewish centers, nor do authorities believe he is the only one responsible, but federal prosecutors are accusing him of launching a "campaign to harass and intimidate."

Thompson allegedly made eight threats against Jewish Community Centers (JCCs), a Jewish museum, and the Anti-Defamation League, according to the complaint filed by the U.S. attorney's office in Manhattan. Some of the threats were in his name while others were in the name of an ex-girlfriend from New York City, who Thompson is accused of cyber stalking.

The charge of cyber stalking carries a maximum sentence of five years in prison.

Thompson previously worked as a reporter for The Intercept, a left-wing website, from late 2014 to early 2016, when he was fired for fabricating sources in his articles, according to editor in chief Betsy Reed.

Reed said in a statement Friday she was "horrified" to learn of Thompson's arrest in relation to the bomb threats.

The suspect allegedly made the threats from Jan. 28 to Feb. 22 against JCCs and Jewish schools in New York, Michigan, Dallas, and San Diego, the Anti-Defamation League office in New York, and a Jewish history museum in New York.

Jewish centers across the country have been on edge as more than 100 have been forced to evacuate after receiving bomb threats in five separate waves this year. The most recent threats occurred  on Monday, when 21 bomb threats were called in to 13 Jewish Community Centers and eight Jewish schools in several states.

Activists are concerned that the bomb threats are part of rising anti-Semitism inside the United States. Last month dozens of headstones were vandalized at a Jewish cemetery in the St. Louis area. Two other Jewish cemeteries have been desecrated since Feb. 20–one in Rochester, New York, and the other in Philadelphia.

Authorities believe Thompson was a "copycat" who made the series of threats to harass a woman with whom he had a former romantic relationship.

In one instance, Thompson allegedly emailed a JCC in San Diego saying the woman wanted to "kill as many Jews asap."

"Today, we have charged Juan Thompson with allegedly stalking a former romantic interest by, among other things, making bomb threats in her name to Jewish Community Centers and to the Anti-Defamation League," U.S. Attorney for the Southern District of New York Preet Bharara said Friday, according to NBC 4. "Threats of violence targeting people and places based on religion or race–whatever the motivation–are unacceptable, un-American, and criminal."

"The defendant allegedly caused havoc, expending hundreds of hours of police and law enforcement resources to respond and investigate these threats," he said. "We will continue to pursue those who peddle fear, making false claims about serious crimes."

Jonathan Greenblatt, the CEO of the Anti-Defamation League, which fights against anti-Semitism, thanked the FBI and NYPD for arresting Thompson.

.@FBI,@NYPDnews,@nyspolice informed us arrest made in #bombthreat vs ADL & several other #Jewish institutions. Thx to them for amazing work

A Twitter account that appears to be Thompson's tweeted a series of messages in recent days disparaging a woman and accusing her of trying to hurt him.

Know any good lawyers? Need to stop this nasty/racist #whitegirl I dated who sent a bomb threat in my name & wants me to be raped in jail. pic.twitter.com/B1IU0RkNCZ

The @SecretService visited me looked at my tweets, questioned my politics b/c some awful white woman I date reported me. I won't be silenced 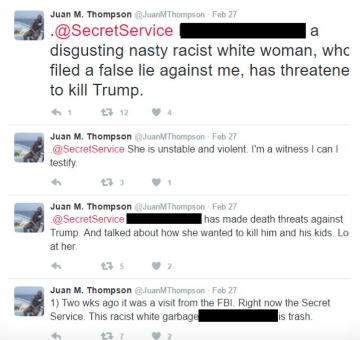 While at The Intercept, Thompson spoke on a panel in June 2015 about "the media's obsession with scandal and sensationalism instead of focusing on the lives of colored youth covering real news," according to the YouTube video description.