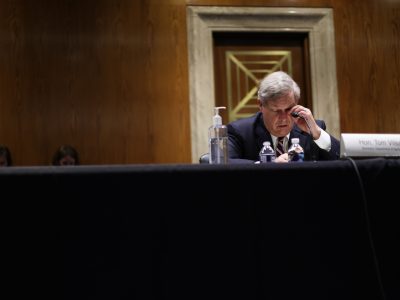 United States Department of Agriculture (USDA) secretary Tom Vilsack recently engaged in conduct that may have violated the Hatch Act, according to documents obtained by the Washington Free Beacon.

Vilsack’s conduct is the latest in a series of potential Hatch Act violations by Obama administration officials.

On April 4, Vilsack sent out an internal memo to USDA employees. The memo, obtained by the Washington Free Beacon, compared the impact that President Obama’s 2013 budget and the House Republican 2013 budget would have on the department.

Vilsack noted that the president’s budget 'included a slight increase for USDA’s discretionary budget." Vilsack also noted that 'the President’s budget, while more than our budget this year" would still cause 'things to be tight" at the USDA, and that the department 'would have to continue on our path of belt tightening."

Vilsack’s memo called USDA employees to action in response to the budget concerns: 'As I have said on many occasions the budget challenges we face are unprecedented. It is part of the reason why we must build an improved USDA through cultural transformation and our work to improve administrative services as part of the Blueprint for Stronger Service … I will continue to keep you advised as the budget discussions unfold."

An insider close to the situation says, 'It is a borderline Hatch Act violation and definitely a political tactic to scare employees into thinking they are losing their jobs because of Republicans."

The Hatch Act prohibits campaign activity, including fundraising, by federal employees. The law states: "[N]o officer or employee in the Executive Branch of the Federal government, or in any agency or department thereof, shall take any active part in political management or in political campaigns."

The Hatch Act also prohibits presidential appointees with Senate confirmation (PAS), like Vilsack, to 'ask his subordinates or employees to contact and/or liaison with a political party to find out where, or if, the party needs the PAS’ help."

Legal expert Richard Painter tells the Free Beacon that Vilsack’s memo raises concerns but does not likely constitute a direct Hatch Act violation as he avoided advising his employees to specifically support the Democratic Party in a partisan election. 'I would watch these memos," Painter said. 'These memos are probably going to push the envelope more and more. (The public) should watch to see if Vilsack or other officials make direct references to elections."

Plouffe recently engaged in activity that may have violated the Hatch Act and raises significant questions about the close relationship between the White House and President Obama’s 2012 re-election campaign, legal experts tell the Washington Free Beacon.

On Mar. 19, Plouffe appeared at a 'prospecting meeting" at the Yale Club in Manhattan for Priorities USA Action, the super PAC affiliated with the president’s reelection campaign. He reportedly spoke to 'about two dozen major Democratic donors" about rival GOP fundraising efforts.

While sources told Politico that Plouffe 'did not make a direct ask for money," in his speech he compared, in detail, Republican and Democratic fundraising efforts during the 2012 election cycle. The super PAC had also recently rededicated itself to fundraising, hiring former America Coming Together heavyweight Diana Rogalle several weeks prior to Plouffe’s appearance.

As a political appointee of the president who did not receive Senate confirmation, Plouffe may be granted 'special considerations" allowing for more flexibility under the terms of the Hatch Act.

According to Section 7324 of the Act, which was added as a Hatch Act amendment in 1993 under President Clinton, an exemption to the ban is offered to 'employees paid from an appropriation for the Executive Office of the President."

This exemption allows for political appointees like Plouffe to conduct political business in government buildings during daylight hours. 'It sounds like (Plouffe) was making a concerted effort to stay in the gray area," legal expert Trevor Potter told the Free Beacon.

Richard Painter does not believe that the exemption applies to protect Plouffe’s actions, however.

'If (Plouffe) went to an event to tell some Democratic donors about how much money the Republicans are raising, and clearly making the point that Democrats need to raise as much money—in my mind, that is a violation of the Hatch Act," Painter said.

A former associate counsel to the president during the George W. Bush administration, Painter said, 'In my own view, it is a violation to talk about the campaign money raised at the event from the attendees, or to talk about competing campaign money raised by opponents if the communication is intended to persuade the attendees to give more money."

'My advice while at the Bush White House was ‘never talk about the money,’" he said. 'Plouffe either violated the Act or was so close to the line that he created an appearance of serious impropriety by in effect asking people for money."

Sebelius said in her address, 'Your lieutenant governor, Walter Dalton—who needs to be the next governor of North Carolina—is in the house."

According to HHS, Sebelius attended the event in her official capacity as an administration official, though Sebelius agreed to refund taxpayers for the cost of her trip.

According to an HHS spokesman, "The Secretary attended the Human Rights Campaign dinner in Charlotte to highlight the work of the U.S. Department of Health & Human Services on LGBT issues. The trip included political components, and so the federal government will not be paying for it."

The Kerry campaign brought together five widows of Sep. 11 victims to condemn Rice’s activities. "Her time would be far better spent tracking down Osama bin Laden and Al Qaeda terrorists—the people who killed our husbands—and pushing for full adoption of the 9/11 commission recommendations," said the widows.