Rep. Debbie Mucarsel-Powell (D., Fla.) invited a panelist to an immigration town hall this July who is an #AbolishICE stalwart and is also an active member of the Democratic Socialists of America (DSA) political party.

The invitation came despite her opposition to socialism and the abolishment of Immigration and Customs Enforcement (ICE), a position increasingly embraced by the far Left.

Mucarsel-Powell came out against abolishing ICE during her 2018 campaign to represent a South Florida district that houses many Latino voters who have fled or are descendants of those who have fled socialist or communist regimes in Central America. And socialism has already taken center stage for Republicans hoping to flip the seat red in 2020.

One announced challenger, Irina Vilariño, is primed to run a campaign targeting socialism.

Mucarsel-Powell took a more moderate stance on immigration in 2018.

"Abolishing ICE is not the answer," Mucarsel-Powell told the Miami Herald. "I believe the agency must correct its abuses and should dedicate its staff to protecting the country from actual threats, like child exploitation, human trafficking, and drug-related crimes, instead of attempting to induce fear in immigrant communities."

But several of the photos Murcasel-Powell tweeted of the town hall held at Florida International University on July 2 show the socialist #AbolishICE activist, Thomas Kennedy, seated at the panelist table just one seat away from the freshman congresswoman.

Truly enjoyed our #immigration town hall @FIU tonight with members of the Cuban, Venezuelan, Nicaraguan and other Latin American communities. We have such a diverse community in #FL26, and I will continue to work hard in Washington to represent everyone. pic.twitter.com/ufwTVmPuUP

Kennedy was invited as part of the Florida Immigrant Coalition, where he is a political director, but he is shown on social media as a vocal activist for socialism and the abolishment of ICE. Roughly a year before the event, the Miami DSA Facebook featured a posted picture of Kennedy at an #AbolishICE protest. 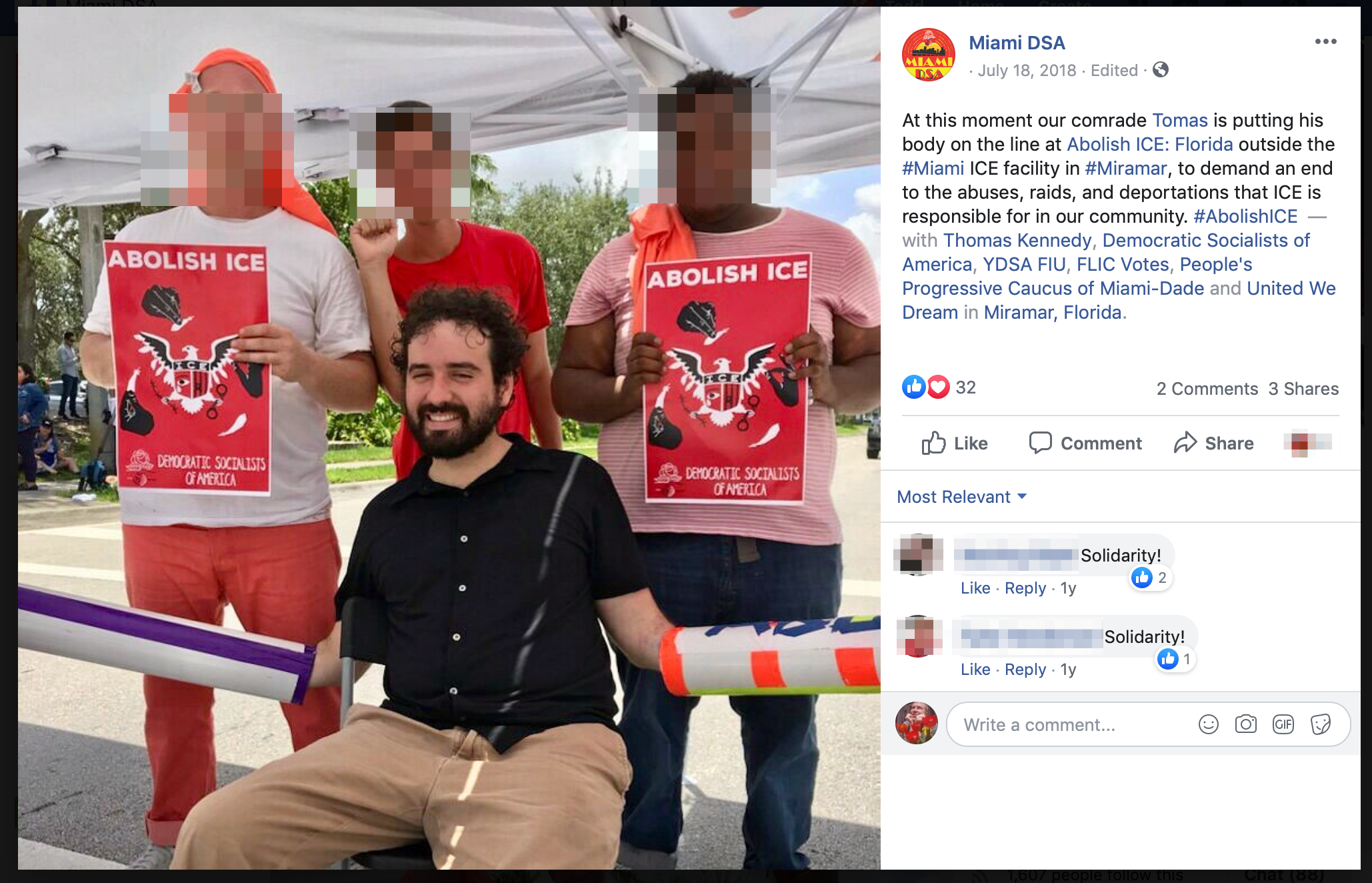 "At this moment our comrade Tomas is putting his body on the line at Abolish ICE: Florida outside the #Miami ICE facility in #Miramar, to demand an end to the abuses, raids, and deportations that ICE is responsible for in our community. #AbolishICE," the Miami DSA Facebook page read in July 2018.

Seventeen people were arrested that day, and Kennedy boasted on his own Facebook page of being among that group.

Kennedy has been called "comrade" on the Miami DSA Facebook page, and appeared in a group photo of other DSA members captioned, "Badasses of the Revolution."

Requests for comment to Kennedy were either not returned or unsuccessful.

Other elements of the Miami DSA Facebook webpage voice support for the abolition of prisons, support for the Boycott, Divest, and Sanctions (BDS) movement against Israel, and "national rent control."

Both the national and Miami DSA webpages give a nod to one of the socialist party's key ideas: eliminating capitalism.

"As we are unlikely to see an immediate end to capitalism tomorrow, DSA fights for reforms today that will weaken the power of corporations and increase the power of working people," both organizations say.

Rep. Mucarsel-Powell did not respond to a request for comment from the Washington Free Beacon, which asked whether she has shifted her position on abolishing ICE or if she shares any sympathies with the Democratic Socialists of America Party.

According to her campaign website, Mucarsel-Powell is a first-generation American having emigrated from Ecuador. Socialism remains a top concern for many Latino voters in the district she represents.

"In and around Miami, seven hundred thousand Cubans are eligible to vote, along with a hundred and sixty thousand Colombians, eighty thousand Nicaraguans, and some fifty thousand Venezuelans," a recent report from the New Yorker noted. "Republicans, and especially Trump, have seized on this fact to relentlessly attack left-wing populists in Central and South America."

The article also quoted an anonymous State Department official as saying, "The Trump Administration's Latin America policy has become all about Florida."

On the presidential campaign trail, Vermont socialist senator Bernie Sanders (I.) recently said he is not in favor of abolishing ICE. Sanders has received heavy support from the DSA.