As California moves forward with a plan to phase out private prisons in eight years, state Democrats have no plan for how to deal with the 1,600 inmates housed in such facilities.

Governor Gavin Newsom signed a law last month that will abolish all private prisons by 2028. One of the bill's supporters, California representative Mike Levin, admitted to constituents that California policymakers "don't know" how the state will accommodate the hundreds of prisoners who currently live in private prisons.

"We're going to have to write a letter to figure out exactly how this is going to be implemented, but those facilities, I believe, will close," Levin said at an October town hall. "I wonder what happens to the 1,500 people there right now. We are in a bit of uncharted territory to this because we just passed this law."

Levin's concession is symbolic of the larger tension between the two competing goals that California's prison system must now pursue. On the one hand, the new private prison ban will force the state to close private facilities, lowering the system's inmate capacity. On the other hand, abolishing private prisons might return the state to dangerous levels of overcrowding that former Supreme Court justice Anthony Kennedy said was a "serious constitutional violation."

The Supreme Court ruled in 2011 that California's prisons were too crowded to provide adequate health care to inmates and ordered the state to reduce overcrowding by releasing prisoners and expanding capacity. Kennedy, delivering the majority opinion, said that a California prisoner died of preventable or possibly preventable causes every five to six days. Such conditions violated the Eighth Amendment prohibition on "cruel and unusual punishments," according to the 5-4 ruling.

"For years the medical and mental health care provided by California’s prisons has fallen short of minimum constitutional requirements and has failed to meet prisoners' basic health needs," the majority opinion read. "Needless suffering and death have been the well documented result."

California signed contracts with leading private prison companies to house thousands of inmates to reduce overcrowding, according to court filings. The new private prisons, coupled with legal reform that reduced sentences and other tweaks, decreased the state's prison occupancy rate from an all-time high of 200 percent to 135 percent today—just under the 137.5 percent threshold established by the Supreme Court. Newsom himself acknowledged the role private prisons played in bringing down the prison occupancy rate.

"Private, for-profit prisons have been used for many years to help the state overcome prison overcrowding challenges, but it is time to end our reliance on them," Newsom said in September, one month before he signed into law the private prison ban.

The prison ban law acknowledges the need to keep overcrowding under the legal limit. California will not be allowed to renew or enter into new contracts with for-profit prison companies starting in 2020 unless they are needed to keep the prison population under the Supreme Court's cap. But by 2028, all private prisons must go, even if doing so would potentially violate the ruling.

Wilkes said the law would end up hurting California inmates more than it would help them.

"What the California ban could end up doing is moving detainees far away from their families or into lower-quality facilities like local jails where they are forced to live amongst charged and convicted criminals rather than a modern civil facility with health care and legal support and other resources," she said.

How America Arrived at the Cruel New Normal 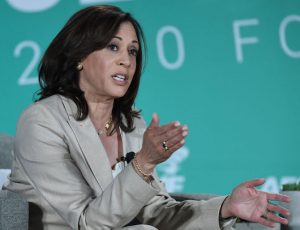