New York City mayoral candidate Maya Wiley (D.) hosted an event for anti-Semitic activist Linda Sarsour in 2017, calling her "one of the most thoughtful and strong but also gentle people I know."

Wiley, a professor and senior vice president for social justice at The New School who has been climbing in the Democratic primary polls, invited Sarsour to speak at the university for a fall 2017 semester course titled "Race in the U.S."

The lecture—which came after Sarsour claimed that pro-Israel women couldn’t be feminists and gave a speech at a 2015 rally thrown by anti-Semitic preacher Louis Farrakhan—could prove to be an obstacle for Wiley in a city with a large pro-Israel community. Sarsour’s comments on Israel and support for the Boycott, Divestment, and Sanctions movement have drawn controversy, as well as condemnation from many prominent Democrats. Last year, President Joe Biden issued a statement saying he "condemns her views and opposes BDS," after Sarsour appeared on a conference call for Muslim activists who were backing his campaign.

Wiley gave Sarsour a warm introduction at the September 2017 lecture on "Race in the U.S." and indicated that the two had a close relationship.

"I, from a personal standpoint, am so honored that Linda is here with us today," said Wiley during the introduction. "She is someone whose generosity of spirit and courage are things, I think, that we should celebrate in this country."

"I also want to say that she’s one of the most thoughtful and strong, but also gentle, people I know. And I say that because if you read accounts of her it really paints her in a way that is not a Linda that I know or recognize," added Wiley. "I think it’s an important opportunity to actually help see the human side of Linda Sarsour because she is a deep and important human being."

Sarsour said at the event that she was "an admirer of [Wiley’s] for so many years and had the privilege of working with her in many different times of my very short life."

Sarsour’s speech addressed her personal experience with anti-Islam bigotry in the wake of the September 11 attacks. She took aim at the Trump administration, arguing that there are "people who are actually neo-Nazis, or actually I’d say Nazis" in the White House.

She also defended herself against allegations that she is anti-Semitic, arguing: "By default, if you are a critic of the state of Israel, for some people, you are [attacked as] an anti-Semite."

Sarsour, who helped organize the January 2017 Women’s March to protest the Trump administration in Washington, D.C., is a vocal opponent of Israel and often attempts to tie her other activism to the anti-Israel cause.

In March 2017, she argued that feminism is incompatible with supporting Israel.

"It just doesn’t make any sense for someone to say, ‘Is there room for people [in the Women’s March] who support the state of Israel and do not criticize it in the movement?’ There can’t be in feminism," said Sarsour in an interview with the Nation. "You either stand up for the rights of all women, including Palestinians, or none. There’s just no way around it."

She also spoke at the 2015 Justice or Else rally organized by Louis Farrakhan, the Nation of Islam leader who has called Jews "termites" and "satanic."

Sarsour has said on Twitter that "Nothing is creepier than Zionism," and claimed that pro-Israel Democrats who criticize her are "folks who masquerade as progressives but always choose their allegiance to Israel over their commitment to democracy and free speech."

In 2019, she equated Israel supporters with white supremacists. "How can you be against white supremacy in America and the idea of being in a state based on race and class, but then you support a state like Israel that is based on supremacy, that is built on the idea that Jews are supreme to everyone else," she said.

Wiley, a former aide to New York City mayor Bill de Blasio, is polling in second place in the Democratic primary, after frontrunner Eric Adams, according to an Emerson College poll released last week. She has also been racking up endorsements from progressive leaders, including Sen. Elizabeth Warren (D., Mass.) and Rep. Alexandria Ocasio-Cortez (D., N.Y.). 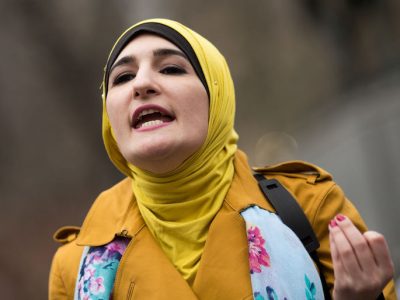