Within hours of announcing her Senate bid, Rep. Val Demings (D., Fla.) committed a blatant ethics violation, according to a congressional watchdog.

Demings used her official Twitter account, which has more than 300,000 followers, to direct people to her far less popular campaign account. The tweet, which was pinned to the top of her timeline before it was deleted by Demings, was in violation of House rules banning the use of taxpayer-funded resources for campaign purposes, according to a complaint filed by the Foundation for Accountability and Civic Trust (FACT). 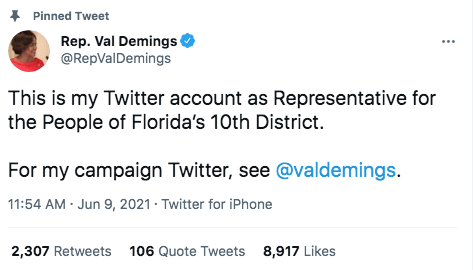 "Demings has committed a clear violation by using her official account to link to her campaign account," FACT wrote in a complaint to the Office of Congressional Ethics. "This rule enforces an important foundational principle: Members cannot use their official position or taxpayer-funded resources for political gain."

Hours after the Free Beacon reached out to Demings on Wednesday, the Florida congresswoman deleted the June 9 post, which had already gained thousands of retweets. The Free Beacon captured a screenshot of it before it was deleted on Wednesday evening. Demings did not respond to a request for comment on the complaint.

The watchdog group called on the ethics office to investigate what it called an "ongoing ethics violation." The tweet remained pinned to the top of her timeline at the time FACT sent its complaint.

"The Office of Congressional Ethics is responsible for ensuring each representative fulfills the public trust inherent to the office and complies with the House's ethical standards," the complaint says. "Therefore, we urge the Board to immediately investigate and stop Representative Demings's ongoing ethics violations."

Demings is considered a long-shot to unseat Rubio, who has held the seat since 2011.